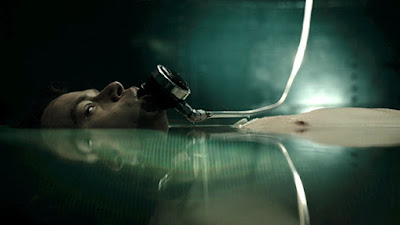 I like weird things. I like going to the Mutter museum and staring at deformed fetuses in glass jars. I like the scene in The Abominable Dr. Phibes where we see how Vincent Price's skull-face is hidden under his human mask. Well so clearly does the director Gore Verbinski, but Gore Verbinski has never met a fun scary idea that he couldn't just strangle the fuck dead. A Cure For Wellness could have been an entertaining 90 minute creep-fest but instead what we get is going on three hours of interminable incoherent bullshit.

Oh Verbinski certainly has a way with dream-like imagery - the endless corridors of a steam-bath haunted by four-legged creatures and black pools of water; a manic dance of white robes swirling and twirling fiendishly. They just don't add up to anything. Wellness is kind of like if the videotape from The Ring had been one of those 90s two cassette bundles like how James Cameron's Titanic was packaged - its just that by the time the curse has gotten to you you've already fallen asleep out of boredom. 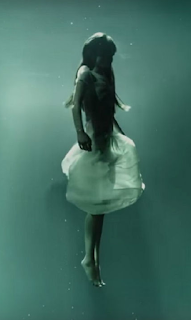 He also doesn't know how to make his nightmare logic consistent -  watch something like Suspiria and yes, what the characters do might not make any sense, but there's a horrible inevitability to it; it makes its own fateful sort of irresistible sense. Nothing anybody does in A Cure For Wellness makes the slightest lick of sense but there's no captivating mystery to it; I could have written the entire movie after the first 20 minutes of set-up. Instead it just feels as if the film was filmed enough to make twelve versions and then they grabbed the footage off the floor in armfuls and said, "This will do! This is movie shaped!"

It's got a terrible case of Wander-Around-icitis - Dane DeHaan could've gotten to the bottom of what's going on if he'd simply ended any conversation he begins, instead of mid-conversation just walking off in another direction on some random tangent. And that's all that ever happens - the laziness on display in keeping him going in circles is staggering. There's just not enough mystery to unravel though, so he just walks in circles, hitting the same notes again and again and again until I just wanted to go set the damn castle on fire myself so we could get to the end we'd seen coming for hours.

The frustrating thing is that Verbinski does like the things I like and a good movie could have been assembled with these ideas... if he hadn't been in charge. Watching Wellness I thought often of what Ken Russell - an actual mad-man - would've done with this material. But everything Verbinski does, even down to the most deviant, feels worn to the nub, as if he and a boardroom of executives drew up pie-charts and diagrams about how much tooth-abuse or incest was a millisecond too much. His weirdness is by committee.

And he's a humorless filmmaker, so a role that Vincent Price would've gloriously sissified up here gets turned into a black hole of anti-charisma by Jason Isaacs in a parade of starchy white jackets. We know thanks to Harry Potter that Isaacs is game for some sneering camp, so its clear direction was at fault, especially since it sucks the like out of Dane DeHaan as well - these are actors possible of flourish, of having actual derangement in their eyes, but A Cure For Wellness isn't interested. It's anesthesia for the imagination. 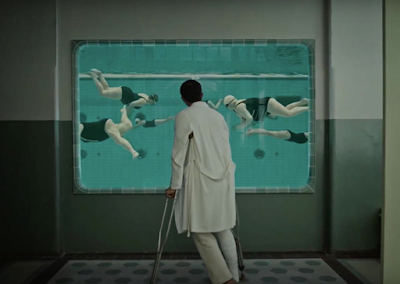