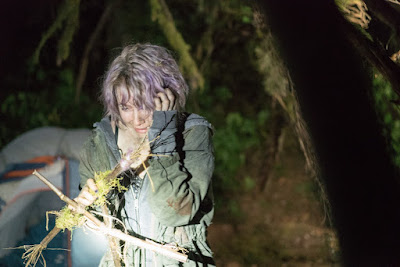 So the new Blair Witch generally had an easy way to go of it with scaring me. The original film scared the ever-loving bejesus out of me in 1999, even though I knew every last second of it was staged while watching it, because I am a sucker and a sucker's half for the stuff it was offering up. That original film also had the benefit of three terrific and underrated performances, desperate and unhinged with sincere terror pulsing beneath them - you could see it in Heather and Josh and Mike's wild eyes, the exhaustion and dampness and up-to-here irritation. That'll happen when your directors are sadists banging on your tent and howling at the moon in the middle of the night. Dance, monkeys, for our devious and depraved delight.

But the 1999 film also had one great big whopper of a thing going for it that Adam Wingard's sequel does not, and maybe could not - strangeness. When Heather and Josh and Mike find those piles of rocks outside their tent, and then the little stick figures, that shit was weird. Strange, uncanny, and off-putting. I mean it was, in reality, a pile of sticks and stones. That's all! Maybe there was a spattering of blood there, who knows. But shit was weird. 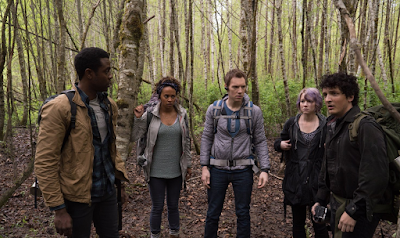 And when that last shot smacked us all upside our faces, shrieks echoing off cold stone, if we were one of the lucky ones vibing on the movie, well that shot stuck its fingers into our ears, burrowed on up into our cranium, and built itself a nice little nightmare home for itself. It was just a man standing in a corner, after all. But what a man and what a corner and what what what what what what what!

Blair Witch, the 2016 version, does not hold this advantage. And it falters for that. It has the woods and it has the sticks and the stones and it worked, for me, when it allowed itself to relax into those primal places. Make me lean forward and listen without knowing what I am listening to or for, and make me do it too hard and for too long, and you're gonna get me. (Also mad props to the film for that tunnel scene. Claustrophobia is my other great big blinking fear button, and Wingard pushed that one hard. Total Descent-ish horrors unfurled!)

But its stabs at uncanny were mainly retreads, and uncanny cannot, by definition, feel familiar. Even if you tweak the stream to be full of foot-monsters, and if you make the tents rocket up into the skies, and even if you go to Spain and put the attic-monster Niña Medeiros from [REC] on a plane and fly her to the Baltimore woods so she can pop out from behind doorways like a gangly jack-in-the-box full of nothing but elbows, even if you do these things there's still only half of a haunting to hang onto.

And that's a problem, and probably a problem a sequel cannot, by definition, overcome. In theory the best sequels make this work for themselves by ratcheting up what did work to eleven - Aliens is Alien squared, et cetera. The [REC] sequels, speaking of, made that bigness work for themselves too, by turning the essence of what we thought the first movie was about, on its head. The second film's basically an inversion of the first, and the third one's something new altogether.

But with a film like The Blair Witch Project whose inherent pleasures are so very plain and very very ordinary - just a pile of sticks, for fuck's sake - the friction between simplicity and brand new great big mega-scares and tents shooting up into the sky ends up coming down scattershot. I felt a prick or two, but I walked out of these woods relatively unscathed, sad to say. 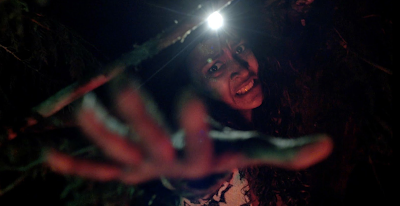 this makes me so sad... I will definitely go see it this weekend, but man! What a disappointing review to read. The buzz was so loud for this film what with the rottentomatoes thingy giving it almost 100% at first. In wide release, the reviews just sunk like a rock. Boo.

Well-written review, and dead-on accurate. I found myself amazed that they thought those sticks were gonna scare us again.

Biggest disappointment in a long time. However, there were some intriguing things going on with time etc. shame that wasn´t developed more.

It's Cold Outside said...

I actually loved it..spoiler alert.. They let you see the witch a little, PETRIFYING.