I caught James Whale's The Bride of Frankenstein on TCM this past weekend and every time that happens not a week can pass without me digging out my copy of Mel Brooks' 1974 film Young Frankenstein to complete the set -- well with Gene Wilder's death yesterday this took on a sad urgency. I'm glad to say that even with that spectre cast upon it the film still had me crying with laughter, and I knew once I was reminded of this scene we'd be posting it today. Here:
.

.
One thing I wanted to note on this movie that I haven't entirely formulated out in my head but I figure it's now or never what with the way my attention span's dissolved into non-existence -- the roles for the actresses in Young Frankenstein (the tremendous trifecta of Teri Garr, Madeline Kahn, and Cloris Leachman) are as funny, if not funnier, than the men's.

I suppose in a sane world such things wouldn't need to be pointed out, but this is a film written and directed by men, as so many are, and these days it feels so novel (case in point: Rose Byrne in the Neighbors movies) when a woman's given anything to do in a boy's movie that watching this movie from 1974 kind of felt like a revelation seen through today's lens.

Granted we're talking about comic-actresses with the chops of Teri Garr, Madeline Kahn, and Cloris Leachman here! And they were often the best things in movies that were paying less attention to them, too. But give 'em the chance and pow bang right in the schwanzstucker. And we have (many, many) comic-actresses out there today capable of these comic heights. We just gotta stop sticking them in shitty roles -- we've regressed in such odd ways, in some ways. Let's stop it. 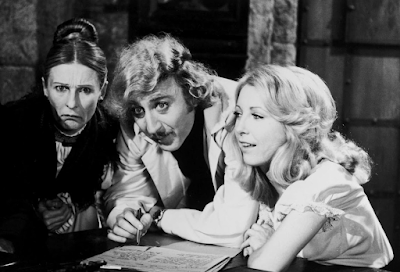 I know people have been mostly "WILLY WONKA!" the past 24 hours, but this was always my favorite Wilder performance, and the one that seems to me most emblematic of who he was as a performer - the madly committed madness, the perfectly modulated comic despair, the YELLING (if nothing else, Wilder was the funniest yeller in movies), AND he does a song and dance routine! The candle bit and the "I'm hysterical! And I'm WET!" bit from The Producers are the first two things I always think of when I think of funny movies (which I do often).

OH how I wish ANY of the brilliant cast of Young Frankenstein had gotten Oscar nominations... You're right of course that Terri, Madeline, and Cloris had parts that were every bit as great as the men's parts. I think part of that comes from the writers knowing that funny is funny, and that women and men don't have to be funny in different ways. Plus, I think Brooks was very into creating an ensemble feel, and that sadly doesn't happen much in comedies these days outside of same-gender ensemble films.