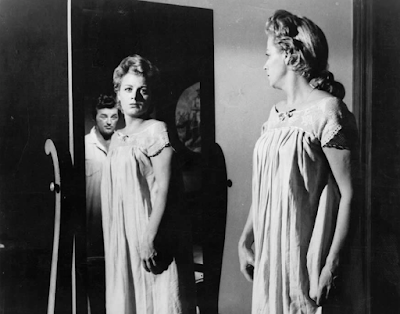 Willa: Harry?
Rev. Harry Powell: I was praying.
Willa: I'm sorry. I didn't know. I thought...
Rev. Harry Powell: You thought, Willa,
that the moment you walked in that door,
I'd start to paw at you in that abominable way
that men are supposed to do on their wedding night.
Ain't that right, now?
Willa: No, no, no.
Rev. Harry Powell: I think it's time we made one thing
perfectly clear, Willa. Marriage to me represents the
blending of two spirits in the sight of Heaven.
Get up, Willa.
Willa: Harry, what...?
Rev. Harry Powell: Get up. Now go look at yourself
yonder in that mirror. Do as I say. Look at yourself.
What do you see, girl? You see the body of a woman,
the temple of creation and motherhood.
You see the flesh of Eve that man since Adam has profaned.
That body was meant for begettin' children.
It was not meant for the lust of men!
Do you want more children, Willa?
Willa: I... no.
Rev. Harry Powell: It's the business of this marriage
to mind the two you have now. Not to beget more.
Alright, you can get in bed now. Stop shivering.
Willa: [praying] Help me to be clean,
so I can be what Harry wants me to be.


It almost doesn't feel right, using this specific movie to celebrate the fact that it's Shelley Winters' birthday today -- I mean she's very good in it, and if I was ever going to submit myself to that Twitter-meme about #7FavFilms this movie would probably be on that list and everything, but the character of Willa doesn't entirely feel representative of the Shelley Winters persona that we all know and cherish - her ferocious will and brashness and crassness are so pummeled into defeat, and so easily, here... before we even know what happened her "whole body's just a-quiverin' with cleanness," and then not long after it's to the river for her...

...  but I suppose that's the tragedy of her character (and the genius her casting) -- we all know the pop and pizazz that this lady's capable of but because of the ironclad asshole husband contract that Robert Mitchum represents, well, the firecracker of our own proper timeline will never get to be. Bollocks! Life without Big Brassy Shelley ain't worth the flesh it's writ upon! 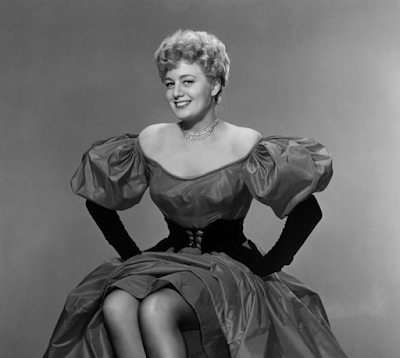 I've been working on seeing her earlier films and it's always something of a jolt when she first enters the film how stacked and sexual she was. Her face always had that roundness but early on she was whippet thin. If you ever have the chance to see either Larceny or Frenchie do not miss them. Especially Frenchie where she's a befeathered dance hall girl in vivid Technicolor and her companion is an equally dolled up Elsa Lanchester.

Have you seen A Double Life or I Am a Camera? She plays the same role Marisa Beranson played in Cabaret. Julie Harris is marvelous as Sally Bowles. It's on YouTube. In A Double Life, she plays the Desdemona to Ronald Colman's Othello and it gets pretty grisly.