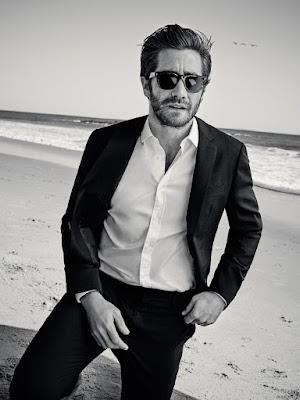 Listen. Jake Gyllenhaal's got bills to pay, just like the rest of us. Actually he's probably got bigger bills to pay because I wash my own underwear and I have a feeling that Jake Gyllenhaal probably doesn't wash his own underwear. (Note to Jake Gyllenhaal: I am willing to "wash" your underwear. For free. Going uphill both ways, in the rain.) So it's nice that he's taken a few years to up his indie cred and acting chops with great little flicks like Nightcrawler & Enemy, but he's got to pay the underwear-washer somehow so I get this:

"Following record-breaking sales, Ubisoft is already developing a movie based on its video game “Tom Clancy’s the Division,” and now looks to have an A-list star to lead the film. Sources tell Variety that Jake Gyllenhaal is attached to star in the pic based on the hit video game that has already become Ubisoft’s fastest-selling product. Gyllenhaal is also attached as a producer, and the studio is currently looking for a writer to pen the adaptation. Ubisoft could not be reached for comment.

Developed and published by Ubisoft, with assistance from Red Storm Entertainment, for Microsoft Windows, PlayStation 4 and Xbox One, the third-person shooter is set in a dystopian New York City in the aftermath of a smallpox pandemic. The player, who is an agent of the Strategic Homeland Division, commonly referred to as simply “The Division,” is tasked with helping to rebuild the Division’s operations in Manhattan, investigating the nature of the outbreak and combating criminal activity in its wake."


The last time Jake made a video-game movie's become sort of the punchline of his career, so of course we're all terrified we're staring down the barrel of another Prince of Persia. But it sounds like he's got more control over the project this time, so perhaps that will work out in his/our favor? I don't know this game (any of you play it?) but it sounds more real-world adjacent, and less CG spaghetti sauce. Hopefully they take a few costuming choices from Persia though. I didn't entirely mind some of those...

I play it! I really like it! It's not an "oh, this pandemic turned people into zombies" thing, but rather an "oh, this pandemic has nearly wiped out NYC" thing. You know, action, not horror. What's most surprising about it is that even though it's a friggin' Tom Clancy game, it's one of the most progressive I've ever played in terms of minority characters: women, men and women of color, and gays are all in abundance. It's sad but I doubt that will translate to a film version.

If it even gets to the screen–I know of plenty of video game adaptations that were announced but subsequently disappeared. Maybe JG's involvement will help with that?

Maybe! And yeah let's hope they manage to keep the diversity in place - casting a white male in the lead gets them halfway there! ;)