Just To Sprinkle Star Dust, And To Whisper 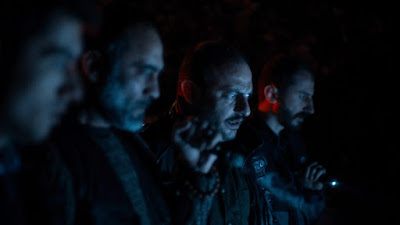 Picture it: Clive Barker can't sleep. He's spent all night sketching bloody sexy abominations in between watching Turkish Oil Wrestling videos on YouTube, and his head hurts. So he crushes up an Ambien and sprinkles it on top of some strawberry ice cream, too much strawberry ice cream, and before he knows it it's lights out.

Baskin is what he dreams.

What starts out as a Lynch-tinged foreign procedural, kind of Once Upon a Time in Anatolia shot by Dario Argento, gets beserker and bloodier as the blackness bleeds forth and the night fills with frogs, and frogs, and regret, and red gels, and frogs. I don't want to say a ton more because going in dark is a good bet, like I did, but know Baskin's not for the squeamish - it has the courage of its malignant convictions, and it will maim, mark, and molest those last little pockets of good thoughts left inside of you, laugh slash squealing like a stuck pig the whole wee wee way home.

Baskin is pain, beautifully red-streaked and eye-socketed, positively basking in it. A black and blue psychosis. Breathe, slowly, permanent breaths, and take it all inside of you. It will feel good, I promise.
.
Who? Jason Adams When? 4:35 PM