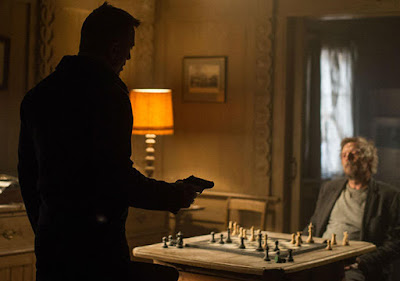 There's a hollow at the heart of Spectre that echoes outward - I could imagine Sam Mendes arguing it's intentional, that it externalizes Mr. Bond's ruined interior, carved out by so much loss, but it reads more as laziness. This movie feels like a paycheck, or perhaps if I want to be kinder than that, and I do, a victory lap after the outstanding success of Skyfall. I don't want to be unkind - there are actions scenes here that will grab you by the cliche and make you hold your breath til you're blue in the body parts. The skittering of computer-generated crowds of people have never been used to smarter effect than during the helicopter scene, for example.

But the music is just a little too loud, and most of the scenes a little too long - everybody poses nicely in their extraordinary outfits and hits their marks just right, but you get the ghost sensation of been there done that from everybody all the same. A weariness has settled over the doubles-ohs, making it more like the double oh-god-that-agains, and I don't think I'm projecting from Daniel Craig's real-world comments - the film feels heavier than it ought to, but like a clapboard wall Bond punches through at one point there's nothing substantial holding it up at this point. (Although the moment that sets up that moment, a silly rendezvous with a mouse of all things, points toward a levity I wish the movie found more time for.)

The nefarious revelations of dun-dun-dunnnn interconnectedness - tentacles upon tentacles! - are half-hearted at best, and weaksauce at worst; Christoph Waltz has been called upon to project sinister depth onto a lot of ridiculousness in his career but the word "cuckoo" seems one step too far, for him and for me. (And did he wander the hallways pinning up those photographs with yarn himself? The high-concept villain equivalent of scrap-booking?) And don't get me started on the way Andrew Scott's character is botched, nothing more than a sniveling afterthought as if they didn't decide until the editing process which way he was going, so he's left sighing and half-sneering in one glass corridor after another glass corridor after another glass corridor...

But sometimes Spectre flies! Really! Daniel Craig is a pit-bull person, even this weary, charging ahead through regular walls and train walls and glass walls and brick walls with some ice-eyed determination. His cast of compatriots are a brogue's gallery of individual etchings, all interesting in their own ways even if given not a lot to do here. And Léa Seydoux is the best Bond Girl since Eva Green (high praise coming from these Eva-obsessed quarters), meeting Craig on equal ground and pushing back with her own slinkier sort of push. Shame the story's ultimately such a pushover.
.
Who? Jason Adams When? 6:08 PM

I liked the interconnectedness but I think it would have worked better without the extra "past" connection (hard to avoid spoilers here, but I'm trying) because it adds an unnecessary layer of causality and intent that does not sit well at all.

Waltz's talents are so wasted here. He has a cat for God's sake... A CAT! I half expected Waltz to put his pinky to the corner of his mouth and start doing Dr. Evil. Still, two hours of Daniel Craig in tight pants is never bad