All The Cannibal Movie Reviews You Can Eat 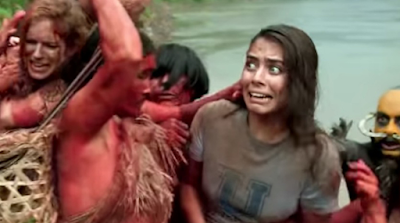 The Green Inferno -- What I want to say is going to come across as the sort of criticism that a Cannibal Movie should never be able to come back from, so let me start with saying that I mostly enjoyed Eli Roth's Cannibal Movie, even if it's about to sound like I did not enjoy Eli Roth's Cannibal Movie. Cuz what I want to say is that Eli Roth's Cannibal Movie never much shocked me, and seeing as how shock and awesomely grotesque horror is what you watch a Cannibal Movie for, you can see how that sounds like a fatal flaw. The Green Inferno plays more like a cover of something already pretty mediocre by a genuine enthusiast who's more technically proficient than the original band ever was. Cuz let's be clear - the 70s movies that Roth is riffing on are none of them good movies. Cannibal Holocaust is not a good movie, by any stretch of anyone's imagination. There's an illicit thing to them, a puffy-cased VHS back-room glow, a tingle in your inner thirteen-year-old's naughty center. And Eli taps into that but he makes it more goofy than it ever manages scary. I do have a deep appreciation for his dedication to straight-up Bad Taste though - nobody's made genital mutilation this sexy since Lars von Trier! (Put that on your poster and smoke it.) 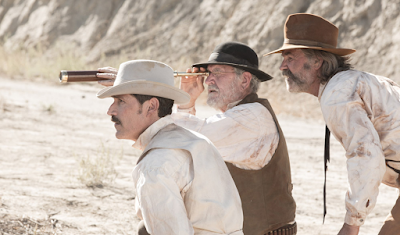 Bone Tomahawk -- So much more invested in establishing a real sense of atmosphere and of character than you ever expect a movie about cannibalistic troglodyte desert dwellers to ever be that that in itself ends up being the movie's biggest shock - its tangled up tumbleweed's pace takes its sweet time, measuring out the surprises by the endless dusty mile, not the millisecond. Giving actors like Kurt Russell and Patrick Wilson and Matthew Fox and especially Richard Jenkins the room to breathe, to make these Western Archetypes into fully-bloomed nowhere weirdos, it's a goddamned blessing to watch. If Jenkins' monologue about flea circuses isn't on every year-end-list of best scenes of the year then you know who you can trust or not by the reach of their appreciations. All that said, and that's a big all that, when this movie decides to stick its knife in oh my god does it twist and turn that thing, scraping it right along the bone clean. Great gobs of gore in its maw does it go for it. It'll play alongside Ravenous one day in some sicko's (mine it will be mine) favorite fleshy double-feature.
.
Who? Jason Adams When? 5:44 PM

Been thinking often about BONE TOMAHAWK and it's depiction of Indian violence. Truth be told the acts depicted in the film are not far from the truth. I'm not speaking about the cannilbalism but the horrible acts many tribes used against their enemies. Not only were many tribes fierce warriors but part of their battle involved humiliating the other. Bodies were found eviserated and the males member cut off and stuck in their mouth. The anus was often perforated and found with foreign objects inserted. Finally the victims were either cut in half or disembowled. The book The Searchers: The Making of an American Legend gives several examples. That book itself shows an accurate example of the "old west" which is so often glorified in film and not the scary dangerous place it was