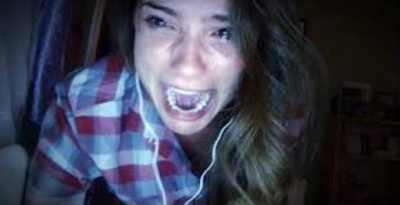 There were a lot of surprises in store for me with Unfriended. The first surprise was when it came out and everybody was all "Hey this somehow isn't the pile of derivative shit the trailers make it look like." That was a surprise. The second surprise, and this one only hit me upon having finally watched the movie last night on my laptop, emphasis on that last bit, was that the film apparently worked so well for people in the movie theater - I liked the movie a lot but I can't imagine what a theatrical viewing was like; I'd love to hear from any of you who may've seen it in the theater.

But watching the film with my laptop propped on my lap laying under the covers of my darkened bedroom, Unfriended was kind of a singular experience. Who'd have thunk it? Filmmakers keep trying to wring horror from of Our Technological Now even though it's proven itself a brick wall time and time again, but Russian director Leo Gabriadze went and made the brick wall his bitch.

He overwhelms our tech obsessive impulses - you know that physical sensation in your gut you get nowadays from the red dot of a Facebook message caught out of the corner of your eye? Unfriended makes that impulse the cyber equivalent of going into the basement or checking on a noise you heard outside - you just have to click, you gotta, there is no steeping back from the ledge no matter how dumb it makes you, death and dismemberment and heaven forbid defriending be damned.
.
Who? Jason Adams When? 3:30 PM
Labels: horror, reviews

I think one of the benefits of seeing it on a big screen was really being able to investigate that screen with all of its little tabs and windows and icons and the sound design constantly bringing in those booping skype sounds.

It really did not work on a big screen in my opinion, plus people need to learn how not to read out loud! I can read too, people.

We saw it in the theater. When I realized the camera would never stray away from the screen, I was annoyed. But then it didn't really matter. I watch so many things on a computer anyway so if anything it was *too* familiar of a why to watch a film.