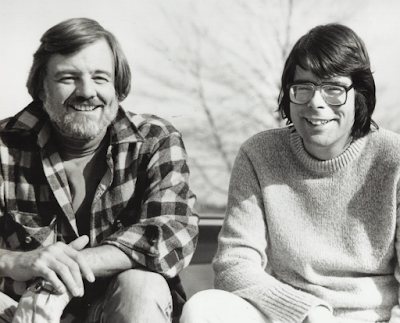 "We haven't been able to sell The Girl Who Loved Tom Gordon to anybody. I have been working on that, and recently wrote another draft of that, but nobody wants to do that. We can't get anyone interested. That and Gerald's Game. Those are the two I was interested in, but we can't get anyone."

-- That's living legend George Romero telling an audience at Wizard World in St. Louis last week that no Hollywood studio will give him the money to make movies out of the two Stephen King properties he's been wanting to make movies out of. I've never read Tom Gordon, which is about a little girl getting lost in the woods; have any of you? I have however read Gerald's Game, about a year or so ago, and there's one moment in it that scared me worse than anything has scared me in a very very long time. So fuck you Hollywood for having your heads shoved up your asses - Romero could make this movie for what it costs to ship Robert Downey Jr.s favorite sofa around everywhere. Imagination-less cretins.
.
Who? Jason Adams When? 5:13 PM

I've read it a couple of times. A friend of mine not only considers it her favorite King novel but also lists it among her favorite books of all time. I don't have that much love for it, but the quality that makes it less interesting to me personally--the smallness and intimacy of the it--is also what makes it a compelling and aptly observed story. It's also maybe the last time King wrote a child character that I buy. He used to be so, so good at it, and then suddenly he wasn't anymore.

If it involves a car, I know exactly what scared you. Because I banged my head against the back of the bed to try and get away from that book. One of his better ones.

I wonder if this would work better on Lifetime or Oxygen, hopefully with less cheese than they create.