Not only is this week "National Ride Your Bike To Work Week" (which The Film Experience has been celebrating all week and brought to our attention) but as I'm sure you're aware George Miller's new Mad Max movie subtitled Fury Road is out in theaters... well tonight, a lot of theaters are starting showing it tonight. Whoopee!

Yeah it seemed like a cheat not to include the shot of Mel Gibson running that follows the above sequence, since it's so well focused on what's important. George Miller, for all the testosterone, has always had a pretty gay eye. (And I can't wait to see how he uses that gay eye on Tom hardy and Nick Hoult and all their shirtless strapping S&M friends.) 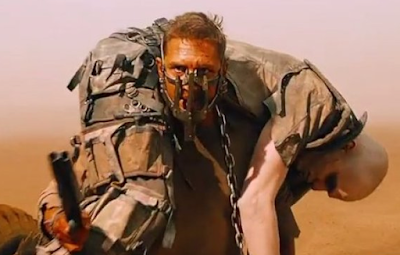 Anyway as for Mad Max every time I watch this, the original 1979 movie, I'm shocked at how far into the movie this scene is - this happens at nearly an hour and fifteen minutes in, when there's less than twenty more minutes to go! Max is allowed to have a happy home life for a long time, and his wife Jessie (Joanne Samuel) is an actual character.

That's just me mixing this movie up with the later ones which get bigger and cartoonier as they go along, and Max turns into more of an action icon than a human being. But I do think it's interesting to consider alongside the word that Fury Road is being called "feminist" -- Jessie is ultimately a victim in this movie, but she's actually a richer character than I think she's given credit for, too. I don't feel as if George Miller is atoning for past sins or anything now, is my point. It's just a progression; the seeds were always there.