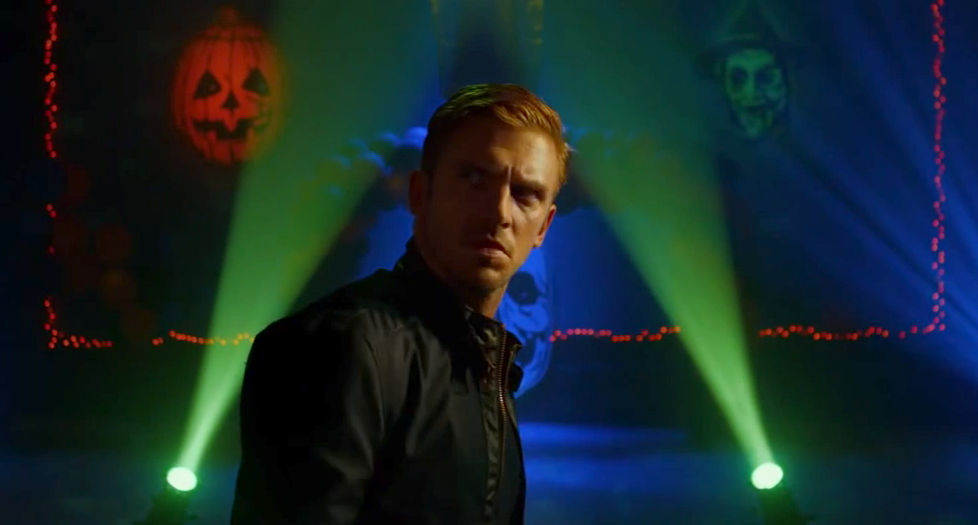 I was at the pleasantly perfect age when all those Fatal Attraction rip-offs came out - stuff like The Hand That Rocks the Cradle, The Crush, Pacific Heights, Fear with Marky Mark a'fingering, so on and on. They were great fun for awhile. You name it, Hollywood could find a way to make it from Hell. The Neighbor From Hell! The Nanny From Hell! The Ice Cream Truck Driver From Hell! And it's pretty clear that You're Next director Adam Wingard enjoyed those movies too because his new flick The Guest took me right back. (I suppose it's also got The Hitcher on its mind - would The Hitcher get filed alongside those previous titles?)

Anyway save the slickly synth 80s soundtrack (I really dug the score by Steve Moore) we need to step back to the forementioned The Crush, the terrible 1993 "Alicia Silverstone torments a super-cute Cary Elwes" flick (and by terrible I obviously mean hugely entertaining) because that's the one that The Guest kept making me think of. Just flip the sides and age the good bad girl ever-so-slightly out of Lolita-territory and ta-dah, insta-fun.

Fun is the operative word - Wingard was very clearly having a hoot making this, and so should you watching it. When Dan Stevens sidles out of a steamy bathroom to a dripping bo-hunk beat, please giggle along, the camera and every single person in front and behind it is begging you to. Camp riffing aside, it's genuinely heart-pounding at times - a nasty streak comes scratching out at ya now and again keeping the whole thing off-balance, in a good way. Dan Stevens, who couldn't die quick enough for me on Downton Abbey, is all kinds of outta-nowhere entertaining - I guess Maggie Smith blew some faerie dust in his eyes as he headed out the door, because he's some kind of surprise magic here. Cousin Matthew I hardly knew ya!

My favourite bit of exploitation was the beer keg scene.

Hotness abounds! Hard to reconciliate his current look/demeanor from the gentile but tubby Cousin Matthew.

Saw a bar brawl clip online and it's really uncanny how he sounds like Tom Cruise.

Agreed with the beer keg scene, Glenn, that was the best 80's shot I've seen in a long time.

Dan is looking SO buff in this film, but in real life he's very skinny!

#UGH I hate it when actors have to get big for roles, why can't they be like that in their day to day life? Is it much to ask?