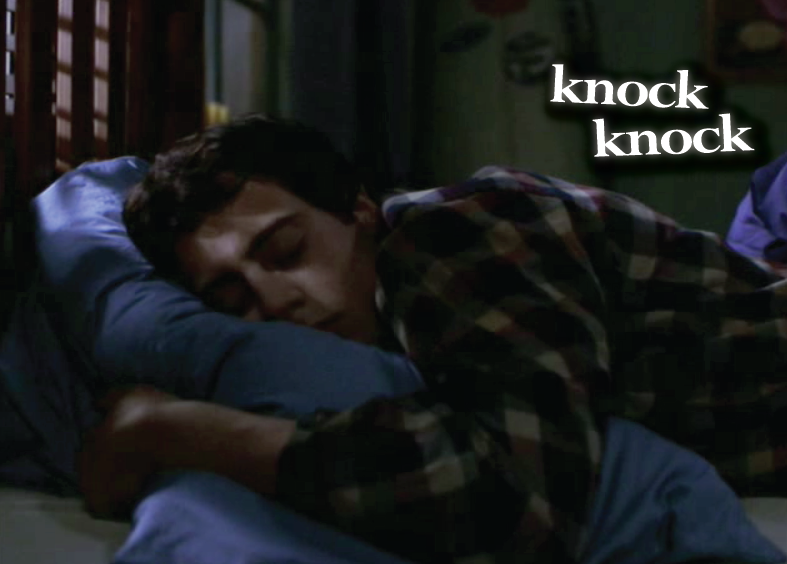 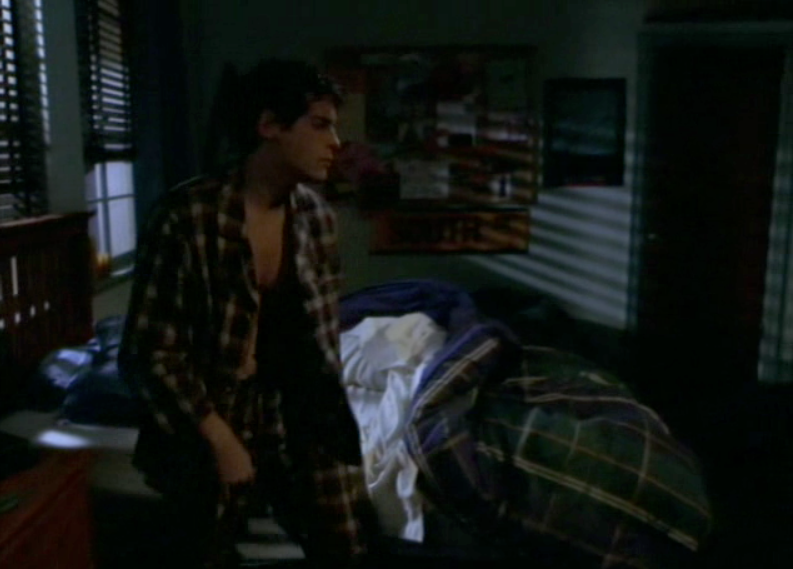 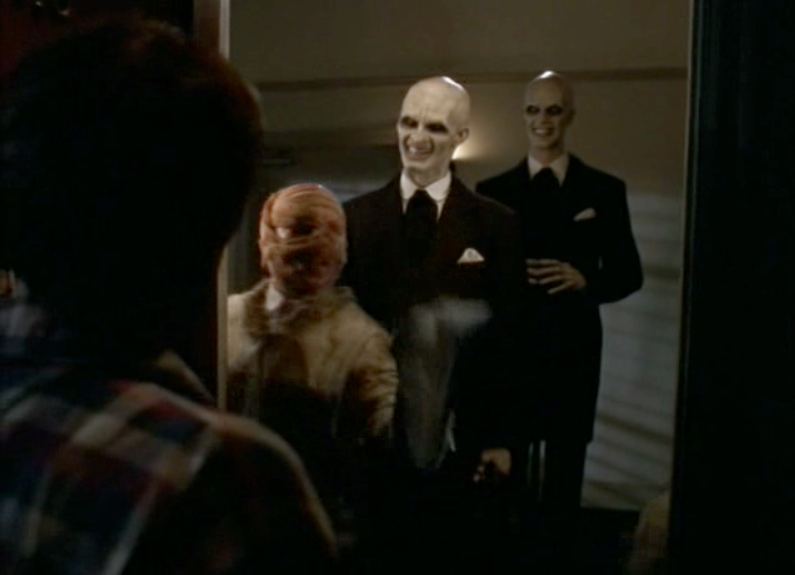 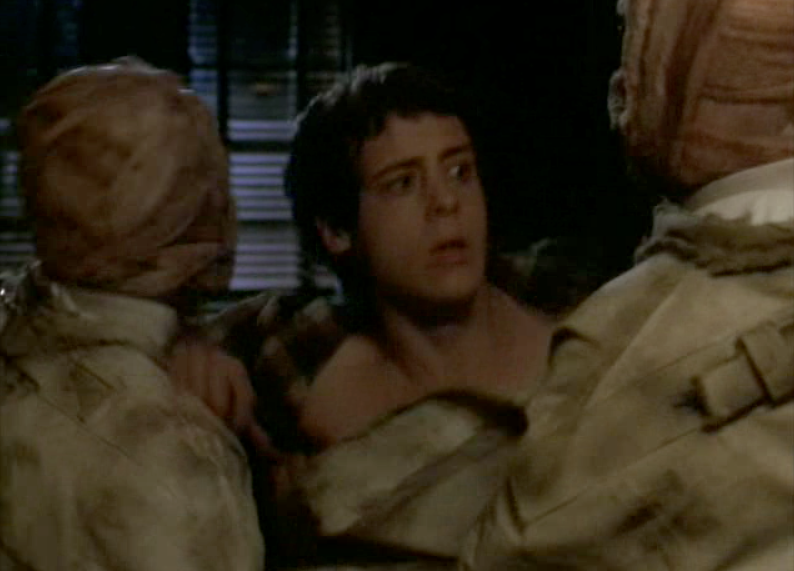 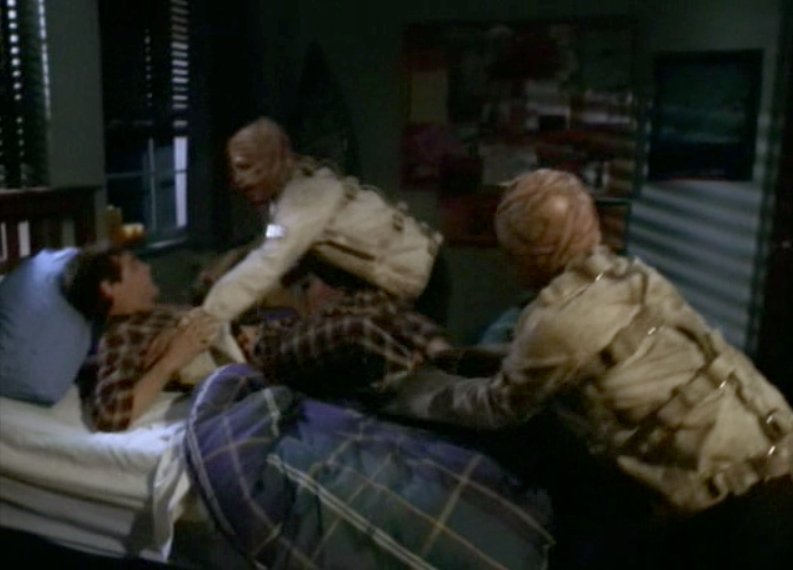 "Can't even shout, can't even cry
The Gentlemen are coming by
Looking in windows, knocking on doors
They need to take seven and they might take yours
Can't call to mom, can't say a word
You're gonna die screaming but you won't be heard." 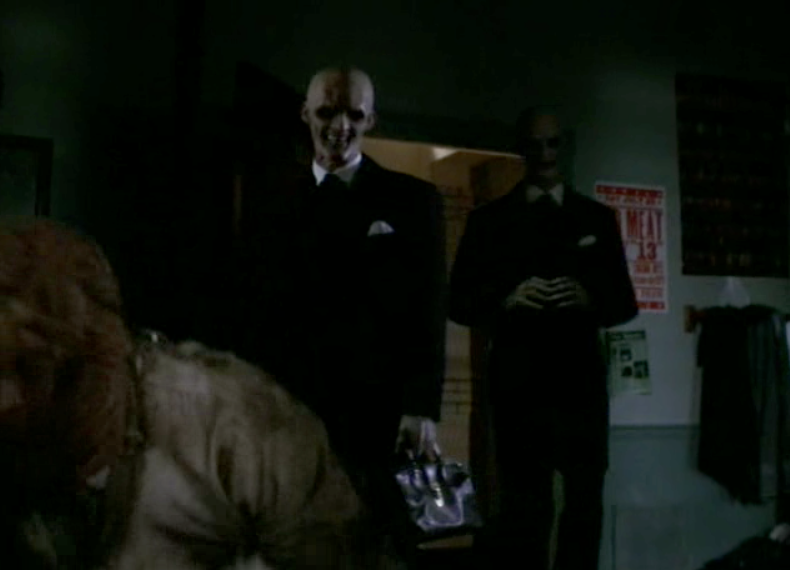 A pause before we get to the rest of this most horrific, most wonderful Way Not To Die (cannot believe I've never done this scene before!) - Joss Whedon's Buffy the Vampire Slayer debuted on the WB (that was a television network once upon a time, kiddies) on March 10th, 1997 at 9pm - that's 17 years ago this upcoming Monday. Seventeen years!!! As I've said before I didn't start regularly watching the show until the 5th season and had to backtrack to see everything from the start; I probably saw "Hush" out of order though since everybody's always (correctly) pushing "Hush" as the episode you use to convince non-believers that Buffy is the bomb. Anyway that's why we're finally getting around to this scene. Happy 17, Buffy! And speaking of getting to it, let's get to it! We don't want to keep The Gentlemen waiting. They have places to be. Hit the jump... 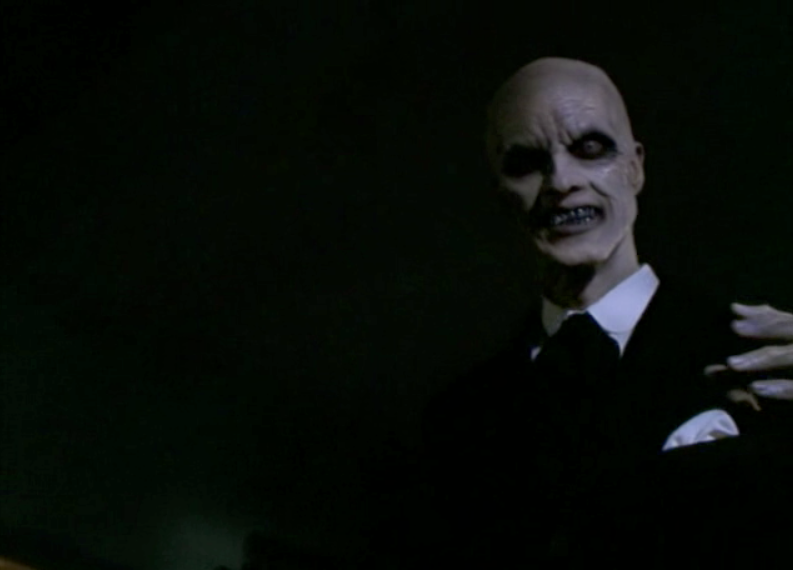 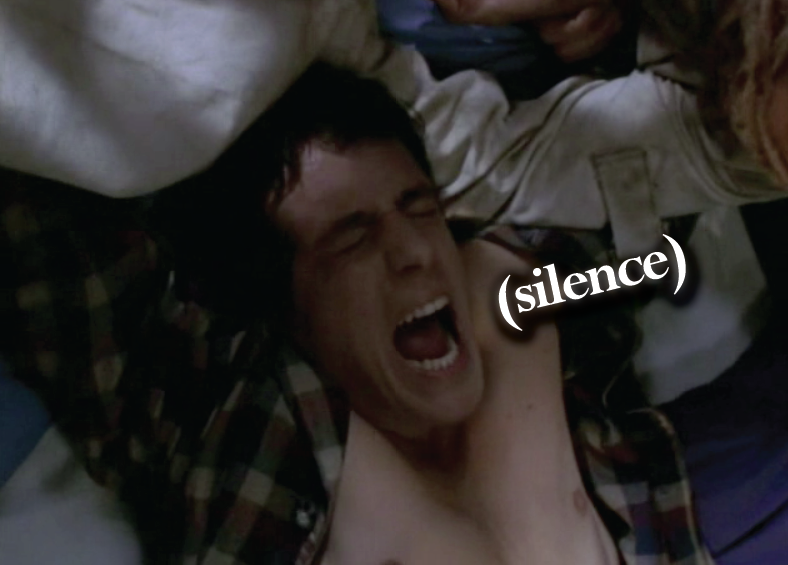 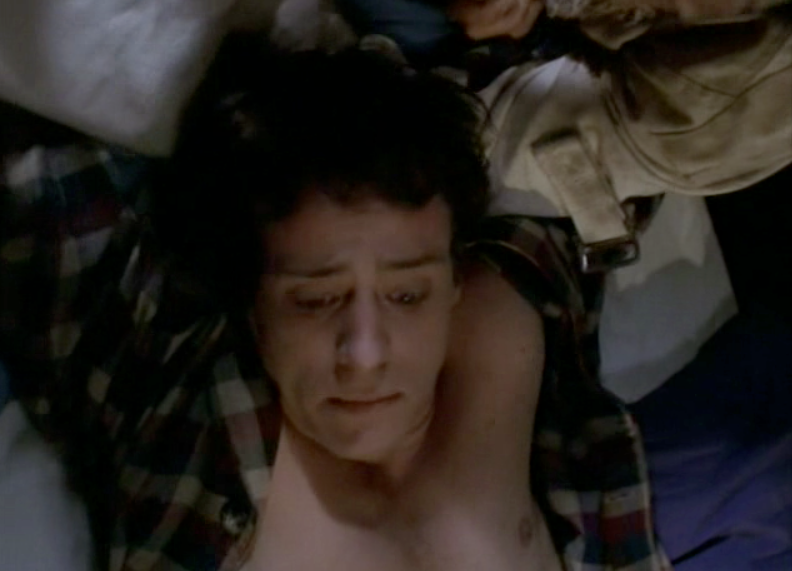 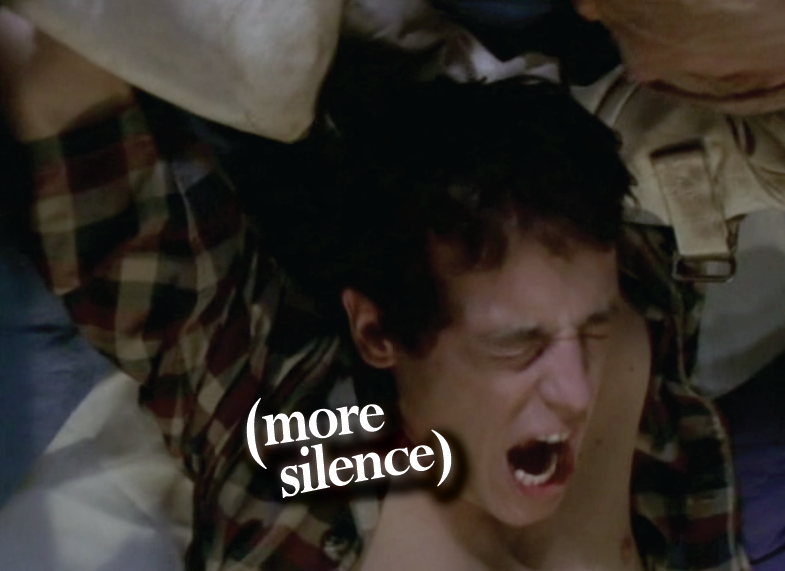 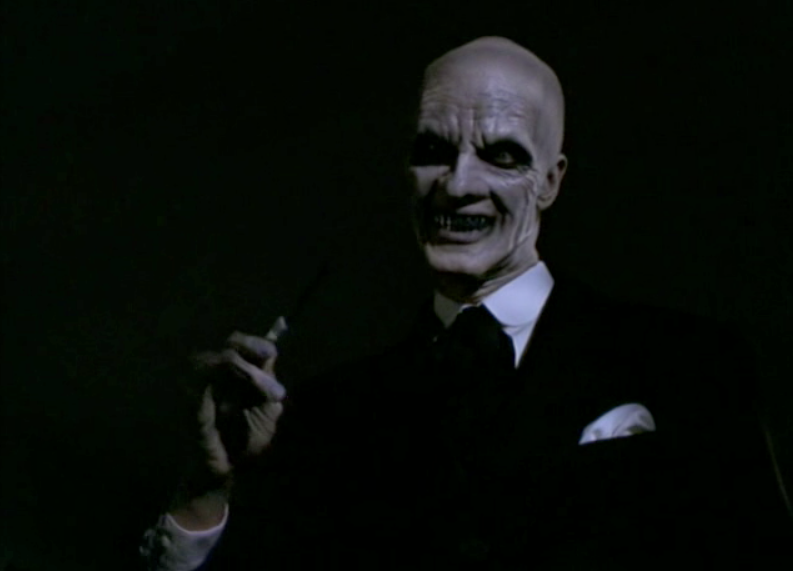 Boom, cut to black, and the next thing we see... 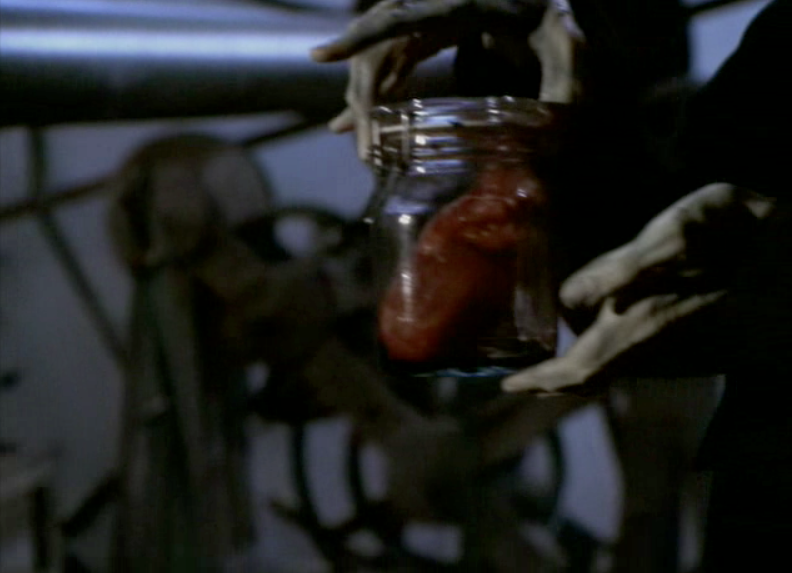 Oh dear, I don't think they were just slicing off a hangnail for him, were they? I know it's been said a million times but "Hush" is just an astonishing thing, isn't it? From top to bottom, this is a television show that's wrapped its legs full around its stride and ridden it hard unto the bountiful lands of total endless awesomeness. Just dissecting (heh) this sequence shot to shot to shot for this post, absolutely everything is coming together - the direction, the the lighting, the make-up, the performances...

I've said it before and no doubt I'll say it again but bless you, Doug Jones, you magnificent weirdo, I adore you. Check out that link if you're unfamiliar with Jones - on top of playing the Lead Gentleman here he's also brought to life most of Guillermo Del Toro's most memorable monsters; looking at IMDb I'm super-excited to see his name listed in the credits for Guillermo's upcoming Crimson Peak, and he's going to be on GDT's vampire show The Strain as well - oh what wonderful horrors await us??? 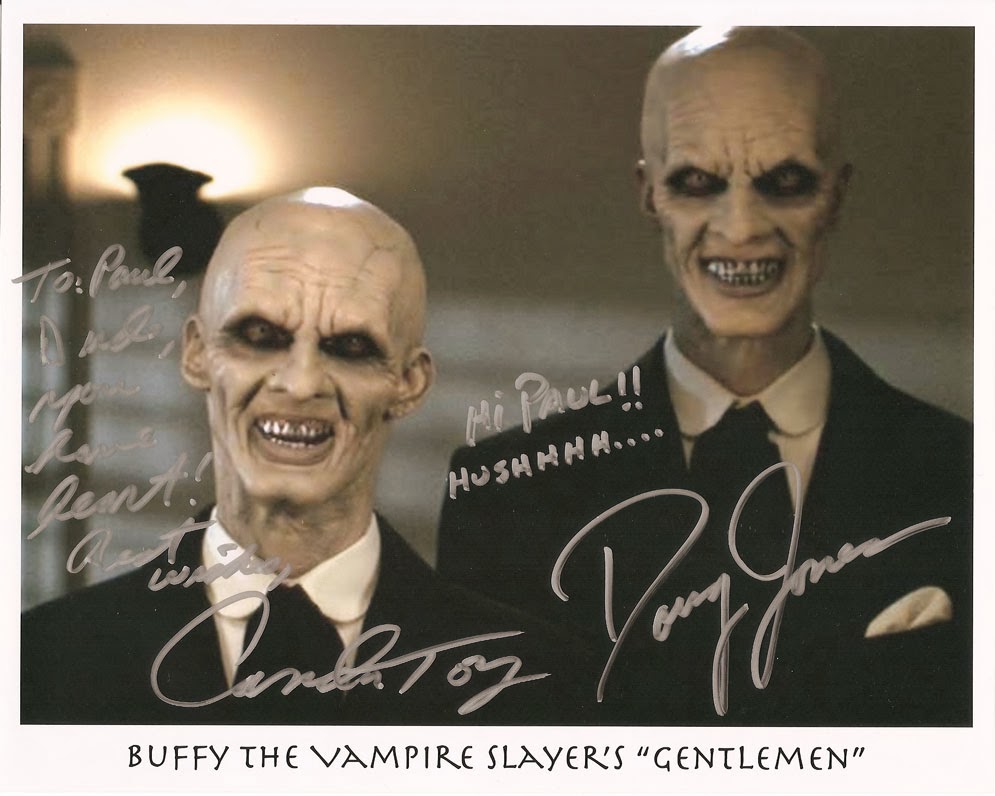 (Camden Toy is the other main Gentleman; he also played the so-called "Übervamp" in the show's final season.) Anyway obviously one of the things that's so effective about this scene in particular is the rape thing. This is a weird leering rapey scene! The Gentlemen and their terrifying henchmen are all male  (or you know approximately male-shaped), they burst into this this cute Freshman boy's room at night, throw him on his bed and hold him there, struggling to and fro, as the camera pans slowly down his exposed torso... Buffy dealt with rape a lot (like that controversial time that, uh, Buffy got raped by Spike) but I can't think of a scene where it was quite so... well, terrifyingly lascivious. 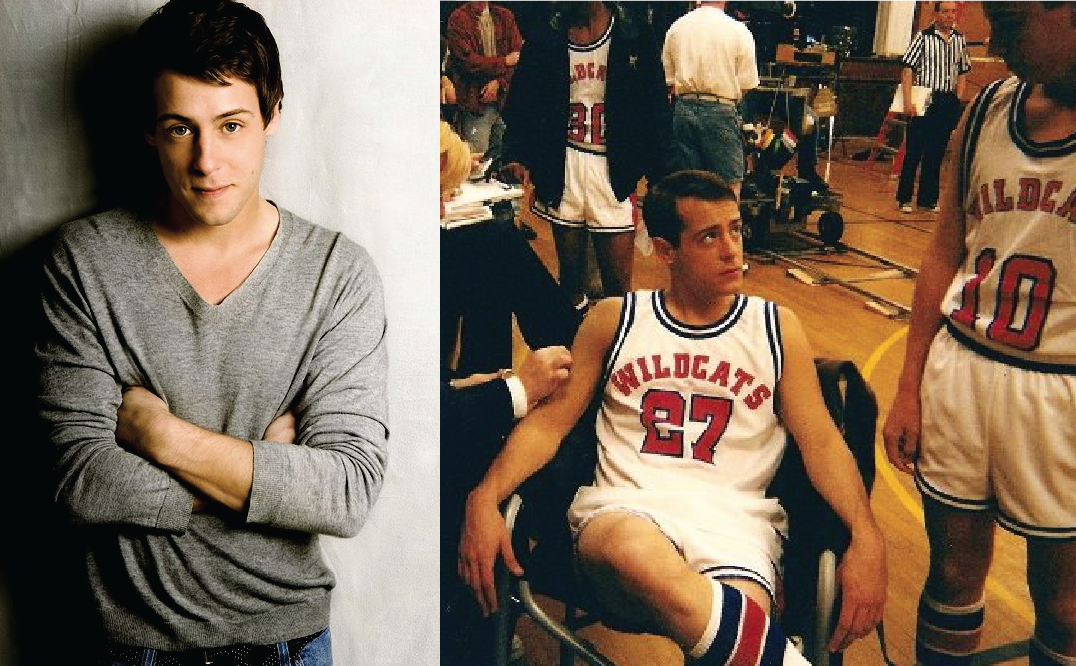 (Those are a couple pictures of Wayne Sable, the actor on the receiving end of the Gentlemen's nocturnal attentions; he doesn't have a lot of credits listed on IMDb but it must be something to at least have this one immortal moment on your resume.) I'm not the first person to wager that Joss has spent at least some of his time working out some same-sex feelings with his work, and this scene ranks way up there in the pantheon of That Going On, I'd say.

Ohhh man! The Gentlemen gave me legit nightmares for days.

Hush is a good ep, but I would recommend either The Pack (season 1) or I Only Have Eyes for You (season 2) to someone if they wanted to watch an episode that would typify the series. I have turned on more than one person to this show.


If you are looking for laser tattoo removal gurgaon than please contact us.

Can you imagine how different this episode would have been just a few years later with text messaging? True, cell phones never really made it to Sunnydale.

The Pretentious Know it All said...

Here's hoping the series has a good birthday. Better than what happened to Buffy herself when she turned 17...

Most frightening TV episode EVER! It was years before I could watch it again because I was so spooked the first time. I LOVE it.