Arch That Back Dom 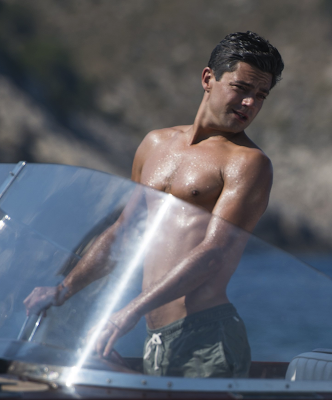 Well well, it took them long enough to release a picture of Dominic Cooper with his top off for that Ian Fleming bio-pic, didn't it? At least I think it's from that movie - the source isn't all that specific, but this shot's mixed in amongst a grouping of shots from the film so I'm assuming it's from that. Either way, whatever way, shirtless Dom holla. (And make sure to click on it - it embiggens a whole bunch.) And similarly in terms of vagueness I could've sworn I'd already posted the trailer for it but looking back I see no, not a proper one, just this thing, so here's the proper trailer which I guess just got online this week. The film airs in the UK on January 29th.
.
.
Who? Jason Adams When? 2:24 PM

"...that Ian Fleming bio-pic" is called Flemming: The Man Who Would Be Bond and is actually a mini-series. Cooper is slated to appear in at least 4 episodes. It premieres HERE on BBC America on the 29th. They just showed a commercial for it on BBC America! I'm looking forward to it.

What a body Dominic has especially that perfect ass! I don't know if we'll ever get another work from him like 'The Devil'd Double' which was the most brilliantly gratuitous show of male skin like ever! I'm looking forward to this!

No idea on a UK date yet.