And Eve Was Weaksauce, Say It 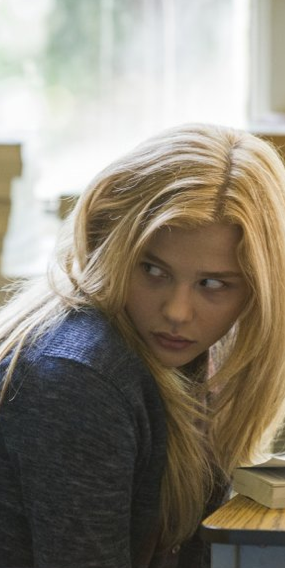 If I'd have known that 2014 was going to ring in with me being nice to my nemesis in my mind only Chloe Moretz on not one but two occasions, would I have wanted to ring in the New Year at all? Or would I have found this new strange world too discomfiting, too foreign - would I have built myself a nest outside of time and space and rotted there, happily content with the way we were? It's a question wearing a riddle's sloppy leftovers, I guess. We'll just never know! Time waits for no man, especially one who can hardly get himself off the floor for days at a time. So here we are, and it's the future, and I have a nice thing to say about Chloe Moretz. (A second one, after I admitted a hesitant fondness for the Kick Ass sequel last week.) And not just Chloe Moretz, but Chloe Moretz in the remake of Carrie, a film I was dreading with the force of Vesuvius.
Oh don't mistake me - the film is shit. Just terrible pointless junk. Kimberly Pierce should certainly be embarrassed - she managed to sap nearly everything interesting about DePalma's film, from its psychotic visual style to its lurching melodramatic pubescent opera, and genericize the life right out of it. The couple liberties that she takes - the You-Tubing, the inexplicable ending - are half-hearted and not well thought out; just kinda crammed in there, not gelling thematically in the slightest.
.
There's also a really weird funneling of responsibility over to the male characters - the girls all feel much less powerful and much more enthralled by the will of the menfolk. This version's Billy (played by the admittedly dreamy Alex Russell rocking a bad boy black tank top) has much more power over this Chris than Travolta ever did over Nancy Allen. Never has a manipulative beej been so missed! And the impetus for Carrie's ultimate prom freak-fest somehow here comes off as much more about Tommy's death than it ought to - in the original Carrie doesn't even seem to notice Tommy; it's personal, it's hers, this moment. Nothing matters - all of her fears realized swallow her like a lightning storm, and she is gone like zap. The remake cheapens it with goo and sentiment - it's all about a boy now.

But back to the good thing I wanted to say about Chloe! It took me a minute, but we're there now. Well okay wait we're almost there, hold on - first things, I still think she was horribly miscast in the role, and the worst qualities of her inappropriateness for it are on display for a good chunk of the film. That meek head-down pout thing she keeps doing is the sort of fantastically annoying display I expected from her, and she gives that crap in spades. But here, finally, the good - once Carrie does have her freak out, Chloe is actually really scary. The physicality she unleashes - that bizarre twisting body like a full-scale realization of Tom Cruise managing a touch-screen in Minority Report meets an epileptic fit, is seriously creepy.
.
Chloe's strengths, as much as I'm willing to admit them (and hey, I said I would, so let's) are of confidence - of full bodied in-your-face blowsy 'tude. It's why everybody went nuts for her in Kick Ass back in the day, even though I thought she was just Too Much - she needs to do some big campy comedy sort of thing, I think. She was very funny of 30 Rock. Anyway in the final act of Carrie where it's all blood-spattered Chloe zipping her hands around and driving people's faces through windshields, she had me actively retreating from the screen, and in the intended way for a change. There was power and an enthusiastic violence in those moments that wrung something kind of unexpected from the material, something the rest of the movie's too scattered or scared to go for. For example I refer you to the fact that I have absolutely nothing to say about Julianne Moore's performance, which is like saying I have absolutely nothing to say about words. It doesn't make any sense.
.
Who? Jason Adams When? 5:15 PM
Labels: Alex Russell, brian depalma, horror, Julianne Moore, reviews, Stephen King

I'm impressed. I've always been a Chloe fan and never understood why you hated her so much. Evolution is a good thing. :)