I watched a ton of movies over the holiday (Does ten count as a ton? Maybe if you count all the reels?) and so here's an attempt to get thoughts on a few (namely four) out quick-like before they fade. These are all 2013 movies, too. Slowly but surely checking off the year - maybe we'll get our awards out before April for once? (Hahahahahahaha yeah right.)

Before Midnight -- It's official! You can all hate my guts now, because I'm officially just not that into the Before movies. That's three down, and no love to go around from me. I've tried, man. I love the idea of them, and I'll never begrudge the existence of something so in love with dialogue and romance and endless intricacies of personality, not to mention the fascination, as the series has wound along, with the passage of time and how we change and especially don't change as people. In theory that's all smashing! Problem is - and here's where I know some of you will take this as personal injury, and I apologize; I totally know what it's like to be devoted to a fictional character - I just don't like Jesse and Celine. I don't find them very interesting, and I just don't want to spend all this time with them.

I know that "liking" characters ought not be a prerequisite in storytelling, and bless Richard Linklater & Co for full on exploring the character's foibles and cruelties and so forth. In theory. I'm sure that they are all aware, to a certain extent, of these people as difficult, and it is, to a certain extent, intentional. I just never really made it past that extent, and around to the place where I'm supposed to give a shit about much of anything they find so interesting. I've gone out of my way in life to actively avoid people who cannot stop talking about themselves and their inanities for five minutes, ya know? On and on and on they go. I feel like these movies should end in a murder-suicide pact, or the two of them choking to death on their own swollen tongues. 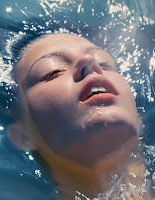 Blue is the Warmest Color -- I have never touched a stark naked lady in my entire life and I can't even tell you how many memories Blue is the Warmest Color stirred up all the same. I was right back there to being eighteen years old - meeting my first boyfriend, our first kiss in the kitchen of his friend's house, fooling around on the living-room floor of his own apartment, breaking up, hooking up again months later and how horrible that was, meeting him months later with his new boyfriend, and on, and on. Adèle Exarchopoulos, with her big open awkward face - the camera just lives right there on top of that face for ages and ages; sobbing and huffing and puffing, flirting and snarling and smacking her lips. I can't imagine how she allowed us in to the places she allows us into. She is an absolute marvel.

Lemme tell you what though - a three-minute sex scene that's doing zilch for me titillation-wise (I am such a Kinsey 6) sure does feel like it's an hour long though. At the time I was watching the sex stuff it did feel incongruous - for a movie that had been so keyed into the awkwardness of first experience, Adele's an astonishing sex pro right off the bat. No fumbling nervously for her! Wham bam best sex ever! I totally get why some people have expressed an, uh, ambivalence about this being directed from a straight male's perspective. But a scene late in the film sorted that out for me a little bit - when Adele and Emma meet up again in the restaurant and they talk about how their sex together hasn't been topped with anyone else, I think we're supposed to take those initial "wham bam best sex ever" moments as an expression of Adele's having found the place where she belongs. We got that awkward sex scene between Adele and that school-boy earlier to underline that - there it was not right; with Emma, all is right. Super duper right. Things, if you will, slide into place. And you know, I'm just not gonna argue with a movie that's intent on expressing same-sex love and sex as the wham bam best thing ever. I know there was fumbling and awkwardness there on the living-room floor with my first boyfriend, but man, wow.

Wadjda -- I was pretty worried when I read Wadjda's plot summary (Saudi Arabian girl dreams of a green bicycle!) that I was in for some soul-affirming treacle that was getting un-due praise because of its admittedly very impressive behind-the-scenes story - it's the very first movie made in Saudi Arabia, and by a woman no less! She had to direct from inside a van so the Saudi men-folk didn't freak out about a lady doing a man's job! That's craziness, and it's worthy of attention, but is the movie any good, or is it just something harmless that people can feel good about supporting? Well I won't totally negate that argument, it's a little bit harmless, but it's not nearly as treacly as I was worrying, and really very involving in the end. And Waad Mohammed has wonderful presence on screen. And yeah sure Wadjda is constructed to be an incorrigibly lovable urchin, but so what - if I can forgive Blue is the Warmest Color for all that gratuitous ass-smacking I can forgive Wadjda for giving Saudi girls a relatively harmlessly defiant little super-heroine to mark up their sneakers with. The film actually pushes slightly harder than I anticipated, and honestly I'm glad my feeling it might go total dark (all of that rock throwing kept the specter of stoning humming at its edges) was left unrealized.

White House Down - This really is one of the absolute stupidest movies I have seen in a long while. Just total and utter nonsense, so much so that when I tried to explain a little bit of the plot to my boyfriend when he came into the room mid-movie I actually burst into laughter and threw my hands in the air. Does that mean it's dumb fun? Oh, occasionally. Channing Tatum is too darn charming for it not to have some appeal, and I don't just mean him in a wife-beater. But so is Bruce Willis super charming, and WHD keeps thinking it can pretend its Die Hard since it's got a charming leading man trapped in an enclosed space while wearing a wife-beater, and that's where the real stupidity comes in. Die Hard is so smart in its simplicity, while WHD is defiantly Emmerichian in its devotion to piling and piling and piling on un-needed excess. There are so many saw-it-from-a-mile-away bad guy reveals I really thought the movie might end with Channing ripping a mask off of Maggie Gyllenhaal and finding the guy who runs the haunted amusement park under there.
.
Who? Jason Adams When? 5:48 PM
Labels: channing tatum, reviews

The way you described Before Midnight is how I felt about Frances Ha. In theory it was a fine movie but Ive gone out of my way to avoid people like that. So to spend an hour and a half with people that remind me of all the assholes Ive known and met in my life was complete torture. Although Greta Gerwig was kind of charming.. sometimes.

Way to take my "I totally know what it's like to be devoted to a fictional character" and throw it back in my face, anon!!! ;)

I feel like the Before Sunrise series is like "The Notebook" for the thinking girl. Span it over three movies, make it all about talking about things, show how their relationship changes through the decades of time, and BAM! I'm in love. I don't know if either character is evolved as an individual to like them, but I like them as a couple. I like how we see them in a movie-romantic meet cute in Vienna, in a more dramatic "what the hell happened?" moment in Paris, and in a final, harrowing "ack I think I might fucking hate you" weekend in Greece. Are relationships worth it? Are they meant for each other? Or was it all a huge horrible fucking mistake? GAH! I ate it up.

nice writeups! i really did admire and love 'wadjda.' 'before midnight' hit me unexpectedly emotionally at the end. i like the performances in 'blue' quite a bit but found the film flat and overlong. 'white house down' was a bore and not enough shirtless channing.

I thought I was the only person who wasn't able to connect to the Before Sunrise/Sunset/Midnight series. It's the sort of movie that I gravitate toward, but all of them just left me feeling cold and detached. I tried.