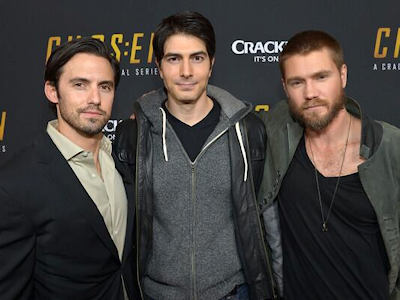 Have you guys heard of this series called Chosen? Or rather, excuse me, Ch:os:en...? Punctuation at red alert! Anyway it's an exclusive to Crackle, which I totally downloaded on my iPad one time but have never opened before. It's like a free movie streaming service, right? Anyway that's not why we're here - we're here because Chosen (I am not typing that godforsaken punctuation again) apparently stars Milo Ventimiglia, Brandon Routh and Chad Michael Murray. And in related news, Chad Michael Murray apparently still exists. Wait wait step back, he has a beard now, I have to set aside my snark. Beards kill snark dontcha know.
.

.
Anyway part two I actually saw that there trailer for the new season of the show (yes, there's already been one season, I guess) the other day but it didn't have any of the guys making out so I forgot about it, until just now, seeing that picture of them together. And it's been awhile since we've done a Do Dump or Marry, so let's! 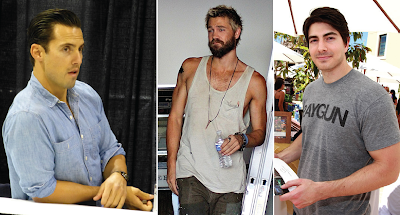 Alright judge all you want but that homeless "suck your dick for a large order of french fries" look on CMM is totally working for me. I smell romance! Romance, and patchouli. Alright so you know the drill, hit the comments, which would you do, which would you dump, and which would you marry?
.
Who? Jason Adams When? 2:29 PM

Oh, man, this is like the douchebag fuck me trifecta. I would do them all, you know I would. The problem is that I wouldn't want to marry...any of them. They're not the type you want to see in your bed everyday. They're the guys you feel better for having blown under the table at a boring anniversary party thrown by your friends who can't stop talking about how perfect their relationship is in front of everyone, but hardly spend a moment together without fighting. You take these guys because they're hot and total douchebags everyone will talk about. You know they'd fuck the bride's maid and best man if you left them alone for five minutes, but that's why you brought them.

It's a real dilemma. But, on this instance, I am going to have to go with personality, because these are some fine-ass bitches.

Marry Milo, you know he's a wild one and getting to be with him more than once is appealing. Do CMM, he's going to either brag about you or rag on you to his friends, but you'll be doing the same between flea dips to get rid of the beard bugs. Dump Brandon, because the only difference between him and a cutout of him is the cutout's been airbrushed to make it look like it's alive.

I would do all three to each of them. Fuck them all at once, marry them all in a ceremony that would make Rick Santorum's head explode, and then I would dump all of them one by one. Brandon would be last, because he is the dreamiest of the three. I'm sorry das, I totally disagree with you. CMM is a douche who stayed on a show waaaay too long. At least Routh tries different stuff and just fails.

Oh, man. Damn that beard. CMM was going to be the easiest Dump in MNPP history, but now he is firmly the Do. I guess I gotta throw Milo under the bus and live happily ever after with Superman.

Dump CMM because he looks like my HS bully, perfect handsome douchebag, do Milo because who wouldn't and marry Brandon, he looks adorable.