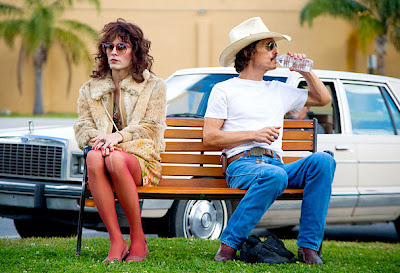 If I were able to look at Dallas Buyers Club on its own, devoid of so so much outside context, I probably would have had an easier time swallowing down its story of the AIDS epidemic filtered through the eyes of an aggressively heterosexual prick who sees the light only from the lowest low place, with a little help from the magical transsexual who has to die (if that is a spoiler then you've never seen a movie) so that he can become the big man with the wheezing heart of gold. Consider it Schindler's AIDS. Matthew McConoughey works very hard, body and soul (mostly body), and is pretty much very good. There's a heart-breaker of a scene late on with Jennifer Garner where his machismo slips and you're just smacked upside the face with this man's desperation for a return to what was, to a semblance of normalcy in a sea of sickness and death.

It's just that though - the film's beating heart sitting over there on a absent sense of what was normalcy, that gives me the willies about the movie though; all the ho ho ain't he something's, the disastrously misplaced cue-the-laughtrack rom-com rumblings dropped in the middle (I love you so much Jennifer Garner, but get the hell out of this movie) like sugar sprinkled on bed sores. Here we are twenty-odd years on from Philadelphia and Hollywood's still shaking in its boots at gay stuff. Yeah sure Ron Woodroff's a real person and some version of all of this really happened - it's just that this is the only story seems anybody will throw any money at to get made. The semi-redemption of this callous motherfucker can only really feel like an affront when there are a million stories of my brothers and sisters rotting in their graves.

Problem is, and problem remained once the credits rolled - I just really don't give a shit about your story anymore, Ron Woodroff. I've had it with your story. The plight of the poor poor man who cannot put his penis in a vagina any more, the movie.  And I resent the movie for trying to make me. I mean it's a mostly finely made movie (with a few tonal issues). Perhaps this movie is just for somebody else. That's fine. Somebody who needed to think to themselves, oh gosh AIDS sure sucked, didn't it? Even for a poontang-addicted asshole like me! Well ship this movie to Bumfucke and leave me be - I don't wanna know those people, and I don't want to sit beside them and hold their hands through this difficult time of theirs. Fuck their difficult times.
.
Who? Jason Adams When? 5:47 PM

love this review. You've said a lot of what I felt while watching it. However what I carried with me in the end was Leto's tender, moving, natural performance.His scene with Garner in the hospital asking about his neckline is a thing of beauty. And o is his scene with his dad. He rises above the cliche of the character.

I don't know if I'll see this movie but I've been hearing a lot about it and I read an on-line interview with Jared Leto and some say he might get an Oscar nomination. A few weeks ago I watched Behind The Candelabra and I didn't get all of the fuss about the sex scenes. The only skin they showed while in bed was above the waist. I thought after Brokeback Mountain things would change.

I was a little more generous with my review but I dig your perspective.

Thanks fot this review. Those you mention are some of my (preemptive) issues with the movie, and why I won't go see it. The GLBT has for many years carried the burden of AIDS quite bravely I must say, buy when it comes to make an inspirational(?) story, they choose a homophobe whose reward seems to be having a movie made about himself. It's like The Iron Lady all over again. Sorry, Hollywood, I didn't get the memo when someone decided that we've had enough heroes and antiheroes, so now we go a step further and make movie heroes out of despicable people. No, thank you. Why not making a movie about one of those homophobes that are around us right now, who having all the information won't get tested for AIDS and keep infecting other people?

And also I'm getting more and more tired of the star vehicles tailor made for the said star, let that be Meryl Streep or Matthew McConaughey, to win awards or prestige. This movie's reason of existing is for McCounaghey to complete his star (re)making process as much as The Iron Lady's reason for existence was to make Streep a three time Oscar winner. I don't know if that is the right criteria to make movies, it's not my criteria to go see them.