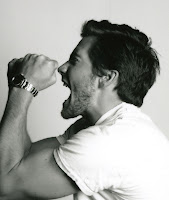 --- Gyllen All - Jake's making the talk show rounds this week for Prisoners, and here he is on Kelly & Michael (typing the name of that show feels so wrong sans any Regis) where they apparently get him to say whether he sleeps in the nude or not. Anybody want to watch the clip and tell me what he says? I don't think I can sit through any Kelly & Michael, even with Jake Gyllenhaal possibly talking about being naked. Bonus: Jake's on Inside the Actor's Studio tonight!

--- DC Funnies - The creator of the comic-strip Doonesbury is making a comedy series for Amazon (who are apparently getting in on the Netflix type instant entertainment business) about a group of US senators who become roommates, and Amy Sedaris and Wanda Sykes will be on it. I'm sold already.

--- Ruff Ruff - Finally a little bit o' detail on that animated dog movie that Noah Baumbauch and Greta Gerwig are both on the record as an upcoming project of theirs, much to the world's brow-arched bafflement - it's apparently an adaptation of a book from a series called Flawed Dogs by someone who goes by the name Berkeley Breathed. Mkay. It's about dog show dogs on an adventure.

--- Downed Man - Angelina Jolie hasn't had much success with the directing thing but kudos to her for keeping on keeping on; we need more women directors, and she's certainly got the pull to get things done. Next she's making a WWII pic about a former Olympian turned solider who crashes in the ocean and survives being at sea for two months, only to wash up behind enemy lines and become a POW. Skins star Jack O'Connell (seen to the right) has already got the lead; Garret Hedlund just joined the cast as the leader of the prisoners at the camp.

--- Red Writer - Only two weeks of Breaking Bad left (didja hear the final two eps are 75 minutes long each?) so we turn to what Walter's up to next - Bryan Cranston is going to star in a bio-pic about screenwriter Dalton Trumbo (that's a name and a half; straight out of a Raymond Carver story) who was blacklisted because he refused to cooperate with the Communist witch trials of the Fifties. He went to Mexico and churned out scripts that got made anyway, only under a different dude's name. 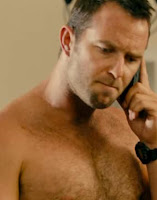 --- Times A Charm - An upcoming Aussie thriller called Kill Me Three Times has gathered together an interesting cast - Simon Pegg and Theresa Palmer are enough to sell me on their own, but it's also got Sullivan Stapleton (he was one of the brothers in Animal Kingdom, and he's in the upcoming 300 sequel, and as you can see to the left, he's hot) and also the Other Hemsworth, the one called Luke. (thanks Glenn)

--- Northern Exposure - Hey remember how there was some kind of film festival in Canada last week? Well if you haven't totally moved on you ought to check out Amir's first of two recaps of his take on the fest over at The Film Experience; everything he has to say about the Oscars drowning out everything seems gosh-darn smart to me.

--- And finally, director David Ayer last made the much better than it had any right being End of Watch so we're paying attention to his next one, a WWII "trapped in a tank behind enemy lines" flick called Fury, which will star a bevy of attractive gentlemen like Brad Pitt, Logan Lerman, Shia LaBeouf, Michael Pena and Jon Bernthal. Anyway Ayer tweeted this photo of the cast yesterday, and I like it: 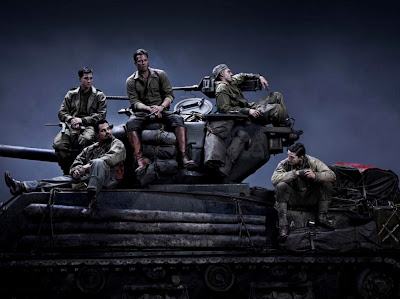 Jee Jay said...
This comment has been removed by the author.
1:06 PM

"Flawed Dogs by someone who goes by the name Berkeley Breathed"

Berkeley Breathed is the creator of the 'Bloom County' (aka 'Opus') comic strip which was one of the great strips of the 80s and 90s.

I guess I have maybe seen the title Bloom County before but yeah, that all pretty much entirely slipped by me.

I bit the bullet and watched the clip. Just for you, JA:

They played In or Out. His answers are:

Drive in Movies - In
Bow Ties - In
Dancing with the Stars - Out
Fantasy Football - Out
Real Football - In
PDAs - In
Twerking - Out
Slow Dancing - In
Pizza - In
Pedicures - Out
Sleeping in the buff - Depends on the situation, generally out, he likes it cold so it's preferable to have something on.

And now you know.

I am also shocked and saddened that you don't know who Berkley Breathed is! Old 'Bloom County' strips are so good. The Billy and the Boingers story arc still makes me giggle in retrospect.