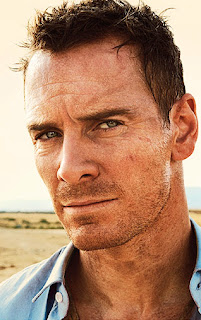 --- Likey Mikey - I love how The Playlist says here that one of the "pleasures to be had" from Ridley Scott's upcoming movie The Counselor, they assume, is "watching Michael Fassbender squirm." I am probably the one responsible for projecting all kind of filthys exual insinuations onto the word "squirm" there, but there we go, that's where I am. Anyway they've got new clips and character posters from the movie at that link, like that handsome (is there any other kind) shot of Mikey at left. 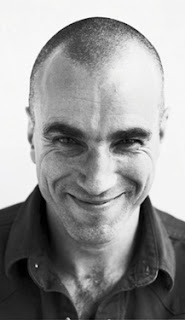 --- Fava Surprise - Hey did you know that Daniel Day-Lewis could have played Hannibal Lecter? That's what Derek Jacobi says in his book, where he says he was also up for the role. And while you go off and wonder what DDL's Lecter might have looked like, I'm going to do whatever I do when Derek Jacobi's name comes up... remember a naked Daniel Craig in Love is the Devil. Ahhh.

--- Final Frontier - 22 days until Gravity opens! And I still can't buy my tickets dammit. Come on Fandango, you're killing me. For now here's a big pile of new pics from the movie - if I smash my face against the computer screen it's almost like IMAX, except not at all.

--- Fantastic Flicks - This is no doubt today big news - JK Rowling is turning her book Fantastic Beasts and Where to Find Them, which is set in the world of Harry Potter, into a movie... presumably a series of movies. Jo's actually writing the screenplay. I liked FBAWTFT but it's pretty slight, but no doubt she's got the whole background mapped out - who am I to doubt the power of the Rowling?

--- No Fangs - The Dracula movie that Noted Homosexual Luke Evans is starring in opposite Dominic Cooper and Sarah Gadon has just been renamed from Dracula: Year One to Dracula Untold. Good grief that's a lousy name. And as excited as I am to see Dominic Cooper do anything, I am Dracula'd out, man. This doesn't bode well either for the TV series with Jonathan Rhys Meyers and Thomas Kretschmann, by the way.

--- New Sympathy - The Palestinian director of Paradise Now (which I have not seen) has come aboard the English-language remake of Park Chan-wook's Sympathy For Mr. Vengeance. I would say hat's an unexpected pick, right? I can't say anything since I haven't seen any of his movies, but it 's seemed like a fool's errand to me, remaking this one, maybe even more than Oldboy.

--- Twice Made - I really really wish that Jake Gyllenhaal's double movie Enemy were playing at the New York Film Festival, but it ain't, so I've gotta wait til lord knows when - I'm even more anxious now that Nat reviewed it from Toronto and made it sound like the sort of thing I adore. (Bonus shirtless Wes Bentley at link.)

--- Nice Unit - Joe Reid lists 2013's best and worst movie families in honor of that mafia movie with DeNiro and Michelle Pfeiffer coming out this weekend called The Family. There's never a bad occasion for a list! Especially one broad enough to include Leslie Mann's Ritalin pusher and Matthew Goode's shoe fetish.
.
Who? Jason Adams When? 10:43 AM