We Three Films Of Disorient Argh 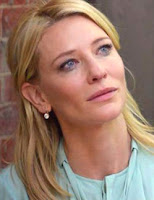 Blue Jasmine -- Yeah it's basically A Streetcar Named Madoff, but did you ever expect a Woody Allen movie to vibrate on the same wavelength as Requiem For a Dream? That's the note it - specifically Cate Blanchett's shaky, devastating performance - left on my palette in the end, and I liked it. There's a frisson at work that's more interesting than anything Woody's done in awhile, even if I don't think it coheres on a fundamental level like say something more basic and assured like Vicki Christina Barcelona did - Cate's performance is something all its own, splitting the seams of what might have been something entirely else, in somebody else's hands. That's not to say she's the whole of everything - I'm a little bit sad that Sally Hawkins isn't going to get the credit she deserves for balancing this stormy ship as well as she does with a performance that's matching Blanchett's while existing in that whole other movie as well. She's dancing backwards in high heels, while Cate just levels the world.

The Grandmaster -- As is often the case with Wong Kar-wai's movies I feel like there's a whole universe that he's riffing on that exists just a smidge outside of my grasp - think 2046, a puzzle that only comes into semi-clarity if you're a diehard Wong fanatic. Here it's the Ip Man mythology that's leaving me in the dust, of which all I know is the briefest of basics. Oh we get the life-story here, at least its basics - how this singular man wrapped a cultural expression of balletic violence around his pinkie and turned it upon the world - but its all done up in the pretty pretty packages of eye-popping set-pieces that feel as if they'd have meant a little bit more to me if I felt the weight of Ip Man as a Cultural Force more than my most basic recognition allows. I marvel at the movement, the color, and the planes of Tony and Ziyi's faces, while still managing to feel just a little bit left out. The train just keeps leaving the station.

The Call -- A perfectly ridiculous thriller for ninety-seven percent of its run-time - that is to say, perfectly ridiculously enjoyable, in the way you can get wrapped up in this kind of mindless trash and have a lot of fun with it. It was probably a total hoot to see this in the theater, and be the sort of person who yells curse words at the people acting stupid on-screen. It's mostly relentless enough that you can set aside all of your qualms and just toss yourself into the situation - director Brad Anderson knows his way around a quickening of your heart rate. But what an infuriatingly moronic and offensive ending it has, as stressed-out and split-ended as Halle's Sideshow Bob hair-do, going twenty-five thousand steps too far and flushing all of my dumb fun down the drain in the process.
.
Who? Jason Adams When? 5:37 PM

I agree with you about the grandmaster. It was beautiful look at but it felt like they cramming too much story into the movie.

Did you see the actual film The Grandmaster or the imported post-harvey scissorhands weinstein shitshow that is reportedly terrible?

I saw it via a Chinese DVD well before it was released here so def. the original version