To The Viscera Go The Spoils 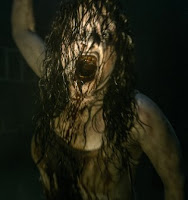 I've heard a lot about how Joss Whedon and Drew Goddard's Cabin in the Woods - my favorite horror movie of the last year! - razed the ground that something like a straight-forward Evil Dead remake would tread, and how foolish it would be for them to not go meta at this point in history, and I am so happy that this is, according to me, a bunch of malarkey. I have no desire for the world to become nothing but Cabin the Woods movies endlessly winking at me - unless you've got somebody as or more clever than Joss & Co this would get really tired really fast. Think about the free-fall slashers eventually took in a post-modern post-Scream world - think upon Busta Rhymes beating Michael Myers, and despair.

There's really no need to toss out the hideously deformed baby with the bathwater, and Fede Alvarez's Evil Dead shows there's still juice - and all matter of bodily fluid - in the genre, if you're willing to hike up your sleeves and go for it. And by "sleeves" I mean "all of the meat and viscera connecting your limbs to the bone" and by "hike them up" I mean slice through the meat and bone and make the theater quiver and shake with the sound of snapping and twisting and nerves being severed, and so on. The good stuff! 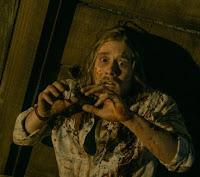 I know extreme gore's not everybody's cuppa and that's totally cool, if it were it might not still hold that special tickle slash thrill of the forbidden that it does - once your grandmother's grooving to Fulci where do we go from there? I find myself entirely capable of enjoying both the latest bloodless all-about-the- atmospherics ghost-story as well as the movies where you need those little windshield wipers on your glasses from all the splatter dousing the screen - they are different things and they bring different pleasures.

Evil Dead 2013 is mostly a deadly serious affair - if I hear another person say how they went in expecting the comic-horror-slapstick of the second Evil Dead movie in this here remake of the pretty-much-entirely-serious first Evil Dead movie I will cut something off, by the way - but even if nobody's doing Three Stooges routines with amputated hands it's still playing on a level of super-heightened super-hardcore fun, of its own kind, if you can vibe thereupon. Think of the wet thump of that hanging-on-by-a-thread arm slip-sliding down and smacking on the floor, and if you don't laugh out loud then you probably shouldn't be listening to what I have to say anyway.
.
Who? Jason Adams When? 3:21 PM