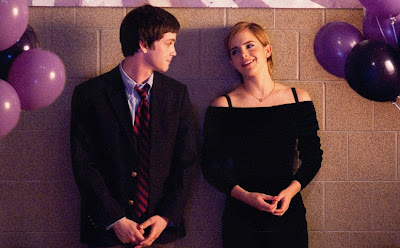 Alright if I don't just do this right now, wham bam, I might never do this. We'd be wham-less and bam-less! And that's no good. So let's do it. There are ten movies I watched over the holiday break that I haven't written anything about yet, opinion-wise. I am now going to attempt, totally off-the-cuff, to give you some thoughts upon them. Some of them are already getting vague in my memory. So... this should be fun...? Or nonsense. Either way it shall come to pass, I boom in my best Ian McKellen. Ahem. Here we go. 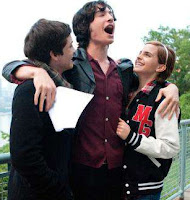 The Perks of Being a Wallflower - I sort of live tweeted this one; anyway I made it clear therein that I absolutely adored the film, and that's a feeling that only got stronger as it ever so sweetly rolled along. You watch a movie like this and it makes you realize how often movies don't seem to give a shit about their own characters, or have the characters therein not give a shit about each other, and how warmly rewarding it is to watch people seem to actually like each other once in awhile. It doesn't hurt that Logan Lerman and Emma Watson and Ezra Miller had some astonishingly genuine chemistry with each other. The entire movie worked for me - without being obnoxious about pushing the period stuff it brought me right back to the early 90s with a vengeance. A simple thing - how they couldn't figure out what that Bowie song was - felt so spot on and reminded me so specifically of how many songs remained these magical frustrating mysteries back before every answer was a quick google away. Little things like that ballooned outwards, and just wound me up into the film's concurrent specificity and universality. I didn't have friends like this, this wasn't my story, but it felt like it was anyway, you know? And everybody's good, but Logan Lerman is wonderful. Anyway I could watch this movie again tonight, and tomorrow night, and on. A total keeper and definitely my favorite of everything I'll be talking about here. 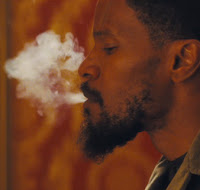 Django Unchained - Amongst many thoughts I was having walking out of seeing Django Unchained the one that seems to say a lot of it all at once is how much on first viewing I wasn't happy with the movie's soundtrack. That's really just unheard of for a Quentin Tarantino movie, and I think it speaks to a general air of disappointment I have with the movie. And see I write that - that I am disappointed with the movie - but then I immediately start recalling all the pieces I really enjoyed (not to mention all the think-pieces the film's inspired, which it deserves and elicits and are all very interesting) and I think to myself that "disappointed" is a strong word for it. But it's not. Pieces work but somehow the movie just really didn't gel. I mean, besides the soundtrack, are there really even that many lines of dialogue I'm going to feel the need to quote from this movie in the future? I'm guessing maybe some from that hysterically funny Ku Klux Klan scene (I'd seen bits in the trailer and thought it seemed like a decent joke but in the film itself, the way it keeps going and going, I was surprised at how hard he got me laughing with that whole sequence). Maybe my problem is that QT never got me past my Jamie Foxx problem - I just do not like Jamie Foxx, and that never much relented as hard as they tried. On the other hand I thought Christoph Waltz was wonderful and carried the whole thing; sure it strikes similar notes to his Basterds performance, but what he's got works, it works really well on me. I find him terrifically charming on screen. Samuel Jackson and Leo Dicaprio are also both doing marvelous work, the former perhaps the best of his career. It makes me crazy that his nomination for Supporting Actor will probably get steam-rolled by that Alan Arkin bullshit in Argo. 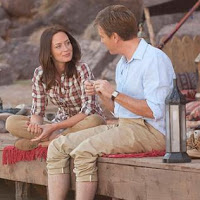 Salmon Fishing in the Yemen - It was a very smart person who decided that Ewan MacGregor and Emily Blunt should star in a movie opposite each other with their natural accents. The movie just glides right along on all of that charm. I mean there is nothing more to it than that (although Kristin Scott Thomas has a couple of awkward laughs tossed about in there) but on a crappy afternoon on the couch there are worse ways to spend a couple of hours than with these two sparkling dears. 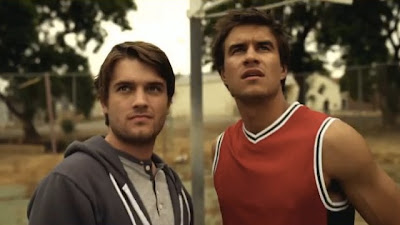 John Dies at the End - I really wanted to like this, I ached inside to like this, I really enjoyed the book (you should read the book and you should read the book's sequel, they're both great fun). But I did not. I did not like this movie. It's one of those instances where something works great on the page but is absolutely without a doubt unsustainable on-screen. In the sort of way where you go back and have to reassure yourself that you really did like the book, and somehow it really did work there, and you aren't a crazy person who should have your brain checked. The two guys they got to play Dave and John are likeable enough for total newcomers, they weren't the problem. (Although this could've been a rave review if they'd have made out once or twice, just sayin.) It's just too out there for its own good. It stops seeming interesting and becomes this dulled hum of eye-buggering wackiness. 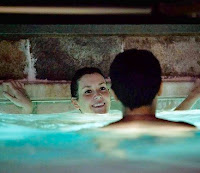 Hello I Must Be Going - How I spent My Summer Vacation - Watching movies about Melanie Lynskey diddling young boys. Thankfully she keeps it legal in this one (although barely!) She's wonderful here though, adrift and sad and not entirely likeable at all except for, you know, being Melanie Lynskey and therefore being totally likeable anyway. Movies like this, where we get to see a character actor shine in a leading role, they can be such a treat. She takes the chance and runs with it, turning in some fascinating and lovely work. And hey if I had the chance I'd let Christopher Abbott go down on me in front of my parents too. 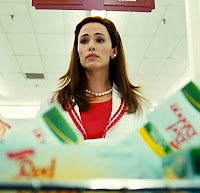 Butter - I hate it when these wanna-be-sharp black comedies lose their heartlessness and decide to get all goopy in the end. It doesn't have the courage of its wanna-be convictions. But I still liked the movie alright. With a few more script passes I could have loved it though. Olivia Wilde, who I cannot normally stand, was totally game and having fun, and the movie did nothing with her. Jennifer Garner, who I normally love, was kinda all over the place, her heart didn't seem to be totally into it, but then her character bore the brunt of the movie's indecisive tone so its not entirely her fault. In summation, Hugh Jackman looked really freaking hot as a dunderheaded car salesman in dad pants. 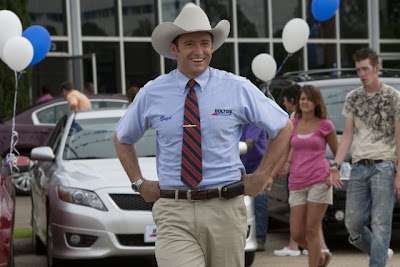 The Best Exotic Marigold Hotel - Gah I can barely remember watching this movie, but I know I did. It was like two in the morning when I finished, so you'll excuse my vagueness - I think I may have dreamt that kickboxing match between Maggie Smith and a feral Judi Dench? And Bill Nighy was there, and he was naked from the waist down, riding on Tom Wilkinson's shoulders while Tom Wilkinson was on an elephant? Or something. It was like Cocoon, only riddled with patchouli! 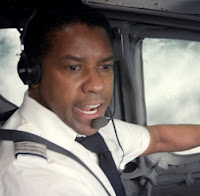 Flight - I have a very soft spot for Robert Zemeckis movies; I just like the way he rolls. His movies feel like Movies, you know? Old-fashioned very mainstream crowd-pleasing things. (At least when he's using real people not pixels, I mean.) So I was surprised at how grungy this thing got - I knew from that opening scene with all that landing-stripped lady-crotch leering that this wasn't my mother's Zemeckis. Forrest Gump would have passed right out! (Jenny would have been fine, though.) The crash scene was suitably horrific - I do love a plane crash scene. I file them away in my "This Could Happen To You!" mental binder so I can flip back to them every time I get on an airplane. This one will go great next to Fearless and Fight Club and Final Destination. I did think Denzel was good - that I haven't been able to deal with him for awhile makes that mean more than it might have a dozen years ago. I believed him. But the entire final two-thirds of the film just meanders and meanders all over the place, and this continues to be The Year of John Goodman Giving Performances I Find Tremendously Annoying. And the music was just too damned much - am I watching a movie or a series of Doritos commercials punctuated by coke-snorting?

Red Hook Summer - Right around the time I wondered what the fuck was I doing still watching this movie, it got interesting. The last half an hour or so is interesting. But the lead kid, bless him, was like the anti-matter of charisma, and there's only so much sermonizing I can handle before my eyes roll back in my head, never to return. Which is why it got interesting in the last half an hour, when things get flipped on their head, but it took a lot getting there. 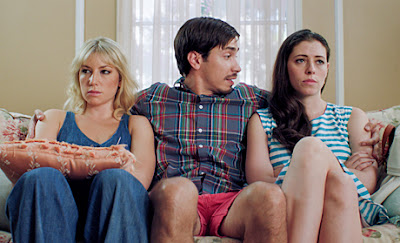 For a Good Time, Call - Totally charming, as anything with Ari Graynor in it is apt to be. I really wanted to immediately go online and make gifs of her doing dirty mouth things to a dildo but I refrained (I'm sure if I were to look I could find they already exist anyway). It's totally a Pink Box Movie and unashamed of that fact but I did get a little bit weary of the fake drama of these things. Just let them be charming, dammit! Do we really have to jump through all these fake feud hoops? And Justin Long's character might have given voice once or twice to not being neutered but he still came off a little too much as the sexless gay best friend without a life of his own for my taste. Not that he wasn't fun. Maybe I just really wanted to see him make out with somebody. (Ding ding.)
.
Who? Jason Adams When? 5:42 PM

Agreeance on Best Exotic Marigold - just a few days later having trouble remembering it - but have to say I found Salmon Fishing to be just as bland and dull and beige-blah, tho I do love its 2 stars as well.

Nice reviews. I agree with you on Perks. (Unfortunately, it's the only one of the 10 I've seen, though I'm looking forward to Django when it opens in London in a couple of wesks' time.)

If you really like plane crash scenes, have you seen Alive? Horrifying crash at the beginning. You may want to add it to your list!