Yeah They Got The Beats 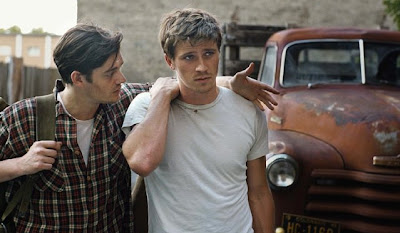 I always judge movies about the Beats by how much they convince me that these people actually aren't self-indulgent assholes who'd gnaw through my last nerve within five minutes of meeting them, and might actually be some fun to hang out with. On this count, On the Road is actually pretty successful. It's an easier movie to deal with than the book is to put up with at my age, let's put it that way. It keeps the doped-up speed-word philosophizing to the bare minimum (Tom Sturridge is the worst offender of this as the the Ginsberg-ish character of Carlo Marx, but he's adorable and haunted enough to get away with an awful lot of it) and instead focuses on the blush of enthusiastic youth...  as Cosmo Kramer might have said, it's a story about love, deception, greed, lust and unbridled enthusiasm.

Lust being key - this is a damn sexy movie. We've all had a character like Dean Moriarty in our lives - that ball of lightning in the center of the room we're all drawn towards even while we know it's gonna burn, but man, the warmth when you can get close enough is almost worth it - and Garrett Hedlund is terrifically good at capturing that essence. You can understand why everybody's throwing themselves at him - it's not just the body (which is fine, don't get me wrong) or the matinee looks. Indeed he tempers that lovely face of his with a grin that can switch from devilishly charming to swollen and desperate, and that voice that can go from shake-you-to-your-boots baritone to hoarse and petulant, in a heartbeat. But it's the swagger - he is built for seduction, and whatever it takes to con somebody in to taking him in and showing him a good time, he's gonna give his all. While taking more, of course.

Sam Riley doesn't have as much to work with as Garrett does - it feels like we spend the whole time watching Dean from over Sal's shoulder; he's our Nick Carraway, eyeballing an omnisexual Gatsby in a stained white tee. And like Gatsby, it's a lopsided tale - our eyes are mainly looking in just one direction. But his voice! That voice he uses is a thing of wonder, made to make words sound as if you've never heard them before. When this becomes prominent late in the game - once his book begins to take shape - it helps ever so slightly to right the ship left circling in Garrett's tumultuous wake.

Inevitably with these things, it's wheel-spinning - there's not really a story per se, just a bunch of debauchery in different locations with long stretches of asphalt in between. It's as if Dean and Sal tie their big new bright friendship to the back of their big new bright sedan, and we watch the pavement take this full shiny thing and grind it down to a nub. But man, there's sparks!
.
Who? Jason Adams When? 12:53 PM

I share your reservations about the Beats and especially OTR.
I read it in 1969 and the only thing I remember is some enthusiastic mooning over a farm wife's offering of ripe peaches with frozen fresh cream. I suspect that's all I actually need to remember.
But I'll follow you and trek to see the movie. thanks for your comments.

What about K-Stew? Read a review today saying that she was best in show.