Just To Sprinkle Stardust, And Whisper 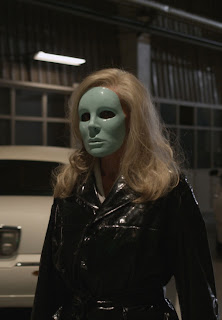 I'd avoided reading anything much about it so the only things I knew about Holy Motors going in was that it was weird and that it had to do with "the movies." While the former turned out to be exceptionally true, it was the latter that turned out to be key. In fact it's pretty obvious it's going to be about "the movies" from early on, since one of the first images (if not the first?) is of an audience in a darkened auditorium staring right back at us, the audience in the darkened auditorium, accompanied by deafening silence. It's immediately jarring - we can see the light from the screen reflecting on them so we know they are looking at something. But there's no sound, either from what they're looking at or from the audience themselves, who do not move. A moment later we learn they're watching a silent film, but the damage is done - we are off-kilter. 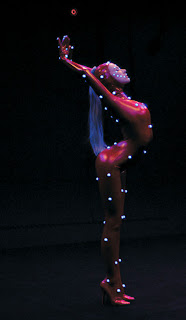 And so it goes - kilter ain't got no place here. The film seems to adhere to only one logic - that it will upend whatever logic you might be forming about it, in real time. That's not to say it doesn't make any sense - instead it sorts out an entirely new sense. We just don't have the pieces to put it together. Some will probably find it obnoxious, or off-putting, or entirely incomprehensible - I kinda found it thrilling, myself.

Not to knock Christopher Nolan again... okay who am I kidding, I'll always take the chance - this is what dream-logic looks like. Holy Motors comes about as close to making me actually feel like I was inside of a dream in anything since Inland Empire. Lynch came to mind several times, but never in a copy-catty way like something like I Can See You (my review) did with its old-timey microphones and velvet curtains. More just in that vibe, that unsettling but comforting sense that yes, this step leads to that step, while the space between equals eons, or milliseconds, or monkeys. 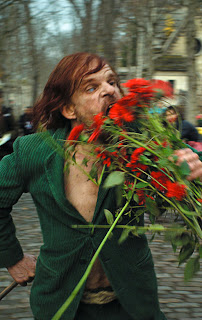 The allusions don't end at Lynch - I kept getting a Fellini vibe too (especially in the incredible and unforgettable scene with Eva Mendes... and no I never thought I'd ever say those words accompanied by that name either), which fits with the Toby Dammit-ish netherworld of movies that Carax is going for. The weirdos behind the scenes, reconstructing reality through their terribly skewed points of view. Now the cameras are just too small to even see. My "in" as it were, besides knowing beforehand this was a movie about movies that started with people watching a silent movie, was the lead character's name (that is, the first name the character has) - he is Oscar. Oscar, the actor. Maybe even the best!

In a just world Denis Lavant would be snatching at that Hollywood statue himself anyway, because good god is he brilliant here, called upon to do literally every single thing an actor could ever be called upon, and doing it from moment to moment with a completely convincing chaos that keeps making its own perfect sense. He got me every time - you think you've got a handle on who he is, that you've seen the real man, only to have another layer revealed, and another and another and another. By the time we get to where we get to... well yeah, sweet comforting nonsense is the only thing left. Who were we when we were who we were back then, after all. 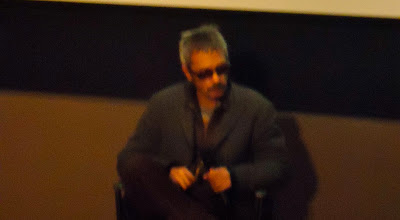 As you can see from that totally blurry picture I took, Carax did a Q&A after the film last night and he gave precisely the perfect Q&A for this movie - he mumbled, he seemed simultaneously amused and horrified at having to explain anything, and he somehow managed to come off as genuine and unpretentious while barely answering anything at all. Usually it's better to leave all the rambling to us people out here.
.
Who? Jason Adams When? 12:33 PM
Labels: Christopher Nolan, David Lynch, reviews, Starfucker

Such a fan of Carax, so I can't wait for this one. If you've never seen his movie Bad Blood aka The Night is Young aka Mauvais Sang with Denis Levant, Juliette Binoche and wee Julie Delpy, you must.

Must have come out earlier over this side of the pond as I saw it a couple of weeks ago and am still intrigued by it and find myself randomly remembering scenes from it. I'm completely with your experience of it but additionally I found it incredibly moving by the end - where he goes home to his 'family' and the car goes home to its family. I was really in some swoon of melancholy walking home after that. Despite the utter strangeness, it was somehow so TRUE.

Have you seen "Lovers on the Bridge"? SO GOOD. "Holy Motors"? SO SO GOOD!

And the Fellini feel isn't a surprise. The film is peppered with film references from the obscure to the obvious (oh high Edith Scob wearing a mask!)