Putting The Goof In Gothic 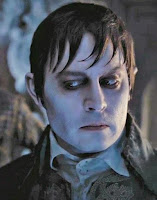 When the first picture of Johnny Depp in his Barnabas Collins get-up for Tim Burton's big-screen adaptation of Dark Shadows was posted online, I popped a gasket. I'd long been over Johnny Depp's wacky make-up and hair-do schtick but something about that Gashlycrumb train-wreck stirred up a deep loathing inside of me, and my claws were out. Then the trailer came out, and pretty much everybody pounced... but I didn't. In an about-face to snap your neck I was surprised to find the trailer... charming? Funny? Like Burton maybe unearthed a smidge of Beetlejuice from somewhere buried deep inside of him and shoe-horned it in? All of these things. Then the movie came and went in a poof of surprising audience apathy and I missed it.

Until I found it. I watched it the night before last and I suppose it fell somewhere between my initial diametrically opposed instincts. There is a lot of fun to be had. All of Helena Bonham Cater's line readings are golden. Jonny Lee Miller has nothing to do but he's a good visual gag - the definition of pasty. Similarly Michelle Pfeiffer's left without a lot of material to work with... but she looks and sounds fabulous. Eva Green's having a blast vamping (heh) around with an accent she doesn't seem the slightest bit worried about keeping an eye on - it's a wonderfully bizarre performance that keeps the film on edge. There are several of Burton's female characters you can point to and see them cribbing from - Sally's hung-from-the-ceiling doll posture, Selina's catty posturing, that female Martian's bubble-gum-chomping observational uncanniness - but they come together in a entirely unique and fascinating amalgam. I couldn't take my eyes off of her. 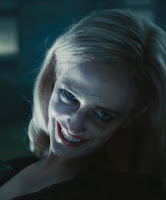 Depp, meanwhile, is kind of the straight man to her wackadoodledandy (only Tim Burton would have a straight man who tears open a dozen people's throats off-handedly) and his low-key take on Barnabas is appreciated, if only for the fact that he could have decided to have Barny speak like a mixture of Howdy Doody and Bea Arthur, knowing him. A bullet dodged, that.
Of course one step forward actually ends up being a couple of steps back, because his Barnabas is never that interesting, and similarly the movie struggles for its own purpose. It never finds anything of its own to say, and just ends up flailing around past the occasional fun little bit for two hours. I couldn't really tell you what the point is only two days after watching it - the witch keeps fucking with him, the family sees ghosts, Chloe Moretz is awful (granted it's a difficult nigh impossible moment to sell but her delivery of "Woof" might be one of the worst line readings this decade), et cetera et cetera. It's entirely aimless. It's goth by numbers. But I'd rewatch it a thousand times over before I ever suffered through Alice in Wonderland again.
.
Who? Jason Adams When? 11:28 AM

I had never seen the original TV show until a few months ago thru Netflix, it was dark and gothic but not bad. I was going to see the movie but never got around to it. I will be renting in on DVD and it looks pretty good.

I can't think of another human being who could deploy the phrase "Gashleycrumb train wreck" so beautifully.