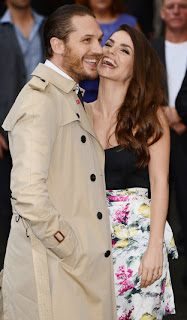 --- Lady Hardy - Tom Hardy's longtime girlfriend Charlotte Riley has landed the lead lady role in Tom Cruise's sci-fi action movie All You Need Is Kill for the very talented but as of late kind of lost director Doug Liman. Go forever gives me hope he'll re-find his footing. Tom Cruise on the other hand... anyway, she's presumably had Tom Hardy's penis inside of her so she deserves our respect.

--- Golden Goddess - David Fincher is not going to make a Cleopatra movie starring Angelina Jolie. My guess is the studio probably wasn't keen on his idea to dial down the scope, saying that the giant epic thing has been played out. Ang Lee is now rumored to be up for the gig. I think Angie ought to just mush this together with that 3D Cleopatra rock musical that Soderbergh had talked about doing, that's what I think. Jolie's already camp, just by being Jolie.

--- Scalped - Elijah Wood's remake of the sleazo-slasher Maniac has been picked up by IFC and will probably get a release here in the US before the end of the year. I'm going to go as Frank Zito for Halloween! All I need is a greasy t-shirt and a bloody-wigged mannequin, right?

--- Girl Power - Super awesome news over at The Film Experience - Nat's taking a vacation for the next week or so and besides the regular stand-in's he's got two totally awesome guest bloggers - Bachelorette's writer/director Leslye Headland and eternal awesome actress Melanie Lynskey will each take over TFE for a day! How cool is that?

--- Clay Maker - I've never watched one of these video chats between AICN Harry Knowles and somebody of note that he's been doing for awhile, but a conversation with Jurassic Park's dino-creator Phil Tippet about Ray Harryhausen might just get me over that hump. 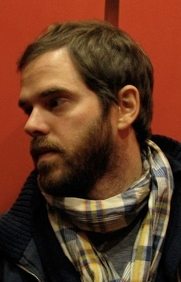 --- Pond Jumper - Sean Durkin, who burst outta the gate with the exceptional Martha Marcy May Marlene, is teaming up with the writer of the mostly exception trilogy Red Riding to make a four-part miniseries for British TV called Southcliffe about a bunch of shootings taking place on one day in a small town. Still no idea if Durkin still plans on making an Exorcist miniseries as had been announced back in May. Let's hope the light of day and the wrath of millions made him think wise.

--- Tight Time - There were two co-directors behind the first two [REC] movies - Paco Plaza and Jaume Balagueró. Plaza made the third [REC] movie all by himself, and as you can tell from my review, I loved it. (It's available on demand right now, go watch it). This freed up Balagueró to go and make something called Sleep Tight, which is a thriller about an apartment building's doorman setting his psychotic sights on one of his building's residents. It apparently got terrific reviews in their homeland of Spain, and it's now been picked up for a release here in the US in late October. Awesome! I do believe that next up for the duo they trade off and Balagueró makes the fourth [REC] film while Plaza gets to make his own thing. Teamwork!
.
Who? Jason Adams When? 10:31 AM
Labels: Ang Lee, Angelina Jolie, david fincher, Elijah Wood, horror, Melanie Lynskey, Ray Harryhausen, Steven Soderbergh, Tom Cruise, Tom Hardy

Whitch Frank Zito are you going to dress up as? Wood or Joe Spinell? If you go as Joe Spinell you're probably have to shove a garbage bag full of pudding under your shirt.