Where the Wild Beasts Are 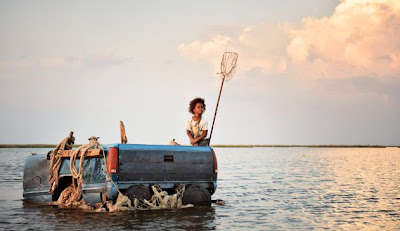 Critical wunderkind Beasts of the Southern Wild yanked me in a lot of directions, and it's been difficult figuring out a way to write about it since seeing it a few days ago. On the one hand, as a Katrina fable for the Huckleberry Finn set, it works. Six year-old Quvenzhané Wallis is every ounce the live-wire you've heard; she's impossible to take your eyes off of, like the love child between Kara Walker and The Boondocks - she is immediately iconic, in her orange underpants and too big boots. The music is beautiful - I wanted the soundtrack on my iPod before the end credits had finished rolling. There are passages - like a late-show excursion to some sort of floating river-bordello - that walk on water and effectively transport us to someplace entirely new and strange and achingly real in their drifting unrealness.

And yet, the spell would never entirely keep. I'd find myself wandering off thinking about Huck Finn or Mad Max or Where the Wild Things Are or especially Terry Gilliam's Tideland, the latter also about a very young girl whose imagination turns an ugly reality into something more magical. Tideland, with its truly desperate flights of decrepit fancy, was generally reviled and shunned when it was released, but I think I prefer its less romanticized sweep on similar territory - Beasts wants us to emotionally connect to what basically consist of a bunch of bizarrely ennobled child abusers in a way I was never entirely able to. It was like an entire film starring just the old lady in Dante's Peak several times over, and we're supposed to want them to stay on the exploding mountain top because she I don't know, had some kick-ass flannel and made good stew? 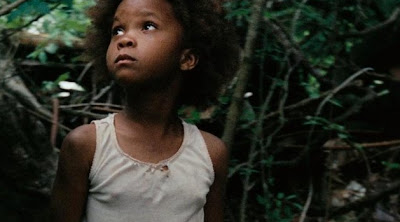 Basically I kinda really wanted Hushpuppy to get the hell out of there the whole time, and the film, insistent in keeping its magical kid's-eye point of view, didn't. The Bathtub just seemed to me like a miserable place filled with to-the-deathbed alcoholics and whack-jobs, and as that lovely music swelled and needled me towards what I guess what was supposed to be a love or at least an appreciation for these down-home folks making do with less than nothing, I just kept thinking how nice Hushpuppy looked cleaned up in her dress in the FEMA tent and how maybe she oughta go try that again instead of standing in shit and innards anymore. Call me a priss! But there it is.

Listen: I come from real poverty. I was poorer than poor as a kid. I was like the opposite spectrum one percent. The bottom one. Yeah I have plenty of good memories of that time, of course I do, I was a kid and a pile of blankets could fascinate me for days. But they don't consist of idealizing it with nuggets like "People who live closer to the earth are just so folksy and wise!" No, a lot of the time they are just dirty and crazy. And I'm glad to be out of that. 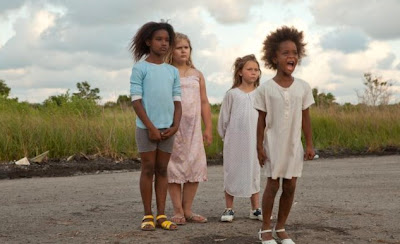 Maybe I'm just not so good in general with myths about poverty anymore. Beasts certainly never averts its gaze from the uglier side of its world. There is death and ooze and fire and anger and a whole lot of loss. But when it tips it hat towards expressing a sense of "People doing the best with what they have!" it loses me, because they aren't doing the best they can,  and I can't quite figure how much we're seeing is supposed to be a child's interpretation of things and how much is just some really really irresponsible living going down, which chafes away at my sense of wonder and magic and just makes me irritable.
.
Who? Jason Adams When? 5:51 PM

i really appreciate your interesting perspective / review. wallis was the highlight for me.

Thank you! You so perfectly captured my thoughts about this movie.
I saw "Beasts" at the Seattle International Film Festival in May and while everyone else around me LOVED this film, I left the theater feeling weird. I mean, it was visually stunning, and you're spot on about the musical score, but I had a serious problem with the romanticized view they gave of that environment.
Sigh...my aunt lived through Katrina's devestation, and yes FEMA and the state governments 'effed up a lot of crap, but I'm not 100% on board with the message this film is sending.
But gawddam, that little girl! Brilliant!

Oh, my God. Thank you. I hated all of the adults in the movie too. When the father pulled her out of the FEMA place and shoved her on a bus because he couldn't take care of her any more, I wanted to kill him. Why didn't he just leave her there where it was clean and there was medical care? I just kept hoping they would all drown.