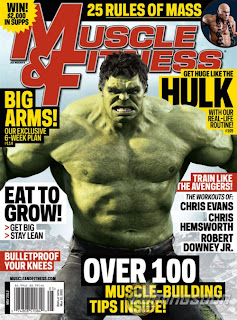 --- Fitness Smash - Love this! The Hulk is on the cover of Muscle & Fitness! That's awesome. He's no less CG than that Zac Efron cover of Men's Health that came out earlier this week, and about as realistic a goal for us mere mortals to achieve. Anyway back to Hulk - Slash rounded up a bunch of reactions from folks who saw The Avengers at its premiere last night and word sounds very good, especially with regards to Mark Ruffalo - a lot of people singled him out as best in show! That's terrific, it's good to hear Ruff getting some love.

--- Two Chained - The teaser poster for Quentin Tarantino's Django Unchained is here, and it's some simple pulpy goodness. Can this movie come out now? I'd really rather like to see it already. This waiting thing, man. No thank you!

--- Bane Vein - It's only a couple of months until The Dark Knight Rises comes out so we're getting more Bat-junk to clog our brains with until then - DH helpfully rounded up a few links to new pictures and interviews and stuff. There's a look at Joe Gordon-Levitt in his cop uniform worth a look see, plus that pretty bad-ass shot of Tom Hardy as Bane you see there to the right. Although how much of that is actually Tom Hardy seems in doubt - it's pretty much as much a cartoon as that Hulk cover.


--- Super Spy - They also rounded up the same sort of stuff from Sam Mendes' James Bond Movie called Skyfall, with a shot of Ralph Fiennes and then a few delectable glances at Daniel Craig wearing suits. Suit suits, not bathing suits, unfortunately. Give it time though.

--- Beautiful Alden - Attractive young man Alden Ehrenreich, who we've given good gratuity to in the past (he was one of the dudes up for the role of Spider-Man before Andy Garfield got it), has landed the lead role in Beautiful Creatures, an adaptation of the first book in an apparently popular series (anybody familiar?) about star-crossed lovers and dark secrets in the South. It's being directed by Richard LaGravenese (he made Living Out Loud!) and co-stars serious thespians like Viola Davis, Emma Thompson, and Jeremy Irons.

--- Why Not Just Al - The film-makers behind Alfred Hitchcock and the making of Psycho - that's the one with ScarJo playing Janet Leigh, you may recall - have taken my long-stated advice and changed their title. It is now called simply Hitchcock. I guess that will do, although it's a bit obvious a pick. 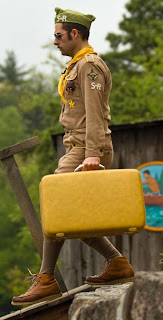 --- Scout's Honor - There are several new pictures from Wes Anderson's much anticipated Moonlight Kingdom over here, and oh dear I can already tell that I'm going to be all hot and bothered about Jason Schwartzman in his well-fitted boy scout uniform. He's wearing shorts and he has killer legs, y'all.

--- How Now Jay Kay - The first tid-bits of information on JK Rowling's next book are out, which is being billed as "for adults" - although somehow I just can't see her describing horse cocks, so "adult" might be a bit forward. It will be called The Casual Vacancy and it's described as a "darkly comic" tale about a small town and murder. 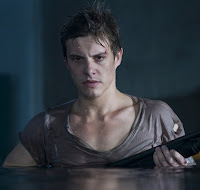 --- Face Space - If you want to know some more about how Alfonso Cuarón is preparing to blow our minds with  his" George Clooney and Sandy Bullock in space!" movie Gravity, and of course you do, then head on over here for a bunch of technical talk - basically the entire thing will be in single shots that last around ten minutes apiece (the opening shot is seventeen minutes long!) and he went at it as an entirely CG-animated movie, then grafting the actors faces into the scenes. If this was George Lucas we were talking about I'd be worried bu Cuarón is a visionary and a great storyteller too, so I am not worried, only erect.
.
Who? Jason Adams When? 1:02 PM

I just want to put it on record for all of the tweens that have stumbled upon this I've been a fan of Alden Ehrenreich since Tetro, damnit!

Skyfall looks awesome. So excited. A little worried it is going to turn into The World is Not Enough, but not too worried. Adele must sing the theme.