Talking Movies With Actual Words For Once 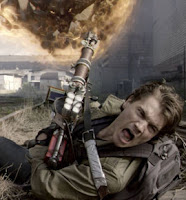 I didn't see nearly enough new movies over the holiday. I'm falling desperately behind! Out of the movies now in the world that I want to see, I still have to see Tintin and Carnage and A Separation and maybe The Darkest Hour (that's dependent on word of mouth though, of which I have heard absolutely zilch - anybody see it?). Maybe Pina? I'm not much of a dance fan but the trailer made it look visually interesting, plus Wim Wenders, and if I'm ever going to see it it should be while I can see it in 3D.
On the other hand, the movies that are out in the world that I really don't give a shit about seeing (this is a longer list) are War Horse and Iron Lady and Extremely Loud & Incredibly Close and J. Edgar and We Bought A Zoo and Sherlock Holmes 2 (plus no-duh movies like New Years Eve and the Alvin and the Chipmunks squeakquel sequel). There just ain't enough hours in my life left for it.
But I did manage to see a few movies, so I'm going to try and spit out several quick succession reviews right here and right now for a few of them lest they get lost in the shuffle since I've been bad about writing up this sort of thing the past few months. Now, go! 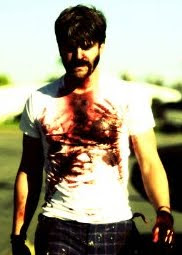 Bellflower - I had high hopes for this one since it got some good notices and the footage I'd seen looked visually wowza (the director built a special camera in order to create the over-saturated look) and I'm generally of the opinion "Yay flamethrowers!" And you can double that for flamethrowers on cars. Yay yay, that is. But no, unfortunately the movie was stuffed to the gills with one hundred thousand percent douche-bag accept no substitutes and it became a test of will to not shut it off. I made it through to the end waiting for somebody to die violently, since I was promised violence in the opening flash-forward sequence, and yadda spoiler yadda it only half-heartedly came through there, even. I didn't realize until the closing credits that the director was also the star, and then the self-indulgence made more sense. Dude, brah, you're fucking annoying. If the movie had been a little more aware of how annoying they were then it might've had some interesting stuff to say in an interesting way - he did manage a nice enveloping aura of doom - but it remained firmly infatuated with its unbearable bunch instead.

Quarantine 2: Terminal - While this here sequel to the American remake of the excellent Spanish zombie film [REC] still remained set on the airplane (so the first twenty minutes or so) this movie was fairly terrific. It exploited all of the elements that can make flying so nerve-wracking exceedingly well - the claustrophobia, the annoying neighbors, the primadonna flight attendants, the strange noises and turbulence, and especially the overwhelming sense that everything you're touching is coated in a thick sludge of monstrously virulent germs - but the plane lands way too early and the film becomes pretty routine from there on out. People trapped in a confined space as the monsters pick them off one by one, popping up at just the right times... I will give it this: I never thought I'd see a wheelchair-bound old man with Parksinons get gnawed on by a zombie rat. 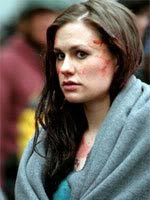 Margaret - I'm intimidated the most to write something on this movie right here right now off the top of my head, because this is a movie so dense and somewhat sloppy, somewhat wonderfully so, that I don't know I can do it any justice after a single viewing. It morphed along as I watched it, and refused to become anything I thought it was going to be - it very much wants to be its own movie, and I can understand now why it never got a proper release because I can understand nobody knowing what to do with it. It starts out a little bit wobbly, and then THAT happens, and then it's amazing for a very long time, but then it keeps going and you keep thinking it's ending but it has an entire hour up its sleeve still, and by the end you're exhausted but happy about it? I did like it very much, and I bless Kenneth Lonergan for sticking to his guns and making a movie this... itself. It hits some very very high notes, and I think with a second and a third viewing I could come to love its tumult. But it will take a second and a third viewing.

Tinker Tailor Soldier Spy - It's probably because I went into the film knowing it was supposed to be dense with information and I had to pay really close attention, but I didn't have any of the trouble I've heard people have had with understanding ebb and flow of the movie's central mystery. I'd never read the book or seen the original miniseries, but plot-wise this seemed pretty standard issue spy stuff to me. Which kind of disappointed me? I didn't love it like I was hoping to, although it is a rapturously good-looking thing with solid performances all around. It's very cold and very smart, which are wonderful attributes I very much appreciate but it makes the film itself hard to fall in love with - you're paying such close attention to it that you're never really able to get lost inside of it. Perhaps the emotions - which are there - hit harder with a second viewing, once you know the story. Lord knows I grow more profoundly affected by Alfredson's last movie Let the Right One In every new time I watch it.

Bill Cunningham New York - A delightful documentary that sneaked up on me there at the end with a sucker punch I didn't expect - it finally addresses the elephant in the room, which I'd begun to give up any hope of it touching for whatever reason (I thought maybe Bill had made it off limits), and gives us one of the most human, deeply touching scenes I've seen in years, and suddenly everything before and after takes on a newfound poignancy. Up until then I watched the film hoping I'd bump into Bill Cunningham on the street so I could get photographed by him just one time, and after it I hoped I'd bump into him just so I could give him a long hug. Which he would probably run away from, giggling.
.
Who? Jason Adams When? 2:06 PM

Completely agree on Bill Cunningham New York: I want to hug him. Loved the film. I found TTSS absolutely unbearable. I cared about none of the 25 characters (only Tom Hardy brought interest (duh) even with that wig. I was also trying so hard to comprehend the thing until I realized there was nothing to latch on to.

Agree too about 'Bill Cunningham New York.' Very moving part. It's my favorite documentary this year so far.