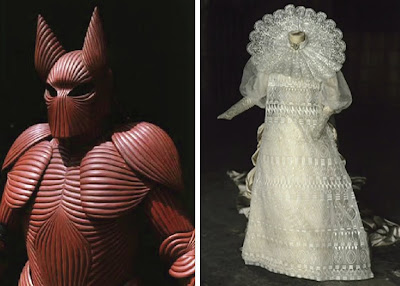 Oh this makes me very sad - the designer Eiko Ishioka died this past Saturday at the age of 73. I wrote up an ode to her costumes for Bram Stoker's Dracula back in October (filled with lots of great pics; you should click over if you missed it) saying:

"Nowadays with television programming like Project Runway where we see people told on a weekly basis to make a dress that looks like a Tupperware full of spaghetti it might seem quaint, but at the time for a kid in a small town this sort of symbolic expression through costuming seemed revolutionary.
It wouldn’t be until years later that I’d see similarly hallucinogenic outfits in the films of Kenneth Anger and Alejandro Jodorowsky, obvious precursors to this sort of thing, so there will always be a scorch-mark inside my head that looks like that billowing orange gown that Lucy meets her wolf-man lover in. And I wouldn’t have it any other way."

She changed the way I looked at movies, and her work was part of the reason I became so obsessed with them, and I mourn all the amazing costumes we'll never get to see without her. But I'm sure her work opened up the minds for future generations of costume designers, and we'll see her influence for as long as people make movies. Her work for Tarsem's Mirror Mirror will be her swan song, as it were. 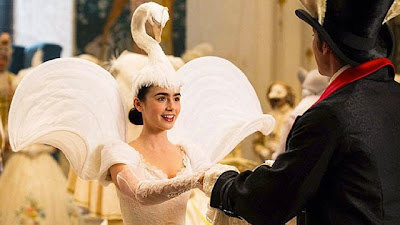