Paw-Paw in The Future, or Arthur in Beginners?
.


poll by twiigs.com
.
I kind of hesitate to do this one because I know general opinion swings against my beloved Miranda July and her  body-less cat o' quirk so putting her up against her husband Mike Mills' adorable movie pup seems unfair... but it's just gotta be done. Firstly, to make up for the dead dog post I just did. But mostly because how weird is it that this married couple of directors both put out movies this year with talking animals? And they even came out on DVD the same day. It turns them into nice little companion pieces, I suppose. They are similar sad little things.

I guess I should take this opportunity to write my thoughts on Beginners, which I finally caught the night before last. It was lovely. Graceful. Finely tuned into those characters, warts and all - I liked how creepy they allowed Goran Visnjic's character to seem at times; a lesser film would've slapped a saintly halo on the gay widower - and filled with really solid work in every corner. Ewan and Christopher Plummer and Mélanie Laurent and Mary Page Keller all shone. And every time I paused the movie to step away for a second, I'd have to gawk at how lovely any random frame looked. A beauty. (And it really seemed to be riffing on Annie Hall a lot, didn't it? I don't think it was just because I'd watched that Woody Allen doc last week. The music, the fraught-with-neuroses romance - it even gets Mélanie into a loose man's suit for awhile.) 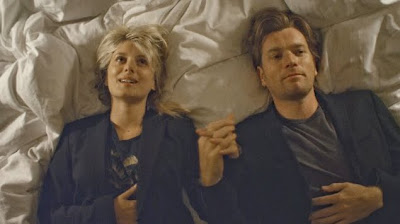 "Beginners" is easily in my top 3 this year. It was made with such assurance throughout, and the acting is exquisite.

I'm glad that "Beginners" is getting some awards traction despite that quiet, June release. It's not perfect - the Melanie Laurent character is a little problematic/archetypal/convenient for me - but the rest is genuine enough to compensate. Would love to see it get a screenplay nom at the Oscars.