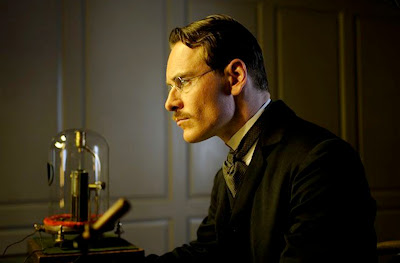 Did I really just write that headline? I did! The world just works sometimes. Okay, so first things first: When I sat down with Michael Fassbender  to talk about his role as famed psychoanalyst Carl Jung in David Cronenberg's A Dangerous Method a few weeks ago, there was one thing I had to know. One vital piece of information that'd make most everything clear. Thankfully, this being Michael Fassbender, he was plenty willing to share. (He's the sharing type, in case you hadn't noticed.)
"It’s in my contract. 'Must have nudity or sexual references.'"
Method, with its early 20th century repressions getting worked out with some talking and a vigorous spanking or two, comes at a time when all the world seems to be abuzz about Fassbender's other impressive piece (of work) in Steve McQueen's Shame, which was rated NC-17 for amongst things nudity and sexual references, so it's only natural for us to wonder. Last year we saw him take the predatory romance of a teenage girl to uncomfortably complicated places in Andrea Arnold's Fish Tank; hell, even his bromance between Magneto and Professor X was tinged with a sexual charge. And now he's doing double duty this Fall with two films about men's lives upended by their inability to rein in their libidos. But the filming of X-Men came in between these two films chronologically for him, and he said he doesn't really focus on these kinds of psychic overlaps anyway:
"I absorb something intensely over that two to three month period, the filming and whatever prep time I’ve got, it’s like every day, bang bang bang, you’re sort of soaked in it. And then I discard it and it’s off to all the research I did on Magneto from the comic books." 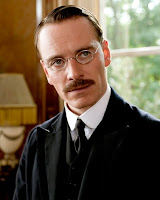 And whether it's playing the real-life Jung in A Dangerous Method or the fictional metal-helmeted super-human Magneto or being the fiftieth actor to take on Mr. Rochester, he takes a similar approach to characters that the audience might have pre-formed opinions about.
"There’s always a good amount of pressure. It’s always good to have a healthy amount of fear," he said. "You’ve got to respect it, and then disrespect it. Like Magneto, with such a huge loyal vocal passionate fan-base out there, you respect that, but then at the end of the day... this is my take on it."
Even at ten o'clock in the morning he was an electric presence sitting there right beside me, hair close cropped and surprisingly reddish, eyes so clear and bright they cut right through you - they bring to mind memories of January Jones morphing into diamonds in that same X-Men movie, actually - so even if I hadn't spent the past couple of years watching him prove just how thrilling his takes on things can be I'd have believed him in an instant anyway. Outta the way, world! Michael Fassbender's coming through.

Speaking of driving forces, his preparation involves reading the script several times a day, usually a couple of hundred times total, until he knows it backwards and forwards. For Method he looked at the outside information that was available - amongst it he checked out some clips of an older Jung on YouTube, and his autobiography - but that's never his main focus.

"The question is how do you sift through it all? You gather up as much of it as you can… and then kind of throw it all away. [laughs] You get hopefully an essence of the guy, and then the real function is within the script. What sort of story’s trying to be told in this hour and a half? ... At what point are we in this man’s life, what are we trying to tell with this section of his story?"

The old Jung he saw in the YouTube clips had "a real sense of lightness about him, a confidence" that he said was interesting to note as the place the man would eventually end up at, but wasn't something he could use for this point in the story of his life that Method focuses upon. From there Fassbender worked on ways to bring these ideas out into his physical creation of the man.

"That’s always interesting for me, to find the physical life of the character. At the beginning I wanted to show somebody who was very professional, very determined, very ambitious… that kind of Swiss-Germanic thing. You put the clothes on, and you start to embody how it would manifest itself. The very precise doctor at work who appears to be very confident and has self-belief... Everything has to appear like he knows what he’s doing. He’s trying to control things. But there’s also that doubt going on." 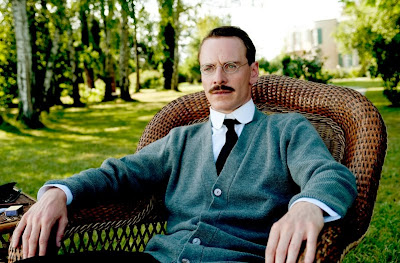 He continued, "By the end scene where you see him sitting in the cardigan, at that point I think he’s starting to discard that formality. I think the thing that’s interesting about Jung is, Freud’s got structures and he works within those sort of structures rigidly and doesn’t veer outside of that, whereas Jung’s eventually said anything’s possible. So I wanted to show that by the end of it you have somebody that’s physically different, who’s kind of throwing away those social confines about how we’re supposed to go about living our life."

I could see Jung coming back to life in front of me as Fassbender thought through the character again - he mimed a stiff collar that wasn't there, and then he slumped down in his chair as he thinks through to the end, his body limp as a tossed-aside doll. It's the whole movie in fast-forward, a mini performance just for me. I liked this. I could get used to this. 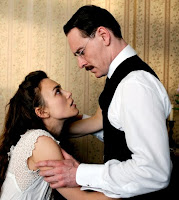 Mentioning the first scenes they shot, the ones early in the film where his co-star Keira Knightley has her own psychical challenges to mount (Sabine's body contorts violently in her early sessions with Jung) a little bit of an awestruck smile spread across his face.

"Keira’s just so cool. She's ready to play, to have a laugh. And fair play to her, she just went for it. She's got balls."

I refrained from taking the bait there, even though he was the one to bring up balls. And I agreed with him. They've all got balls! He went on to say how he was in good hands with director David Cronenberg:

Okay okay he did say that, but when I told him how many nightmares Cronenberg's been responsible for shaping inside of my brain he slowed down and chose his words precisely:

"[Cronenberg]'s always going beneath the surface of what appears to be normality. He... goes to places that perhaps would be sort of uncomfortable... he challenges the audience... without necessarily giving any answers, but... poses... questions..."

Fassbender posed the word "questions" as if it was a question itself, which when it comes to Cronenberg is entirely the point. And so we shared a laugh over the diabolical, unknowable, many many questions of David Cronenberg, his eyes cutting through mine one last time, and then he was gone, his laughter hanging in the room like the sensation when you just wake up from a dream and the world slowly readjusts back to what it was before, the shimmer on objects eking out its charge. 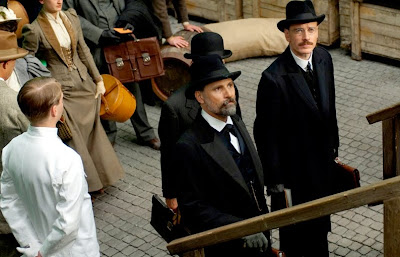 A Dangerous Method's out in NYC + LA this Wednesday.
STAY TUNED for my interview with

Great job Jason! I posted a link at FF! xoxo

great interview!
(didn't comment it in your previous fassy post, but i'm so jealous about you two playing footsie under the table!)

Good interview, great to hear that the Fassbender is every bit as lovely irl as one would hope (it's always heartbreaking when great actors are actually real-life douchetards, no?).
The Oscars are beckoning him this year, the buzz is deafening at this point. Did your body go into a catatonic shock when your toes collided? ;)

I was in shock the whole time, Chris, from start to finish. I just happened to look down and our shoes were against each other, I have no idea how long they were like that. I couldn't feel anything the whole time I was there.

Awesomeness aside, how did you manage to have this dream come true? If you've already written about it, I must have missed it.

I stated reading this, and then passed out.
I awoke and continued to read. I almost passed out again... but eventually made it through.
THEN I popped into the comments area and read the shoe thing, and guess what? I passed outagain.
Phenomenal post and an amazing tale.