All They Are Is Dust In The Wind

I wish I had some way of reviewing Final Destination movies other than saying for the thousandth time that I have no way of reviewing Final Destination movies because I am struck completely utterly dumb in the face of criticizing them, so blindly infatuated am I, but here I sit, dumb as ever. With blind infatuation! It takes me about zero point zero zero seconds once the credits begin to roll for me to start looking forward to the next installment, and that crazy-person passion didn't dull an ounce here with Final Destination 5. They are what they are and what they are is bloody delicious catnip to me. 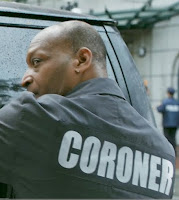 Alright, enough pseudo-apologizing - as far as I'm concerned the opening bridge-based disaster sequence in this movie is the second best opener this series has given us after Part 2's marvelously staged will-probably-never-be-topped freeway pile-up. It shouldn't have been a concern knowing the director was the main visual-effects guy for Avatar, but it looks like a billion bucks. Practically flawless visually, and edited with a palpable sense of tension and escalating horror. And so funny, in the very specific way that only the sick fucks like me who find this series hysterical. There are a million smart little touches at the edges that'll make this a killer (hardy har) for multiple viewings.
And I don't care how silly this sounds - the opening credits of this film are art. Hypnotic and abstract like Chuck Jones having a nightmare about the Home Depot. Once the editing kicks in and a hurricane of glass and shit are flying up in your face, forget about it, I'm lost.

So how about the franchise's bread-n-butter, the kills? Everyone seems to be pointing their finger at the gymnast scene, and rightly - it ranks amongst the finest the series has ever provided. The exact right kind of play between setting up the seemingly disparate parts and then knocking them over in that patented and still delightful Rube-Goldbergian way. Piece stacked on top of shaky murderous piece like playing Jenga in Hell.
And there's plenty of juice left in the elaborate mechanisms we see propped up suddenly veering right when you think they're going left - Death tossing his skeleton hands in the air and saying "Ah fuck it, just fall out the window then."
I did expect a little bit more from the introduction of the whole "Kill or be killed!" thing - that scene in the restaurant could've and should've been much crazier. I wanted it to escalate into complete chaos with flames leaping and knives shooting and guns exploding and meat grinders grinding... this is starting to sound like a deranged version of The 12 Days of Christmas, so I'll stop, you get my point. 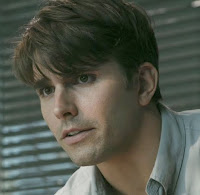 And the one lesson I wish the sequels would've learned from Part 2 went ignored again - give the CW-esque pretty-people-problems drama a rest. No dynamic between a group of characters has worked better than there, where we had a bunch of people who didn't know each other at all suddenly thrust together into this insanity, with no reason to trust each other at all. It varied the demographic for one - here there's one token older dude but otherwise everyone at this company is apparently the exact same age - and added a lot of instant drama that was a lot more curious than long-distance relationship woes.
Those gripes aside, what a fucking hoot. And the end! Oh I loved the end. I saw it coming and I still loved the end. Speaking of places where the CG shone - I want to refrain from spoiling what goes down but there was a shot therein that might be the single prettiest (in you know, a monstrously horrific kind of way) shot that's ever been in the series. Well done, people. Well done.
.
Who? Jason Adams When? 4:19 PM

I'm glad you loved the movie as much as I did Jason. It was definitely a true "Final Destination" film. The tone of the whole movie was just perfect. I'm having trouble figuring out where it ranks in line with the other movies though. The first one's the best and the fourth one's the worst. The second one has the best opening and the third one has the best ending. Maybe in terms of surprises, this one had the most. Unfortunately, one aspect of the ending was spoiled for me going in but that didn't hinder me from appreciating the tragic albeit epic reveal.