Pop A Cappy In His Ass

First things first: the best thing about Captain America: The First Avenger - well the best thing that's not a topless Chris Evans getting pawed at by Dominic Cooper - is Hugo Weaving's hilariously spot-on Werner Herzog accent. Your mileage may vary here but since I've got a Herzog fetish it got me through the rougher patches of movie. Indeed I realized at one point that all I was paying attention to were the accents - the subtle Teutonic variations depending upon their varying levels of evil between Weaving and Toby Jones and Stanley Tucci - the latter's is so silly he could only be a lovable good guy; the standard issue American dude of Chris Evans versus the showier Dominic Cooper's "I've got a mustache and I like the ladies!" slippery good-time Yankee Doodle fella; Tommy Lee Jones' wonderful Tommy Lee Jones impersonation; Hayley Atwell's clipped Brit coming from between two lips coated with the most hypnotizing lipstick I've ever seen... this movie is a mouth lover's dream!
Those sideshows aside it's not to say it's really such a bad movie that I just had to wander off mentally in order to survive. It's a perfectly serviceable movie. Once Evans gets juiced up to his usual fantastical muscle-man proportions he's a special effect unto himself, and he puts a lot of heart into the earlier scenes as the skinnied-down Steve Rogers. (But that skinnying down special-effect often wanders into the uncanny valley and Evans' head looks freakishly big for that body. It's a bit of a relief when he bulks up and we can stop being distracted by it.) 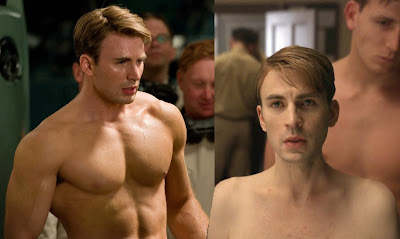 And the middle section centering on the jingoistic propaganda campaign Cappy finds himself the sudden star of is the movie's stand-out - not only is Evans' costume the snuggest (obviously a concern when judging this film), but it exudes a playfulness and a visual snappiness that's much needed.

But wander your brain does anyway, even if your life doesn't necessarily depend on it. See my biggest problem with the film, which I hinted at earlier today, is its lack of pop. There's not really much here that feels new, like we haven't seen it before. I knew once the bad guy revealed his weapon to be some kind of laser-gun person-evaporator early on that the film-makers weren't pushing their imaginations too far outside of the comfort zones. There are moments, like the aforementioned propaganda set-piece, where the style of the film overcomes that, and at least they never try to explain their silly laser-guns (It's magic! Magic is science for stupid people! The end!) And the actors are having some fun. (I could easily watch two hours of Dominic Cooper zipping around purposefully in high-waisted trousers. More of that please!) But mostly you do find your mind wandering. You think about Joe Johnston's The Rocketeer for awhile, and then Indiana Jones, and then Werner Herzog tears his own face off so you're paying attention again for a minute, and then maybe some Sky Captain and the World of Tomorrow flits by and you're all, "Oh god Sky Captain, I haven't thought of that movie in forever.  Wasn't Gwyneth Paltrow in that? That was weird."
.
Who? Jason Adams When? 1:58 PM

Sky Captain is AWESOME!
Gwenyth goes window shopping while giant robots destroy the city around her.

"Tommy Lee Jones' wonderful Tommy Lee Jones impersonation."
Hysterical! & spot on!
Saw it this morning and I agree with every word you typed. Especially The Rocketeer likening.

Saw it last night and this review is spot on. Those crazy green screens and CGI had me thinking of Sky Captain quite a bit. It wasn't a bad movie, but it wasn't a great one, either. Here's hoping Joss can pull of something fantastic for Avengers!