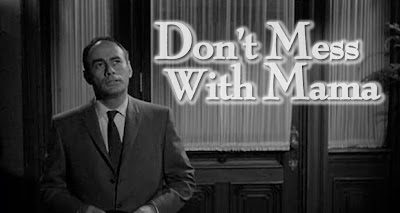 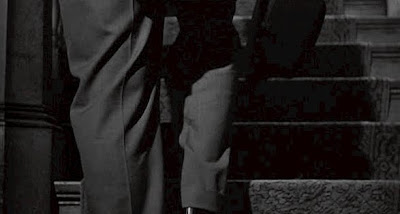 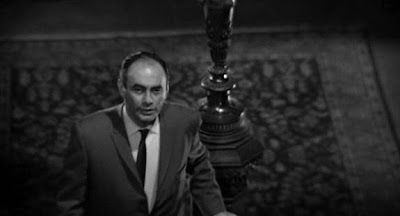 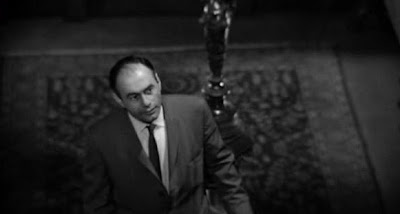 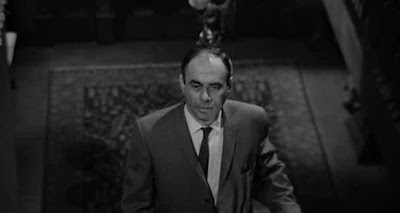 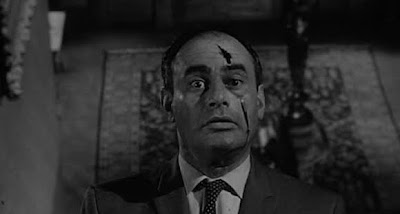 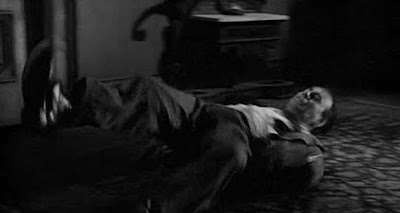 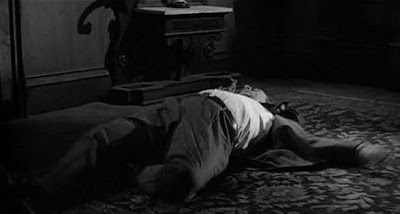 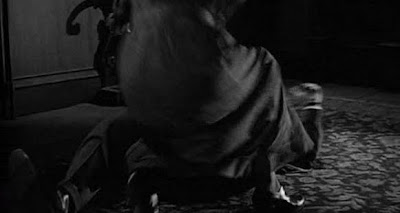 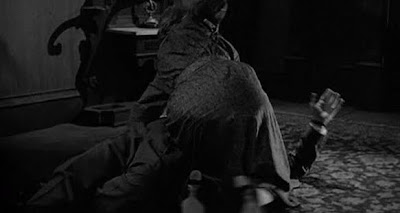 Psycho (1960)
Fun with gifs! I can't stop myself lately, apologies. The novelty should wear off at some point. Anyway I like the way, especially here with my Thursday Kills series, that sticking them in between static shots gives special moments a little extra oomph. As if this scene from Psycho needs any help from me in the oomph-department. (Note to self: Trademark "Oomph Department" for a sitcom about workers at the ACME factory.)
Ahem. So distracted this week! So distracted that I somehow, insanely, missed out on The Film Experience's Hit Me With Your Best Shot series yesterday in honor of Hitch's 1960 masterpiece. And I even watched Psycho on Tuesday! Two days ago! I was inspired to do so for the fiftieth time by Nathaniel's terrific interview with Manuel Muñoz, the author of a new Hitch-related work of fiction. And re-watching the film this week I knew it was time I tackled it for this here series of my own. But I'm too chicken to try and write anything on The Shower Scene. True fact: there is nothing that hasn't been write about The Shower Scene left. It's all been said, every word.
But as Nathaniel pointed out last night, Detective Arbogast's death might live in the shadow of that scene but it's just as powerful and visually arresting a moment. And it utilizes a space that Hitch loved using even more than the bathroom - the staircase! Once you realize it, it becomes a game on par with spotting his cameos, looking for the way that he'll incorporate a treacherous, terrifying staircase into his films. There's the endless stairs up to the bell-tower that terrorize Scotty in Vertigo: 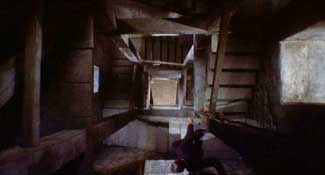 There's the endless series of stairs and stairs and stairs that lead up to poor kidnapped little Hank in The Man Who Knew Too Much, which his mother's voice, screaming out "Que Sera Sera" echo up and up and up as his rescue.
There's the shot of Cary Grant carrying the poisoned (or is it?) glow-in-the-dark milk up to wan Joan Fontaine in Suspicion. 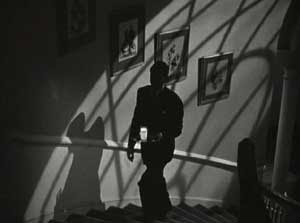 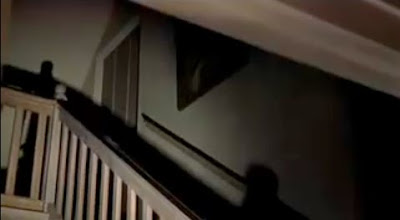 (Not to mention the stairs where poor pecked-apart Annie's body is found.) I could go on and on. One of his movies is called The 39 Steps! Most Hitch-scholars see the proliferation of stairs as a nimble way for Hitch to delineate visually between good and bad spaces - keep your feet on the ground level, or else! Once you start going upstairs - or god forbid, into the basement! - that's when hell's gonna break loose. 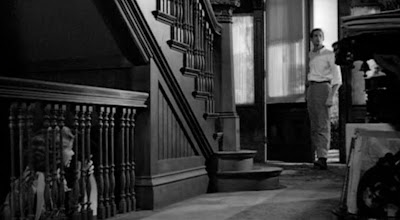 Stairs also, on purely visual terms, fit into the scheme of perpendicular movements that Psycho is stuffed (ha, stuffed) with. Stairs form a series of horizontal lines, stacking upwards, making the horizontals go vertical, and vice-versa. 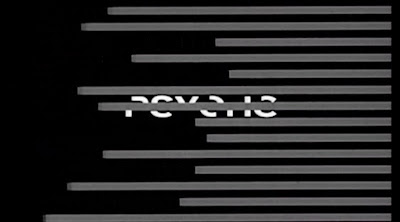 The world is up-ended, at odds. The crosses of lines, North to South, East to West, don't end with Saul Bass' famed credit sequence. Think of the low-flat horizontal (and modern) Bates Motel contrasted beside the vertical Gothic spike of the Bates house in back. 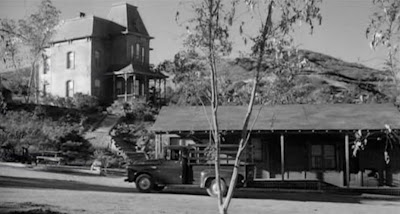 All the sliding doors and rolling up and down of windows. Blinds! 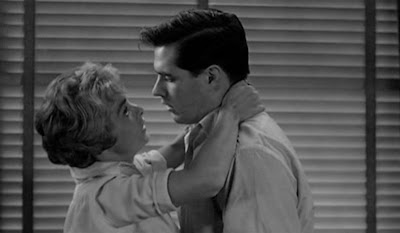 These things weren't by accident. It's well-known that Hitch story-boarded his films down to the most minute of details. Echoes upon echoes of shapes that form and reform, obsessively, haunt every one of his films. (Take a look at North By Northwest with the diagonals the film's title imply in your mind and gape in awe at the insanity of it.) The use of the up-down and side-to-side contrast here is violent, a crashing against each other of visual cues. A slashing, if you will.

--------------------------------------
Previous Ways Not To Die: Heads Ahoy -- Martyred For Sheep -- Heads Nor Tails -- He Loves Me Knot -- The Great Bouncing Brad -- Miss Kitty's 8 Mishaps -- Boat Smoosh -- Meeting the French-Tipped Menace -- A Magic Trick -- Slick Suck -- We Who Walk Here Walk Alone -- Raptor Bait -- Kneegasm'd -- Dare to Dream in Fincher -- Reach Out and Throttle Someone -- De-Faced -- Voluntary Drowning -- Cross Borne -- Pulled Up Hell's Sphincter -- An Arrow Up The Ass - The Numerous Violent Unbecomings of Olive Oyl -- Ack! Ack! Zap! -- Baby's First Acid Splash -- Chop, Drop and Sashimi Roll -- Forever Rafter -- Can't You Hear Me Now? -- Daisies Ways #5 - Harpoony Side Up -- Acid Dip -- On a Wing and a Prey -- For Standing in the Way of Sappho -- Busting Rule Number Three (For The Purpose of Number Two) -- Daisies #4 - Window Dressed To Killed -- Hands Off the Haas Orb -- Bullet Ballet -- A Single Vacancy at the Roach Motel -- A School Bus Slipped Thru The Ice -- Trache-AAHHHH!!!-tomy'd - For Mel Gibson's Sins -- A Wide Stanced Slashing --- Daisies Ways #3 - Scratch n' Snuffed -- The Victim of a Viscous Hit & Run -- Curled -- Kabobbed -- Daisies Ways #2 - Aggravated Cementia -- Boo! Nun! -- 2009's Ways Not To Die -- Bug Scratch Fever -- Daisies Ways #1 - Deep Fat Fried in My Own Unique Blend of 500 Herbs & Spices -- By the Yard End of the Stick -- Screwed From A Very Great Distance -- A Righteous Bear-Jew Beatdown -- Fisted By Hugo Sitglitz -- Xeno Morphed -- Fuck-Stuck -- A Vengeful Elevator God: Part 4 -- Lava Bombed -- The Cradle Will Rock... Your Face Off!!! -- The Food of the Nilbog Goblins -- The Slugs Is Gonna Gitcha -- Phone Shark -- Hide The Carrot -- Sarlacc Snacked -- Avada Kedavra!!! -- Hooked, Lined and Sinkered -- "The Libyans!" -- Axe Me No Questions -- Pin the Chainsaw on the Prostitute -- The Wrath of the Crystal Unicorn -- The Ultimate Extreme Make-Over -- Drown In A Sink Before The Opening Credits Even Roll -- The Dog Who Knew Too Much -- Don't Die Over Spilled Milk -- Inviting the Wrath of Aguirre -- An Inconceivable Outwitting -- The Five Point Palm Exploding Heart Technique -- Nipple Injected Blue Junk -- Your Pick Of The Deadly Six -- Thing Hungry -- Don't Fuck With The Serial Killer's Daughter -- DO Forget To Add The Fabric Softener -- Any Of The Ways Depicted In This Masterpiece Of Lost Cinema -- Rode Down In The Friscalating Dusklight -- Good Morning, Sunshine! -- Mornin' Cuppa Drano -- The Cylon-Engineered Apocalypse -- Tender-Eye-zed -- Martian Atmospheric Asphyxiation -- Maimed By A Mystical Person-Cat -- The Sheets Are Not To Be Trusted -- Handicapable Face-Hacked -- I Did It For You, Faramir -- Summertime In The Park... Of A Pedophile's Mind -- A Vengeful Elevator God: Part 3 -- Strung Up With Festive Holiday Bulbs By Santa Claus Himself -- A Vengeful Elevator God: Part 2 -- A Vengeful Elevator God: Part 1 -- Decapitated Plucked Broiled & Sliced -- Head On A Stick! -- A Trip To The Ol' Wood-Chipper -- Pointed By The T-1000 -- Sucking Face With Freddy Krueger -- A Pen-Full Of Home-Brewed Speed to The Eye -- Motivational Speech, Interrupted -- A Freak Ephemera Storm -- When Ya Gotta Go... Ya Gotta Go -- Hoisted By Your Own Hand Grenade -- Having The Years Suction-Cupped Away -- Criss-Cross -- Turned Into A Person-Cocoon By The Touch Of A Little Girl's Mirror Doppleganger -- Satisfying Society's "Pop Princess" Blood-Lust -- Done In By The Doggie Door -- Tuned Out -- Taking the 107th Step -- Rescuing Gretchen -- Incinerated By Lousy Dialogue -- Starred & Striped Forever -- Vivisection Via Vaginally-Minded Barbed-Wire -- Chompers (Down There) -- Run Down By M. Night Shyamalan -- Everything Up To And Including The Kitchen Toaster -- Sacrificed To Kali -- Via The Gargantuan Venom Of The Black Mamba Snake -- Turned Into An Evil Robot -- The Out-Of-Nowhere Careening Vehicle Splat -- "Oh My God... It's Dip!!!" -- Critter Balled -- Stuff'd -- A Hot-Air Balloon Ride... Straight To Hell!!! -- Puppy Betrayal -- High-Heeled By A Girlfriend Impersonator -- Flip-Top Beheaded -- Because I'm Too Goddamned Beautiful To Live -- By Choosing... Poorly... -- Fried Alive Due To Baby Ingenuity -- A Good Old-Fashioned Tentacle Smothering -- Eepa! Eepa! -- Gremlins Ate My Stairlift -- An Icicle Thru The Eye -- Face Carved Off By Ghost Doctor After Lesbian Tryst With Zombie Women -- Electrocuted By Fallen Power-Lines -- A Mouthful Of Flare -- Taken By The TV Lady -- Bitten By A Zombie -- Eaten By Your Mattress -- Stuffed To Splitting -- Face Stuck In Liquid Nitrogen -- Crushed By Crumbling Church Debris -- Bitten By The Jaws Of Life -- A Machete To The Crotch -- Showering With A Chain-Saw -- In A Room Filled With Razor Wire -- Pod People'd With Your Dog -- Force-Fed Art -- Skinned By A Witch -- Beaten With An Oar -- Curbed -- Cape Malfunction -- In The Corner -- Cooked In A Tanning Bed -- Diced -- Punched Through The Head -- Bugs Sucking On Your Head
.
Who? Jason Adams When? 5:23 PM

I laughed so hard when I saw that GIF of Arbogast falling down those stairs that I split my lip.

Everytime I watch that murder and he goes down the stairs it makes my stomach lurch, like I just crested a hill too fast in my car.

It has this incredible quality of surreality - exactly like a dream I know I've had a million times (I almost said that everyone's had - but who knows what goes on in your head at night!). The floating sensation from the camera moving so smoothly, the horror on his face and the way the moment just lingers.