And so it begins. Not with a bang but with a... well yeah technically in the tiny enclosed world of these things I guess this is indeed a bang. As I stated in our introduction I decided to start out the 2010 Pantys with my top ten list instead of saving it for last. Gotta keep you people on your toes. But first, here are ten films that just missed out on the top ten. Because my middle name is excess. Jason Anya Christina Emmanuella Jenkins Excess Adams.

The Ghost Writer -- A Prophet

How to Train Your Dragon -- I Am Love

Carlos -- The Loved Ones 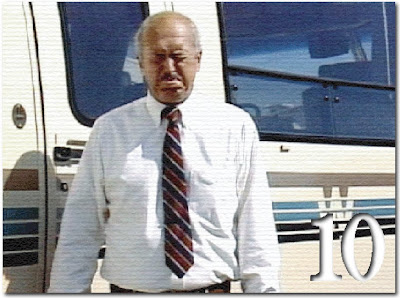 10 Winnebago Man (dir. Ben Steinbauer) - Before watching this documentary I hadn't seen one-time Winnebago salesman Jack Rebney's infamous meltdown, which was a viral video even before YouTube came around (and once YouTube did come around it only gained traction), so it all played out like a revelation for me. But like Best Worst Movie last year (and these two make perfect companion pieces, now that I think of it) Winnebago Man is more concerned with dissecting the modern cult that's attracted to this sort of dubious and small, specific infamy and how that attention can warp the reality of the odd people who find themselves at the center of it. A fascinating look at a fascinating man in a fascinating situation. 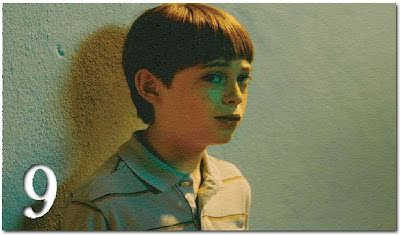 9 Life During Wartime (dir. Todd Solondz) - As the lyrics to the song go, "This ain't no party, this ain't no disco / this ain't no fooling around. / I'd like to kiss you, I'd love you hold you / I ain't got no time for that now." Or as Allison Janney says when her son asks her if she's still wet from her date touching her, "No, I dried myself with a paper towel." (original review) 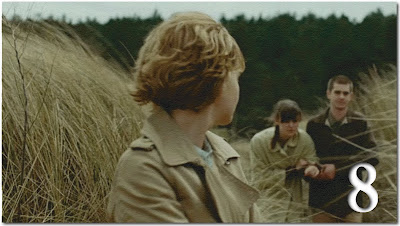 8 Never Let Me Go (dir. Mark Romanek) - What haunts me from this film is what isn't there. It's a film of absences, of lacks. What should be said, what should be done, simply cannot be. It can't be expressed and it wouldn't matter if it was. A profound sense of unfulfillment hangs across it like a shroud. They don't notice the shroud because they were born there under it, they pretend it isn't there, they make teenage mistakes and they look away, even as they start to know. But slowly it smothers their pretenses. Cathy and Tommy and Ruth are always too young. And then the youth starts being sapped away and their young frames droop and fray. And then it is too late, before they've even begun. (original review) 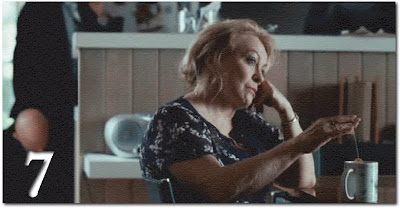 7 Animal Kingdom (dir. David Michôd) - A good thriller is a hard thing to find. A good thriller that makes the tension bunch up so tight in your neck you feel like a jack-in-the-box curled up inside its claustrophobic box just about to burst, even harder. And one that's seemingly so effortless it can make you feel that way by simply showing a car back down a driveway, well it smothers the efforts of a thousand tepid recent attempts at spine-tingling. This is the real deal - crackerjack film-making popping right off the screen, with another about-face ready for you before you've even spotted the first. (original review) 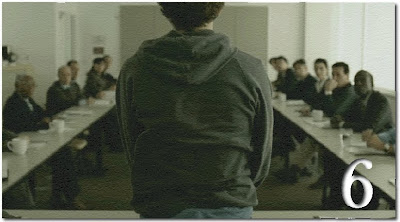 6 The Social Network (dir. David Fincher) - The rat-a-tat-tat rapid-fire of spittin' verbal venom between Jesse Eisenberg and Rooney Mara sucks you in right there at the start, but it was the straight-outta-Riefenstahl (that's like Compton, only with genocidal intent) rowing sequence where the music and the images swelled together into an opera of slashing strokes - the oars through the water, the buttons on the editing bay, the fingers on a laptop - and Fincher's vision carried me away. In the dog-race between the haves and the have-mores, it's the one who figures out how to rewrite the codes of how we see each other that always wins. (original review) 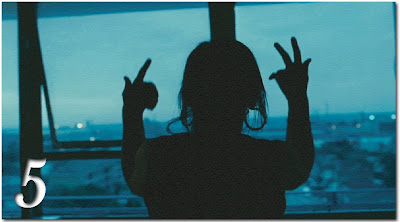 5 Fish Tank (dir. Andrea Arnold) - What's wowed me with Arnold's two films so far is how unflinching she is towards tremendously complicated matters of sexuality that would scare most folks away. She doesn't just not flinch though - she dives right in and looks at it from every angle. In Red Road the main character's self-destructive streak seeks out the worst form of therapy imaginable, and here we have teenage Mia who has no guidance and no idea what to do with all the pent-up energy and power she's discovering. So off it goes into every direction. How are we supposed to feel about what unspools between Mia and her mother's boyfriend? It's not that Arnold doesn't tell us specifically what to think - she just gives us about five thousand answers to that question, and every single one's got a valid argument behind it. (original review) 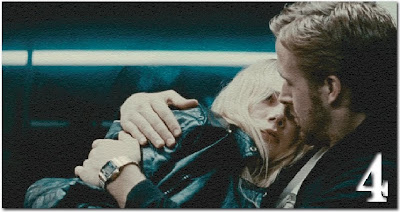 4 Blue Valentine (dir. Derek Cianfrance) - How can something so sad be so simultaneously exhilarating? Blue Valentine makes me feel alive even as it picks me apart on the inside. Perhaps because of how deeply it digs. You're watching two people on fire - two actors burning celluloid right up. And a director capturing it in exquisitely disassembled succession. (original review) 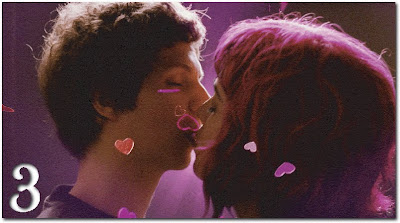 3 Scott Pilgrim Versus the World (dir. Edgar Wright) - It is a very good sign if your enthusiasm feels like a large stone gathering speed as it tumbles down the side of a cliff as your eyes glance down the list of actors and characters that are in a film, every name filling you with more and more glee, until your eyes are bright and filled with tears of joy and you're screaming out lines at yourself, and then the lady in the check-out line is staring at you but she doesn't judge you, no, she screams, "Prepare to die, obviously!" back at you, and you both do a little twirl and smile and the day is bright and beautiful and brimming with possibilities. Edgar Wright improved possibilities. That's right - Edgar Wright's movies make living life better. It's a totally undisputed fact. (original review) 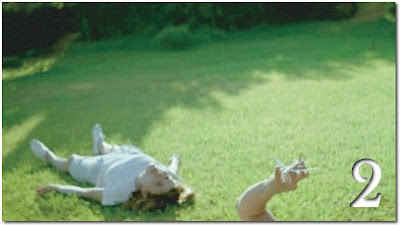 2 Dogtooth (dir. Giorgos Lanthimos) - In a way Dogtooth feels like a science-fiction film - we've been dropped into another world here, and these people's customs are not our own. Perhaps it's an alternate dimension, because they're similar enough to ours. But different. And their language isn't our language. Not just that the characters speak Greek - they're actually actively redefining words, for some unknown purpose. Only the more you watch, it seems the less you understand. Definitions roll backwards, away from us - things make less sense the longer you stare at them. The film's like a riddle - an entirely unknowable thing I never want to stop knowing. (original review) 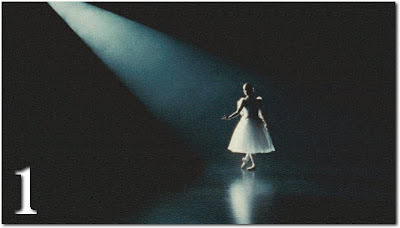 1 Black Swan (dir. Darren Aronofsky) - The only way I've really been able to express to people who've asked me what I thought of Black Swan is to say it sums up why I go to the movies. It enthralls me. It wraps up my wants and needs and loves - The passion! The beauty! The stabbings! - and the things I never knew I needed or wanted until Darren Aronofsky told me I wanted and needed them - A sloshed Winona Ryder spitting the word "cock"! Benjamin Millipied's tights! It's insane and operatic and ridiculous and beautiful. As Thomas keeps reminding Nina, over and over and over again, you can't be a coward. You've got to lose yourself, dance right off the edge. And nobody can fault Aronofsky for cowardice. Black Swan pours gasoline over its head and leaps headfirst into the fiery bowels of hell-flame. And it it glorious. I would so fuck that girl. (original review)

Well there you go. There's that. Now over the course of the next couple of days we'll be moving on to a look at my favorite performances, my favorite horror films, my favorite gratuities... you know the usual junk, spiced up with my usual nonsense. Stay tuned!
.
Who? Jason Adams When? 12:55 PM

We don't agree on a whole lot of these, but I couldn't give two shits when your explanations are so eloquently written. I love reading Top 10 lists where the author has clearly picked movies that meant the most to them over the past year rather than becoming a slave to "good taste" and critical darlings that they feel they should love. Scott Pilgrim was far from my favorite film of the year, but I love that you love it so much and that you defend it every chance you get. Congrats on this fun, clever and unique list!

Thanks DJ! That's much appreciated, I shovel a lot of heart into these lists - generally I hate making lists and find them a terrible ordeal, so I have to go with shit that stirs some real passion in me. If I had to try and force myself to write something up about The King's Speech or True Grit or some similar other awards-horse that doesn't do much for me I'd lose my mind. It's actually why the list is just a top 10 this year - there wasn't as much that I was super-passionate about in 2010 as there was in 2009, where I gave a fully written-out top 20. I like the films in my runners-up list, a couple of them very much and on another day things might shift around a little bit, but mostly my passions were narrower this year.

I was going to say nasty things about Blue Valentine [saw it last night and hated it], but now I feel bad. Sorry to disagree, thanks for all your effort!

I'm loving what you're doing with the golden pants this year. Can't wait for it ALL.