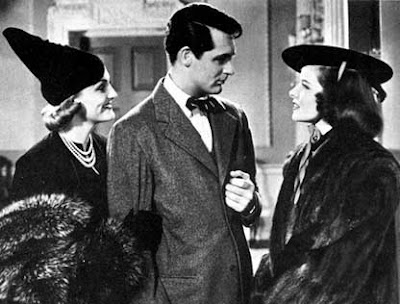 Johnny Case (Cary Grant): When I find myself in a position
like this, I ask myself: What would General Motors do?
And then I do the opposite!

Today would've been Cary Grant's 107th birthday. I watched George Cukor's Holiday last Summer and it immediately cemented itself as one of my favorite movies of Grant's. And Hepburn's. And Cukor's, and in general. It's a wonderful film, and I wish I'd seen it sooner. Here's a tidbit I found amusing from the movie's Wiki:

"Although the film was not a financial success, it was well-received by critics. Hepburn biographers have speculated that Johnny Case's plans to give up working did not appeal to Great Depression audiences who were struggling to find jobs."

You know what I wouldn't have liked if I were struggling to put food on the table? Shirley goddamned Temple screeching my face, but I guess that's just me.
.
Who? Jason Adams When? 2:21 PM