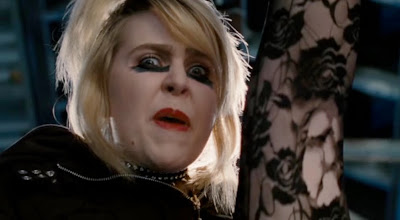 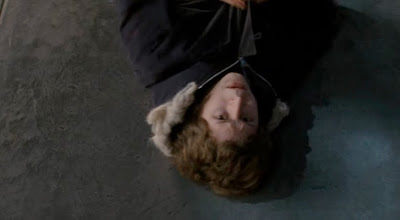 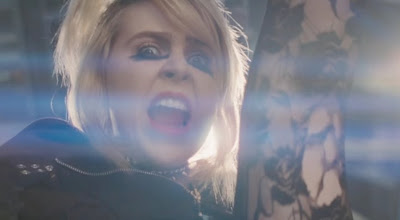 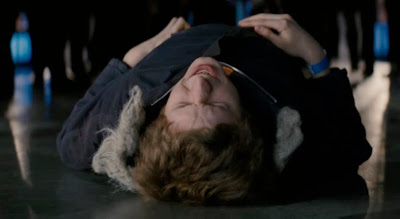 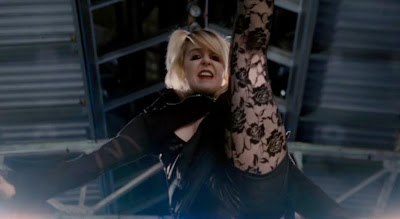 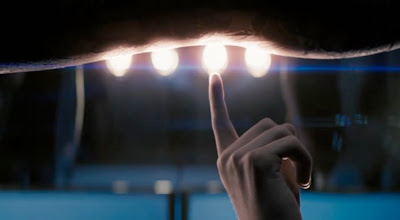 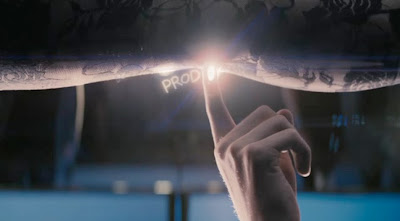 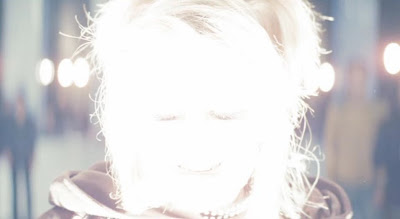 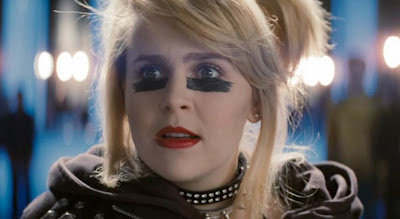 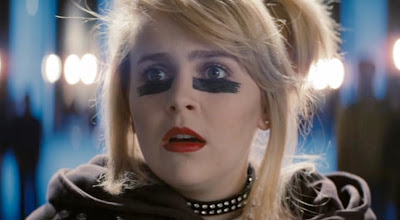 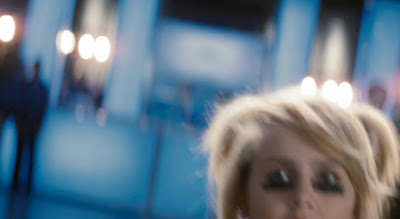 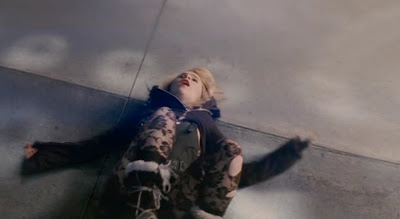 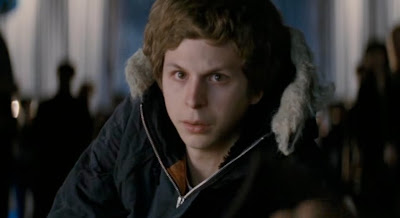 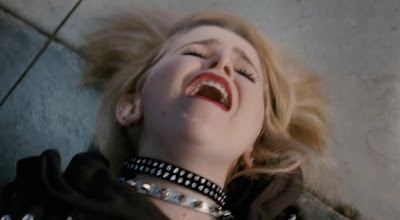 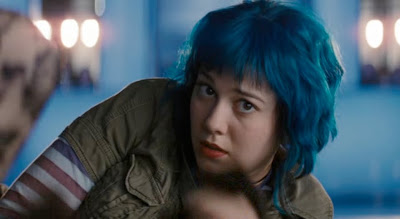 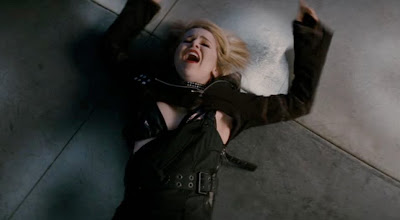 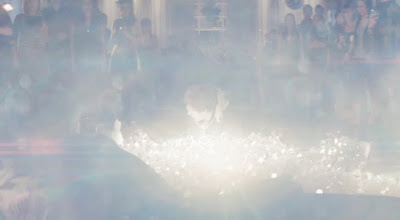 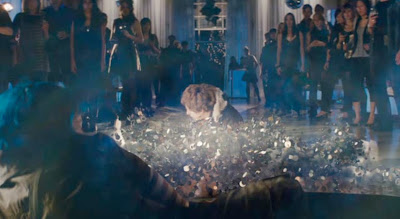 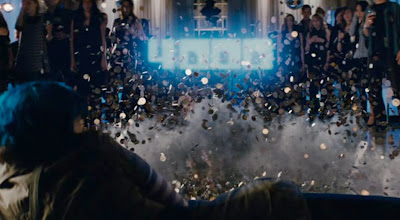 Scott Pilgrim Vs. The World (2010)
Alright, so this actually isn't a bad way to die. In fact it'd actually be, I do think, the best way to die I've ever featured in this series. What a way to go. Orgasms for everybody!

Which brings me to my second point, which is I find the complaint that I've seen around about the treatment of Mae Whitman's character Roxy Richter being homophobic a whole lotta bullhockey. To look at this scene and see it as a validation of the "Lesbians just need a good man!" myth indicates to me a pathological need to wring all humor and imagination from life itself. (Hyperbole what?)

I think the best reading of every single moment of Scott Pilgrim is through the seriously skewed lens of Scott Pilgrim's point of view. His battles with these exes are just about as real as Walter Mitty's fantasies - when he envisions Lucas Lee (Chris Evans) exploding in a giant skateboarding fury of fireball, of course he sees Lucas Lee explode in a giant skateboarding fury of fireball! Lucas Lee is a tough-ass skateboarding movie star, and that's how he would go according to Scott. His massive ego would do him in. Likewise Scott would envision Todd Ingram (Brandon Routh) being carted away by the Vegan Police for some lame Vegan slip-up, and beating the big-shot electronica Katayanagi twins with his little guitar. 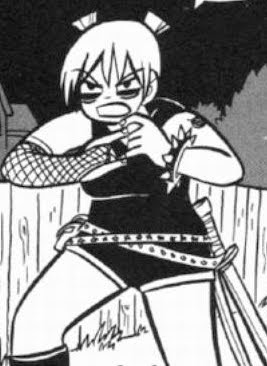 And when Scott Pilgrim looks at his current paramour's girl-on-girl past he's blinded by it as "a sexy phase" and sees his "battle" over that part of Ramona's past as a contest of sexuality. As Roxy dies she screams out that Scott will never fulfill Ramona sexually, and honestly, knowing that your ex once dabbled in different sexy shenanigans than you can ever offer is always gonna raise such alarms for anybody, from where I stand. Will she go back to her ladies-loving-ladies ways? That's the panic that finding out this part of Ramona's history is naturally going to bring up for Scott, and triumphing via sexual satisfaction is, from my point of view, a brilliant way to play with that.

Not to mention that Mae Whitman, amongst a cast of stand-outs, stands the fuck out with the funniest performance in the whole film, her every single line one I'll be uttering until I drive my friends away with annoyance. Hasbian! You punched me in the boob! Prepare to die, obviously!

--------------------------------------
Previous Ways Not To Die: Dare to Dream in Fincher -- Reach Out and Throttle Someone -- De-Faced -- Voluntary Drowning -- Cross Borne -- Pulled Up Hell's Sphincter -- An Arrow Up The Ass - The Numerous Violent Unbecomings of Olive Oyl -- Ack! Ack! Zap! -- Baby's First Acid Splash -- Chop, Drop and Sashimi Roll -- Forever Rafter -- Can't You Hear Me Now? -- Daisies Ways #5 - Harpoony Side Up -- Acid Dip -- On a Wing and a Prey -- For Standing in the Way of Sappho -- Busting Rule Number Three (For The Purpose of Number Two) -- Daisies #4 - Window Dressed To Killed -- Hands Off the Haas Orb -- Bullet Ballet -- A Single Vacancy at the Roach Motel -- A School Bus Slipped Thru The Ice -- Trache-AAHHHH!!!-tomy'd - For Mel Gibson's Sins -- A Wide Stanced Slashing --- Daisies Ways #3 - Scratch n' Snuffed -- The Victim of a Viscous Hit & Run -- Curled -- Kabobbed -- Daisies Ways #2 - Aggravated Cementia -- Boo! Nun! -- 2009's Ways Not To Die -- Bug Scratch Fever -- Daisies Ways #1 - Deep Fat Fried in My Own Unique Blend of 500 Herbs & Spices -- By the Yard End of the Stick -- Screwed From A Very Great Distance -- A Righteous Bear-Jew Beatdown -- Fisted By Hugo Sitglitz -- Xeno Morphed -- Fuck-Stuck -- A Vengeful Elevator God: Part 4 -- Lava Bombed -- The Cradle Will Rock... Your Face Off!!! -- The Food of the Nilbog Goblins -- The Slugs Is Gonna Gitcha -- Phone Shark -- Hide The Carrot -- Sarlacc Snacked -- Avada Kedavra!!! -- Hooked, Lined and Sinkered -- "The Libyans!" -- Axe Me No Questions -- Pin the Chainsaw on the Prostitute -- The Wrath of the Crystal Unicorn -- The Ultimate Extreme Make-Over -- Drown In A Sink Before The Opening Credits Even Roll -- The Dog Who Knew Too Much -- Don't Die Over Spilled Milk -- Inviting the Wrath of Aguirre -- An Inconceivable Outwitting -- The Five Point Palm Exploding Heart Technique -- Nipple Injected Blue Junk -- Your Pick Of The Deadly Six -- Thing Hungry -- Don't Fuck With The Serial Killer's Daughter -- DO Forget To Add The Fabric Softener -- Any Of The Ways Depicted In This Masterpiece Of Lost Cinema -- Rode Down In The Friscalating Dusklight -- Good Morning, Sunshine! -- Mornin' Cuppa Drano -- The Cylon-Engineered Apocalypse -- Tender-Eye-zed -- Martian Atmospheric Asphyxiation -- Maimed By A Mystical Person-Cat -- The Sheets Are Not To Be Trusted -- Handicapable Face-Hacked -- I Did It For You, Faramir -- Summertime In The Park... Of A Pedophile's Mind -- A Vengeful Elevator God: Part 3 -- Strung Up With Festive Holiday Bulbs By Santa Claus Himself -- A Vengeful Elevator God: Part 2 -- A Vengeful Elevator God: Part 1 -- Decapitated Plucked Broiled & Sliced -- Head On A Stick! -- A Trip To The Ol' Wood-Chipper -- Pointed By The T-1000 -- Sucking Face With Freddy Krueger -- A Pen-Full Of Home-Brewed Speed to The Eye -- Motivational Speech, Interrupted -- A Freak Ephemera Storm -- When Ya Gotta Go... Ya Gotta Go -- Hoisted By Your Own Hand Grenade -- Having The Years Suction-Cupped Away -- Criss-Cross -- Turned Into A Person-Cocoon By The Touch Of A Little Girl's Mirror Doppleganger -- Satisfying Society's "Pop Princess" Blood-Lust -- Done In By The Doggie Door -- Tuned Out -- Taking the 107th Step -- Rescuing Gretchen -- Incinerated By Lousy Dialogue -- Starred & Striped Forever -- Vivisection Via Vaginally-Minded Barbed-Wire -- Chompers (Down There) -- Run Down By M. Night Shyamalan -- Everything Up To And Including The Kitchen Toaster -- Sacrificed To Kali -- Via The Gargantuan Venom Of The Black Mamba Snake -- Turned Into An Evil Robot -- The Out-Of-Nowhere Careening Vehicle Splat -- "Oh My God... It's Dip!!!" -- Critter Balled -- Stuff'd -- A Hot-Air Balloon Ride... Straight To Hell!!! -- Puppy Betrayal -- High-Heeled By A Girlfriend Impersonator -- Flip-Top Beheaded -- Because I'm Too Goddamned Beautiful To Live -- By Choosing... Poorly... -- Fried Alive Due To Baby Ingenuity -- A Good Old-Fashioned Tentacle Smothering -- Eepa! Eepa! -- Gremlins Ate My Stairlift -- An Icicle Thru The Eye -- Face Carved Off By Ghost Doctor After Lesbian Tryst With Zombie Women -- Electrocuted By Fallen Power-Lines -- A Mouthful Of Flare -- Taken By The TV Lady -- Bitten By A Zombie -- Eaten By Your Mattress -- Stuffed To Splitting -- Face Stuck In Liquid Nitrogen -- Crushed By Crumbling Church Debris -- Bitten By The Jaws Of Life -- A Machete To The Crotch -- Showering With A Chain-Saw -- In A Room Filled With Razor Wire -- Pod People'd With Your Dog -- Force-Fed Art -- Skinned By A Witch -- Beaten With An Oar -- Curbed -- Cape Malfunction -- In The Corner -- Cooked In A Tanning Bed -- Diced -- Punched Through The Head -- Bugs Sucking On Your Head
..
Who? Jason Adams When? 1:11 PM

Mae Whitman was the best! Ahhh. My favorite line in the whole movie: "well I'm BI FURIOUS!!!!" But your argument is so right as well. In a way, it was a very interesting and inspired choice and you're right, the entire movie is being told from Scott's point of view!

I didn't find this scene homophobic, I found it sexist. of course the woman is brought down by a erogenous zone! Seen through the eyes of Scott Pilgrim? I'll buy that, but there's no way in hell that they would've allowed Ramona to tell Scott during a fight where his male opponent has an erogenous zone. No way. She gets punished by sex, basically.

That's how I saw it, anyway.

I can't really argue with that, Glenn, except to say that Scott Pilgrim himself is a sexist character, and since the film's from his POV of course this scene's sexist. And I think it's trumped by how hysterically funny Mae Whitman is - she makes the caricature that Scott has turned her into something much bigger and bolder, as far as I see it. But your mileage may vary, obviously. ;)

But to paraphrase someone I read recently, I can't find the exact quote but I think it was in reference to The Social Network, the POV of sexists is a little overrepresented in our culture, so frustration with that's certainly warranted. But I think this film criticizes Scott pretty thoroughly and really just adores its lady characters.