I'd Give My Left Arm For More Lizzy 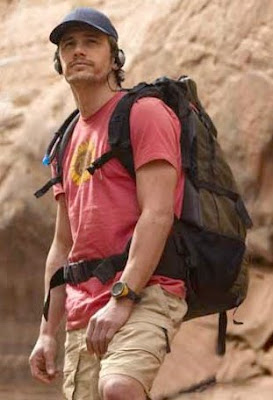 That's not meant as a swipe at the film so much because I liked the film a lot. But I wouldn't say I loved it. James Franco is very very good - that's twice this year; he's due his nomination, Academy - and the film's very attractive to look at. But I found myself feeling emotionally removed from the film for most of it. There was something, perhaps Boyle's frantic need to amp up the adrenaline of it all in an attempt to keep us engaged in a film about a solitary single character, that kept me at arm's length. Style was trumping, stampeding, substance.

Until the end, where Boyle rights the ship and brings it in. Those final ten minutes or so packed an emotional wallop I wasn't expecting at all, feeling as I did for what preceded them. Maybe it's that it comes in the wake of something so viscerally realized as the cutting through of one's own arm. Maybe it's that Boyle makes that moment so real, so awful and sickening and overwhelming, that it's impossible to not get sucked right into the moment at that point. The way Franco falls backwards before you even realize what's happened, and there it is, the arm is off. There's real shock captured there, a dizzying sense of whatthehelljusthappened, that's a true accomplishment when you think about the fact that that moment is the money-shot we've all been expecting the entire movie. 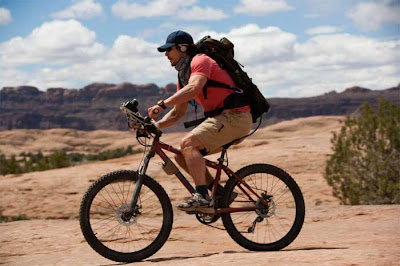 It's what the story's about, it's the selling point, and Boyle made what we all came to experience retain a sense of horrible surprise. You know Ralston survives, you know he gets the arm off, and yet those final few minutes of the film really truly got me. Not that I thought Boyle would change the ending, but that he made something we already know all about going in feel so alive. It could've been a freeze-dried turd like Apollo 13, but it wasn't, is my point.

So anyway it's a definite step back up in my estimation for Danny Boyle after Slumcrap Crapionnaire. Good on ya, Danny. 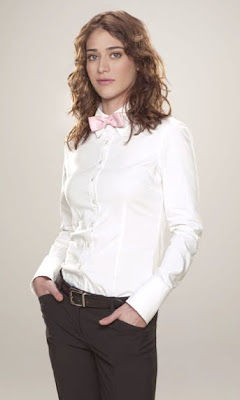 All that aside - and I did just end up reviewing it far more than I anticipated - what I really wanted to make mention of right now is what the hell was the deal with Lizzy Caplan showing up for five seconds? I wish I could find a frame of her from the film to share here because that frame would literally be her entire role. I know that, to the world's shame, the world isn't eaten up with Lizzy Caplan devotion and probably only finds the sight of her vaguely familiar, but I was all, hey! Rewind that! I want to see more Lizzy! But no, she sits on his dream couch in a wedding dress and then poof gone. It sent me off on this whole train of thought about how I guess it looks good for this movie to be on her resume and then I thought about how maybe some of it got left on the cutting room floor and then it made me think of how Lizzy's character Casey in Party Down was cut out of the Judd Apatow movie she was all excited about and so I started thinking about how much I think that Lizzy and Casey are probably a lot alike and then James Franco's arm fell off and I was all woah, and cried, the end.
.
Who? Jason Adams When? 4:42 PM

I can't wait to watch 127 Hours, but I am deeply saddened by the smallness of Lizzy Caplan's role. To be honest, she was kind of the most enticing aspect of the movie to me. Awwww.

I agree with your assesment of the film and of it's ending. I actually wondered if I had not known what the film was about, if I had not been simply waiting for the "moment" if I would have been more engaged. But of course I'll never know since everyone knows what the movie is about.

Saw the film this weekend and I loved it. Still can't get over it. My friend who I saw it with though, I guess, completely forgot about the whole hand hacking thing until minutes before it happened. To see the horror on her face was a bit priceless.

And yes to more Lizzy Caplan!