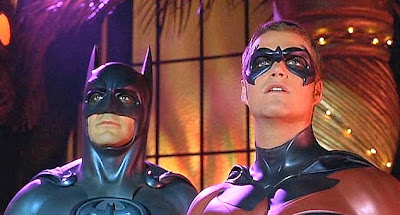 "It's a poisonous kiss."

two of my favorite stills from the film. because they both look like they're taken from some elementary school play. like, those leaves.... they look like a five-year old made them in art class. i really have to watch this again. my first reaction was anger and it's been that way since. but over the years, i'm sort of embracing the bright, neon pink of the film.

LOL...truly bad set design...and Alicia Silverstone's Batgirl turn...YIKES...how hard would it be to pull off a half-decent Batgirl performance. On the plus side, I have a real soft spot for Chris O'Donnell from this era (or a real hard spot, depending on how one wishes to characterize it ;o), and these movies did involve putting him in a superhero costume...

There is something truly wonderfully awful about B&R that's never stopped being amusing after all these years. It just fails on so many levels in such impressive ways! But in its defense I end up quoting this one nearly as much as I do Batman Returns, the eternally most quotable of all Batman movies, so it has that going on. I mean all of Arnold's puns just never stop being awesome. I don't know how many times in my life I've uttered in his distinctive accent, "ICE to meet you." and then laughed for five minutes straight. It's the small things.

As a boy, I basically think that Chris O'Donnell turned me gay, so I always have fond memories of this movie, even if it's stupid.