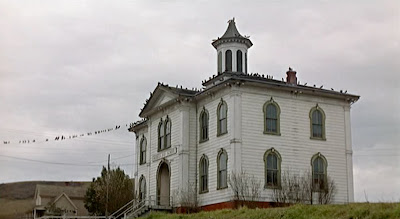 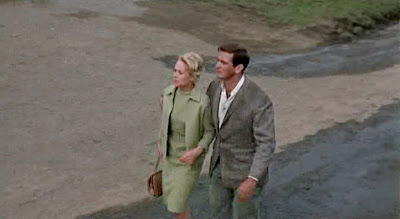 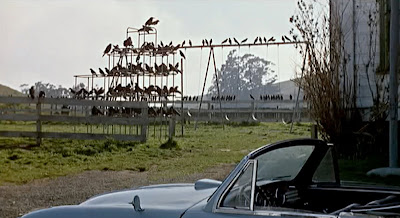 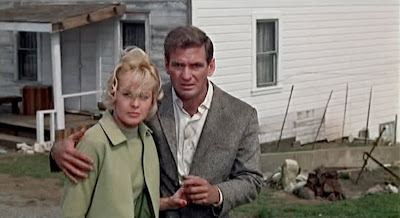 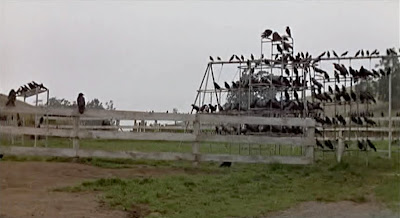 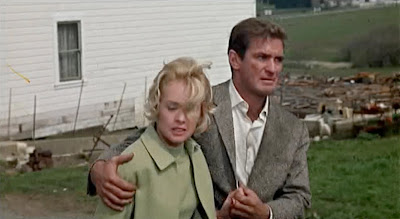 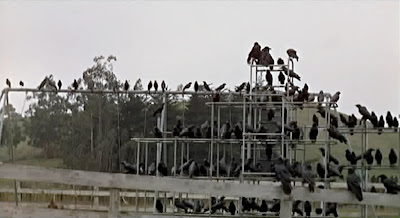 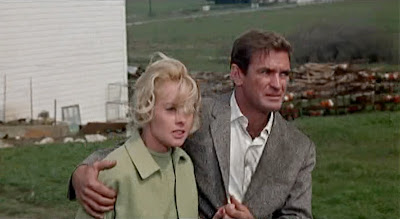 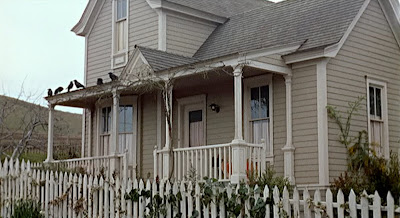 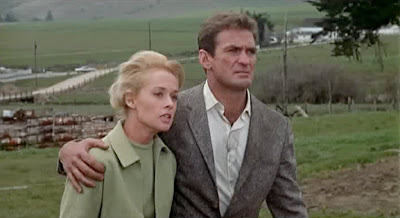 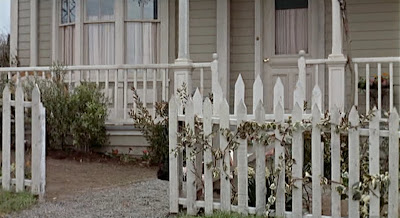 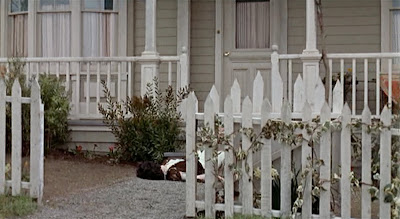 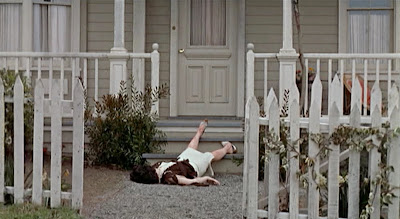 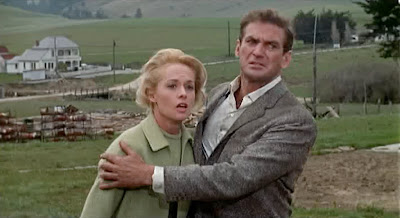 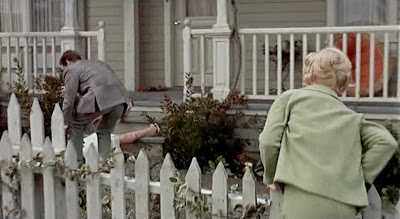 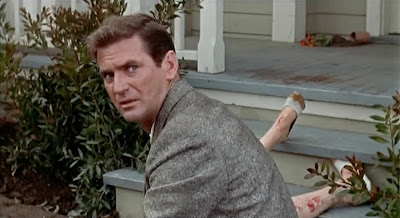 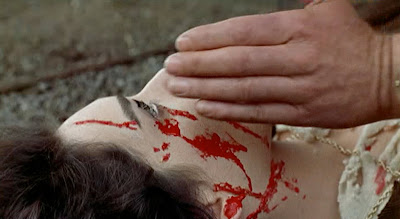 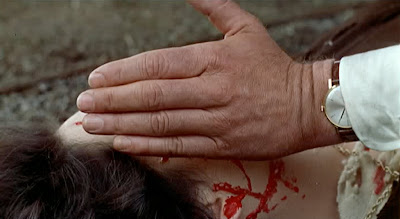 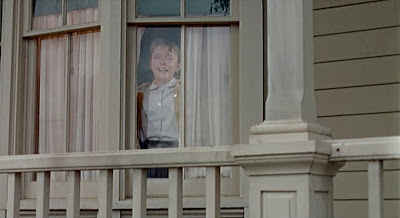 The Birds (1963)
Dear readers, I apologize - this is two weeks in a row that I've focused in on deaths scenes in films whose accumulative effect is immense sadness. We'll have to do something fun and silly next. But for now, RIP Annie Hayworth. You were too damn good for Mama's Boy Mitch anyhow. 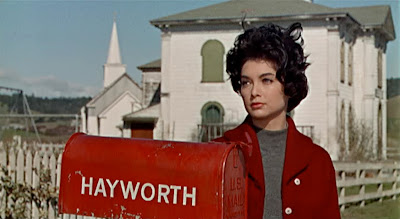 This is one of the classic Hitch bait-and-switch scenes, where he hits us with something awful in a completely surprising way. Oh we know that Annie's standing in the way of the film's true lovebirds Melanie and Mitch, so by the cruel laws of story-telling she'll have to be eliminated in one way or another in order for the happy two-some to walk into their (what turns out to be dark and bloody and bird-infested) sunset together. But every time I watch the film this moment, the way it's delivered to us, hits me hard.

See right before this we've witnessed the biggest bird assault yet. The camera even adopted the (ahem) bird's eye view to set the scene. 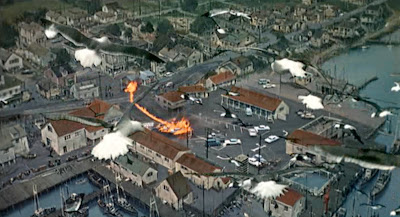 Cars exploded! People exploded! Fire and mayhem and horror everywhere! After all this, the birds have left and we've got our lull. A lot has been written about the poem-like structure of this movie's screenplay - the rhythm between small human scenes and big bird attacks - and we've been trained by this point, with the birds having just pulled back, to think we're having a moment of peace. Mitch and Melanie head up to Annie's to get Mitch's sister Cathy (Veronica Cartwright just starting her career of totally freaking out so beautifully) and Hitch shows us the crows are gathered around the school again. This is only a couple scenes after the infamous scene of the crows attacking the children at the school, so needless to say we're still wary of their crows' presence there at the school. 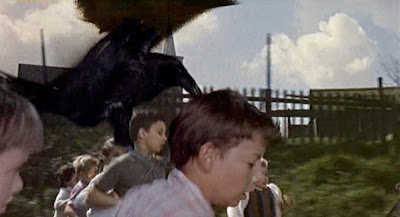 Hitch cuts back and forth like a magician slipping cards up his sleeve, showing us the crows, showing us Mitch and Melanie, so all we're thinking is, "Don't make a sound, you fools! Be quiet or they'll get you!"

But that horror, like Annie, is only a ghost in this moment. We are stumbling upon it, already done. The way Hitch's camera glides passed the dingy white picket fence - the way his camera glides around this entire film is a glorious treasure to watch - and reveals her body, slowly through the posts, and it dawns on you what you're seeing as you spy her dress, her jet black hair, her legs splayed on the stairs in a horrible jumble, her sad schoolmarm heels...

So basically I consider this to be one of the saddest death scenes ever put on film. It might be an obvious choice amongst the legions of dead in cinema but Annie Hayworth would rank pretty damn high for me on the list of "The One I Would've Saved" for that ongoing blogathon at Arbogast's. Poor Annie.

I'm curious to hear people's theories about Annie if anyone has one, by the way. I've never bought the "repressed lesbian" thing that's been put on her by some people, but I get where it's coming from. Lonely spinstery old maid schoolmarm pining for a man she'll never have again and obsessed with his mother... and she and Melanie do share an especially long moment lingering at the door of her house... 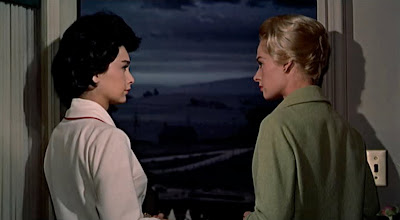 --------------------------------------
Previous Ways Not To Die: For Standing in the Way of Sappho -- Busting Rule Number Three (For The Purpose of Number Two) -- Daisies #4 - Window Dressed To Killed -- Hands Off the Haas Orb -- Bullet Ballet -- A Single Vacancy at the Roach Motel -- A School Bus Slipped Thru The Ice -- Trache-AAHHHH!!!-tomy'd - For Mel Gibson's Sins -- A Wide Stanced Slashing --- Daisies Ways #3 - Scratch n' Snuffed -- The Victim of a Viscous Hit & Run -- Curled -- Kabobbed -- Daisies Ways #2 - Aggravated Cementia -- Boo! Nun! -- 2009's Ways Not To Die -- Bug Scratch Fever -- Daisies Ways #1 - Deep Fat Fried in My Own Unique Blend of 500 Herbs & Spices -- By the Yard End of the Stick -- Screwed From A Very Great Distance -- A Righteous Bear-Jew Beatdown -- Fisted By Hugo Sitglitz -- Xeno Morphed -- Fuck-Stuck -- A Vengeful Elevator God: Part 4 -- Lava Bombed -- The Cradle Will Rock... Your Face Off!!! -- The Food of the Nilbog Goblins -- The Slugs Is Gonna Gitcha -- Phone Shark -- Hide The Carrot -- Sarlacc Snacked -- Avada Kedavra!!! -- Hooked, Lined and Sinkered -- "The Libyans!" -- Axe Me No Questions -- Pin the Chainsaw on the Prostitute -- The Wrath of the Crystal Unicorn -- The Ultimate Extreme Make-Over -- Drown In A Sink Before The Opening Credits Even Roll -- The Dog Who Knew Too Much -- Don't Die Over Spilled Milk -- Inviting the Wrath of Aguirre -- An Inconceivable Outwitting -- The Five Point Palm Exploding Heart Technique -- Nipple Injected Blue Junk -- Your Pick Of The Deadly Six -- Thing Hungry -- Don't Fuck With The Serial Killer's Daughter -- DO Forget To Add The Fabric Softener -- Any Of The Ways Depicted In This Masterpiece Of Lost Cinema -- Rode Down In The Friscalating Dusklight -- Good Morning, Sunshine! -- Mornin' Cuppa Drano -- The Cylon-Engineered Apocalypse -- Tender-Eye-zed -- Martian Atmospheric Asphyxiation -- Maimed By A Mystical Person-Cat -- The Sheets Are Not To Be Trusted -- Handicapable Face-Hacked -- I Did It For You, Faramir -- Summertime In The Park... Of A Pedophile's Mind -- A Vengeful Elevator God: Part 3 -- Strung Up With Festive Holiday Bulbs By Santa Claus Himself -- A Vengeful Elevator God: Part 2 -- A Vengeful Elevator God: Part 1 -- Decapitated Plucked Broiled & Sliced -- Head On A Stick! -- A Trip To The Ol' Wood-Chipper -- Pointed By The T-1000 -- Sucking Face With Freddy Krueger -- A Pen-Full Of Home-Brewed Speed to The Eye -- Motivational Speech, Interrupted -- A Freak Ephemera Storm -- When Ya Gotta Go... Ya Gotta Go -- Hoisted By Your Own Hand Grenade -- Having The Years Suction-Cupped Away -- Criss-Cross -- Turned Into A Person-Cocoon By The Touch Of A Little Girl's Mirror Doppleganger -- Satisfying Society's "Pop Princess" Blood-Lust -- Done In By The Doggie Door -- Tuned Out -- Taking the 107th Step -- Rescuing Gretchen -- Incinerated By Lousy Dialogue -- Starred & Striped Forever -- Vivisection Via Vaginally-Minded Barbed-Wire -- Chompers (Down There) -- Run Down By M. Night Shyamalan -- Everything Up To And Including The Kitchen Toaster -- Sacrificed To Kali -- Via The Gargantuan Venom Of The Black Mamba Snake -- Turned Into An Evil Robot -- The Out-Of-Nowhere Careening Vehicle Splat -- "Oh My God... It's Dip!!!" -- Critter Balled -- Stuff'd -- A Hot-Air Balloon Ride... Straight To Hell!!! -- Puppy Betrayal -- High-Heeled By A Girlfriend Impersonator -- Flip-Top Beheaded -- Because I'm Too Goddamned Beautiful To Live -- By Choosing... Poorly... -- Fried Alive Due To Baby Ingenuity -- A Good Old-Fashioned Tentacle Smothering -- Eepa! Eepa! -- Gremlins Ate My Stairlift -- An Icicle Thru The Eye -- Face Carved Off By Ghost Doctor After Lesbian Tryst With Zombie Women -- Electrocuted By Fallen Power-Lines -- A Mouthful Of Flare -- Taken By The TV Lady -- Bitten By A Zombie -- Eaten By Your Mattress -- Stuffed To Splitting -- Face Stuck In Liquid Nitrogen -- Crushed By Crumbling Church Debris -- Bitten By The Jaws Of Life -- A Machete To The Crotch -- Showering With A Chain-Saw -- In A Room Filled With Razor Wire -- Pod People'd With Your Dog -- Force-Fed Art -- Skinned By A Witch -- Beaten With An Oar -- Curbed -- Cape Malfunction -- In The Corner -- Cooked In A Tanning Bed -- Diced -- Punched Through The Head -- Bugs Sucking On Your Head
.
Who? Jason Adams When? 12:59 PM

Saying that Annie is a closet case is playing into the Hitch view of women. In his world, because she is not blond she is not sexually valid. The only role she can serve is as another worshiper of the light haired princess. Annie was pretty strong, if she liked the ladies she wouldn't have had to fake an attraction to the mama's boy

I think the thing about Annie is that she was "fated". She accepted her fate to never be Mitch's partner, settling for being near him. Was she fated to die? You noted in your post that story requirements dictated she had be be "gotten rid of". It seems to me that fate is one of the themes of The Birds, a film that's got a lot of layers, especially given that a lot of people read religious allegories into it. Suzanne Pleshette was note-perfect as Annie, and the way that Hitchcock framed her in several scenes, isolating her, serves to give her death more impact. A lesbian, no; she WAS in love with Mitch. But her raspy voice, her "confirmed bachelorette" status, and her independent nature makes a gay read interesting, though I think, wrong.

Well said, dave s, and I totally agree with all you said.

Ah, so I have seen The Birds on many occasions, but was much younger then. I am watching it again now, as an out lesbian and my first thought was what is UP with these same-sex sexual glances. It all seems very lesbian-esque. I decided to go on a search and it seems MANY other people have noticed this as well. Glad to see its a valid argument and I am not the only one who thinks it!