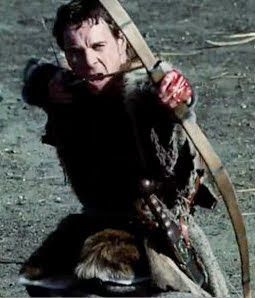 I went into Centurion last night with my friend Sean's Manly Movie Mamajama series on my brain, and ended up judging it by those exacting standards. As such, it's pretty successful. Michael Fassbender's Roman soldier goes by the manly nom de guerre Quintas Dias. People get shot with arrows in the back of the head. Dick jokes are made repeatedly. Check, check, check.

There's a slow patch in the middle where about five times in a row we watch fierce she-wolf Etain almost catch our heroes, they barely escape, their numbers thinned a little each time, that grows redundant. And there are way too many Lord of the Rings style "helicopter swooping over our heroes walking through mountain passes" shots crammed in between.

But with Marshall these always somehow feel like knowing winks - not in an obnoxious way either - and there's one panoramic shot of our heroes popping up groundhog-like from behind a hilltop that's got to be a straight-up gag. So I think it's safe to say he's having fun with us. You get the feeling watching this - or Doomsday or Dog Soldiers or (most successfully) The Descent for that matter - that Marshall's tapping straight into his own id, spilling out fun junk he's always wanted to see. It ain't art - although some of it's very pretty to look at - but it is entertainment. 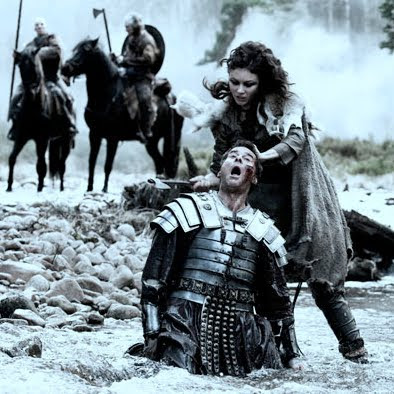 The movie gets better as it stomps along, and the last half an hour or so is fairly rollicking. And not that I'll ever utter words to the contrary, but Fassbender makes for a captivating hero. He clenches hiw jaw like a titan.

It's nothing new - although there were some things I'd never seen before, hello hot stomach stew - and you've got to be in the right mood for it. But I was, and I found myself fighting the urge to shake a manly fist at the screen and growl a deeply manly growl. Testosterriffic!
.
Who? Jason Adams When? 12:30 PM

Saw Centurion at the Seattle International Film Festival a few weeks ago and loved it.
I don't know why it's not getting more press? I hadn't heard anything about it before the festival (except maybe reading about it here on your site?), and during SIFF it was barely promoted. And in these past weeks I've been telling people about it and not even my film nerds have heard much about it.