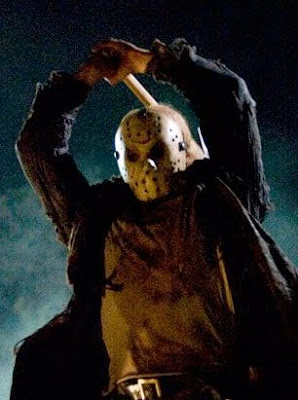 --- Oh My God They Killed Jason - You bastards! Actually if this means that Platinum Dunes and producer Brad Fuller and his crew don't get to ruin Jason Voorhees anymore like they did with last year's Friday the 13th reboot, I don't mind this news a bit. BD has word that for the time being a sequel to that heap of dung is as dead as a camp counselor in the rain. "Right now there is no movement on Friday 13th: Part 2," goes the quote, and let's hope it stays that way until somebody with half a brain can get their hands on the property. Stayin' optimistic about the Elm Street reboot, I am! Obviously. Sigh. 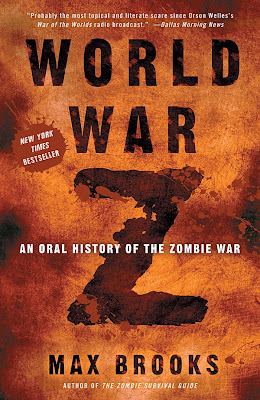 --- Z Is For Zombie - DH has got some word on where the adaptation of World War Z stands, and the news is slightly better than you'd think, since it's been so quiet on that front for so long. Can you believe I still haven't read this book though? I've had it since it came out and it just sits there, staring at me forlornly. I am looking for something to pick up right now actually, so perhaps your day has come, World War Z! Lucky lucky you. 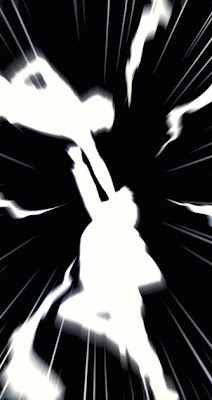 --- TMSPI - In my on-going effort to annoy anyone with only a slight interest in Scott Pilgrim and not the insane amounts I have and drive only but the most avid fans away from the film in droves, here's today's tidbit of information: it got rated PG-13 for "stylized violence, sexual content, language and drug references." Ain't ya glad you know?

--- This Sounds Stupid - Over at BD they've got news on a gimmicky new picture:

"Bloody Disgusting has learned that Darren Lynn Bousman will be getting behind the camera for what could be one of the most insanely bloody films of all time. Entitled Ninety, the story by Scott Milam follows a serial killer who sets out to kill a total of 90 people in 90 minutes. The goal? Bloody revenge! "Ninety is a tense, fun, crazy ride where you just sit back and enjoy the carnage," Bousman tells BD, "And there's a shit ton of carnage."

Mmm shit ton! It's probably just the fact that it's Darren Lynn Bousman selling this and I've found everything he's put to film excruciatingly awful; if it were a director I liked this would probably sound right up my alley. But honestly I just don't know. I mean this just sounds pointless, like one of those YouTube videos where they gather together every single kill from the Friday the 13th series or something - oh it's fun for a bit but 90 straight minutes of this? Will there actually be any story involved? It sounds exhausting, and depressing, and this is me saying this! I revel in cinematic slaughter! Course BD calls this idea "horror bliss" so what do I know... What do I know?
.
poll by twiigs.com
.

--- Piranha From Planet Popcorn - BD collected some quotes from Adam Scott, star of Party Down - and pictured naked there to the right because why not? - which returns this Friday (hooray!), who's on the chat circuit for the return of that show but also answering questions about Piranha 3D, which he is also in, end of run-on sentence. Choice quote:

"I love watching stupid shit. I think Piranha won’t be in the guilty-pleasure category, because it’s gonna be—well, yeah, maybe for some people. From what I’ve seen, it has a sense of humor about itself, and it’s also really scary and really, really violent. I would call it a popcorn movie from the planet Popcorn. It’s just all boobs, blood, and—I don’t know, what’s the other “b”? Barbecue."

I know he's trying to say this movie won't be "stupid shit" but come on, man. It's gonna be awesome stupid shit! (Fingers crossed.) They also have a new pic of that fat kid from Stand By Me in some piranha water: 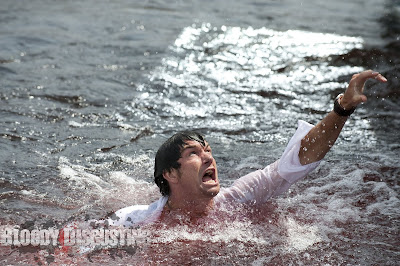 hmm. what movie is that pic from ? beautiful!

I'm guessing you're asking about the shot of naked Adam Scott, right? That's from some movie called The Vicious Kind , which I've never heard of or seen, save his nakedness within. I do have a huge crush on Mr. Scott these days though. He's adorable.

OMG that's where it's from?! He got an Spirit nom for it. And now I HAAAAAAAAAAAAAAVE to see it.

God I lust after him so damn much.

I would strongly recommend finally reading World War Z. You could tear through it pretty quick, as it's pretty fascinating and written in vignette-style that basically makes it a bunch of short stories with an over-riding theme. And who doesn't like reading about the Apocalypse?