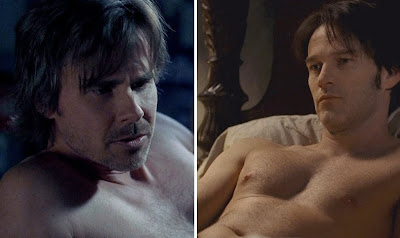 From an interview with Sam Trammell, the dude who plays Sam Merlotte on True Blood, via io9:

When asked about the rumored Vampire Bill/Sam Merlotte sex scene, Sam only replied:

"The cat is out of the bag. I can't say anything more than that… because people want to be surprised, but there is something that people will be talking about."

.
This is fine and all, hell it could be more than fine, but I need more chatter about what's going on with Alexander Skarsgård's whole gay thing this season. Oh, Eric! Anyway I'm happy to hear Season Three's gonna up the queer quotient since Two was so seriously lacking in this department. Do right by us, Alan Ball!
.
Who? Jason Adams When? 12:26 PM