Yup, this is what it sounds like! In lieu of my weekly Thursday's Ways Not To Die series, this week, whilst smack dab in the center of my 2009 Pantys I'm gonna award a little gore-flecked statuette to my favorite death scenes from the year that was. The year that died, so this post could be reborn!

And now, a warning (Now a warning???): yonder be big spoilers for the assorted films. Like, some big ones. Like, people dying and shit! Who died, where they died, how they died! With pictures, and brief (inane) commentary. I'm keeping the pictures and the (inane) commentary brief because one day I might wanna do a proper Ways post for some of these deaths. But all the same, this might ruin some shit for you, so if that sorta things pisses you off you've been warned. My hands are clean! (Save the usual squalor.) 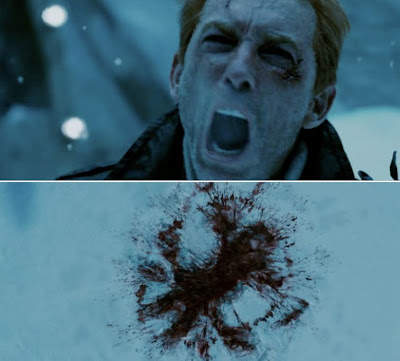 Rorschach gets finger-zapped by Doc Manhattan, Watchmen - This one has nothing to do with the gore, or the special effects, or anything except for Jackie Earle Haley's delivery of his final lines. His face bunched into despair. "What's one more body amongst the foundations? Well, what are you waiting for? Do it. DO IT!" Heartbreaking bastard.

Love hurts (but hate does more), Inglourious Basterds - I've already tossed affection at two other death scenes in Basterds - my beloved Bear Jew, and Hugo Sitglitz ramming his fucking fist down a Nazi's fucking face - but like with all QT pics there are bunches to love on, so I picked this scene for here because it hit me with an emotional wallop those other two don't even approach. Seriously. I might've cried, is what I'm getting at. 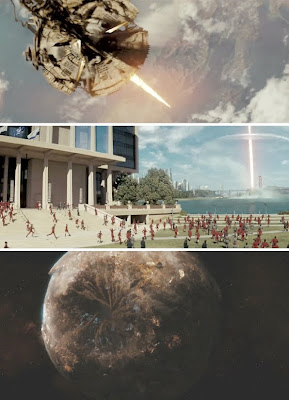 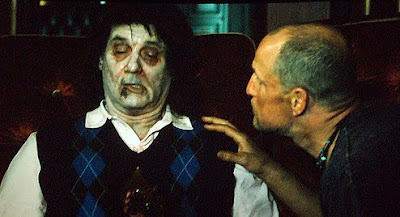 Bill Murray's zombie playtime goes terribly, terribly wrong, Zombieland - My bud Sean hated this part of the movie and mentally checked out after it, and he argues a good argument why, something that didn't really occur to me at the time. It's a cheap laugh, and doesn't fit with the rest of the film tonally at all. But as a scene all on its own, it's my favorite in the film (but I wasn't all that nuts about the film as a whole either). I mean, Bill fuckin' Murray! 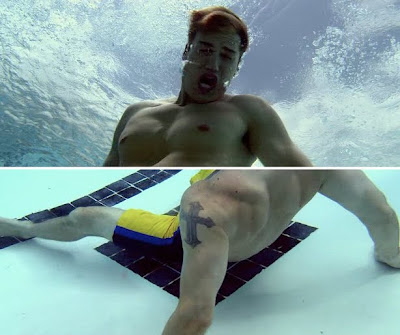 Nick Zano's reenactment of the story "Guts" by Chuck Palahniuk, The Final Destination - I've promised that this is a death scene I'll give proper full post treatment to some day so I'm not saying much. Except GODDAMN. Out of all the ridiculous death in TFD this one's the keeper. I just wish they'd been a little more explicit about what's going on. I mean, they're going there! So go all the way there, man!

The curse wins, Drag Me To Hell - I had to include this one obviously, it's probably my favorite out of all of them, but it's the one I feel the most queasy about spoiling if somebody hasn't seen the film yet. But if someone hasn't seen the film by this point, I don't know what to do with you, you are a part of the problem. That Raimi had the balls to do it! Man! It still drives me wild with glee. The lovely lass we just spent ninety minutes rooting for gets her fucking face melted off by demon arms and disappears down to Hades for eternity! The End. WHAM! Gah I love it so much.

A naked chick, a midget and a man with a very large pick-axe enter a hotel room, ba dum bum, My Bloody Valentine 3D - What more can I add than that description offers? The first half an hour of this slasher remake is totally solid, and this scene, starting with Betsy Rue in her entire entirety storming around like a fucking drill sergeant until darling little Selene Luna (The Cho Show) stumbles into the mix... it's... oh it's something to behold. 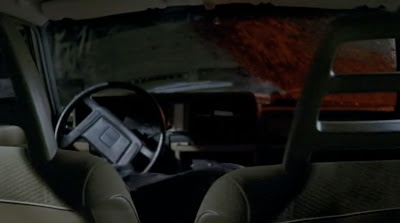 No she isn't the babysitter, The House of the Devil - Can't even talk about this scene. Hated even grabbing the frame for it. Made me actually jump out of my seat when it happened (and then rewind the film three times to make sure I'd seen what I'd seen).

Tae-ju discovers her potential, Thirst - We see Tae-ju kill a couple people before this moment, as she realizes just how much she fucking just adores being evil, but none are so sudden and insane as this. This is no side character - this dude's been part of the comic relief the whole movie long! And one quick palm-jab later, he's the proud papa of a flip-top head. Damn. 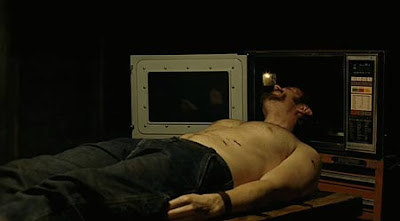 Garrett Dillahunt's head in the broken microwave, The Last House on the Left - Alright so this last second scene in the film got a whole lotta flack when the film came out because the film until that point had been extremely critical of violence and its effects. That's the entire point of the story after all. And then suddenly this gratuitously gory moment's tacked on right at the end, sending the audience out on a bloodthirsty high when the film's been arguing against that the whole time. Well bollocks to that noise. I was iffy about it muddying up the message at first, but then I realized that the last thing I should be desiring is my horror to behave responsibly. Blow his head off in a sparking microwave! Boo yeah!


And this post is dedicated to the psychotic gun-wielding stripper that gets shot through the fake boobs and silicone comes oozing out in Crank: High Voltage - since I can't be sure this killed her it don't count here, but it was the most ridiculously outrageous piece of violence I saw all year and for that, well, props to you, movie. 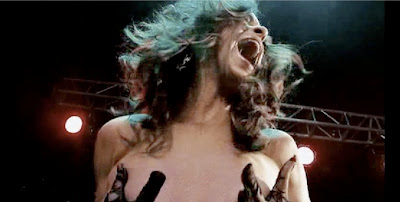 What about the sleeping bag or dock scenes in Friday the 13th? I know you hated that movie, but they were pretty good kills...

I really did consider the sleeping bag death. It was one of the few in the film that felt like it belonged in a Friday movie. It was on my short-list. Dick Casablancas on the boat getting an arrow in the head too.

The judge in Law-Abiding Citizen. I can only assume that you didn't see the film. Why else would it be missing?

BTW, that and the one moment in Edge of Darkness (you'll know it when you see it) actually made me scream out 'Fuck!' in a crowded theater.

Rorschach is definitely the most epic.