Daisies Ways Not To Die #2 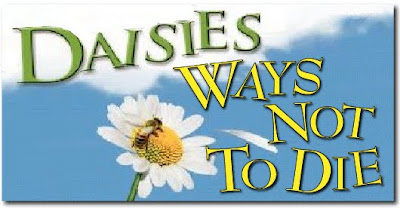 The facts are these! Pushing Daisies creator Bryan Fuller has kindly, amazingly agreed to take over MNPP's "Thursday's Ways Not To Die" series every third Thursday of the month to chat with us about one of the death scenes from the beloved series. There's more of an introduction here in the inaugural post, but let's just dive right into this week's installment, shall we? We shall! 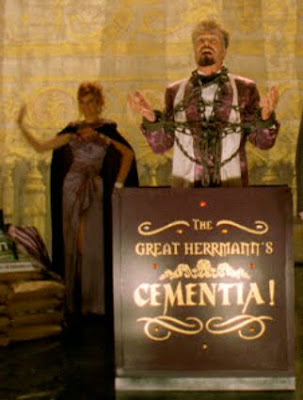 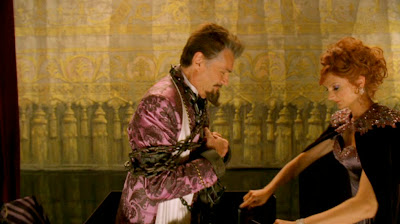 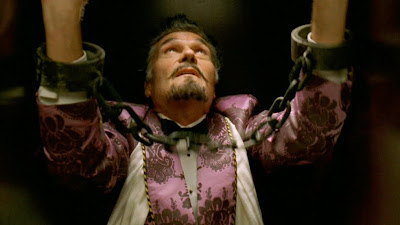 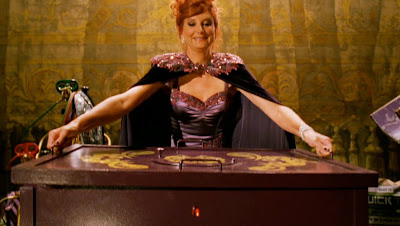 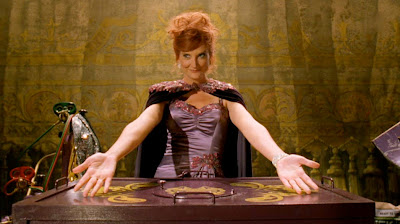 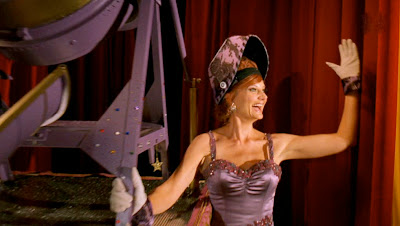 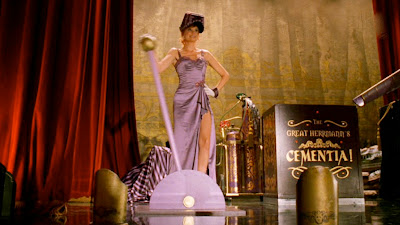 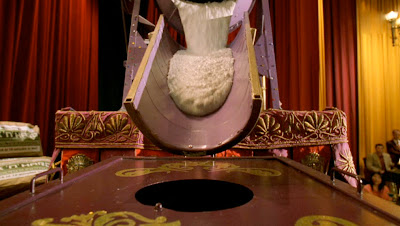 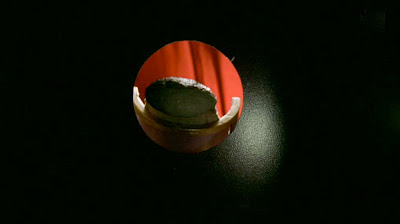 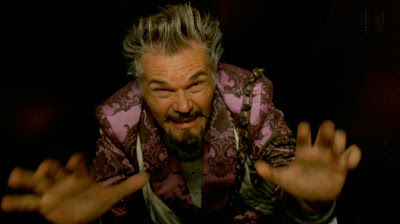 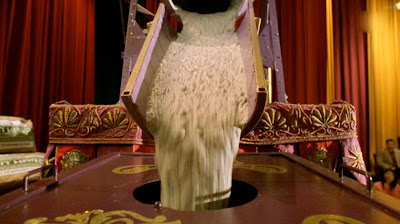 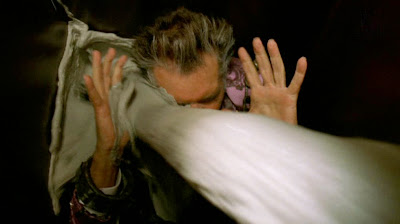 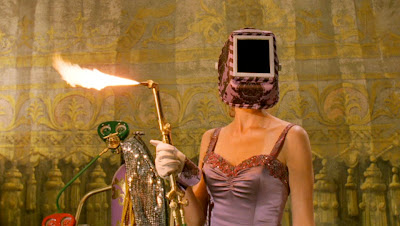 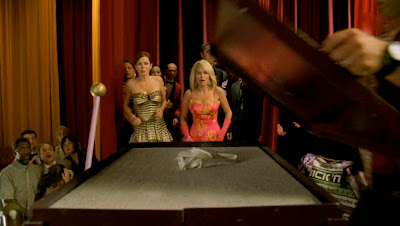 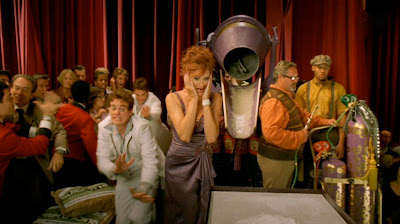 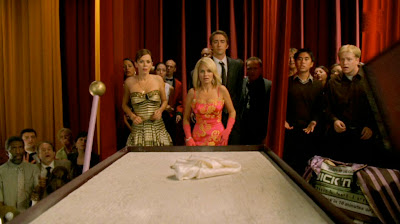 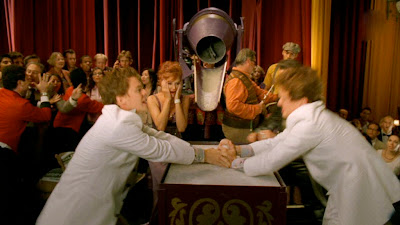 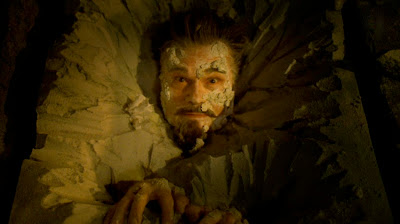 Pushing Daisies
Episode #15 - "Oh Oh It's Magic"
This is a death that's shown in bits and pieces throughout the episode, so my apologies if anything seems unclear the way I edited the frames together. Basic gist: The magician The Great Hermann (Fred Willard) gets in a box that he's supposed to escape from before it fills with cement and he doesn't and he's crushed in cement, Ta-dah!

And this week's "Daisies Ways Not To Die" is devoted to those fine fanatical folks over at Television Without Pity, where they recently held a tournament based off of the death scenes in Daisies and this death scene won for the second season. Like The Great Hermann, I might not be made of hugs, but I can give a little something-something back now and then.
But let's get to the meat on these here bones:
what show creator Bryan Fuller has to say on it. Shall we?
MNPP: Where did the inspiration for this death come from? The serial-killer-esque scrapbook of real life deaths tucked under your mattress, or just birthed from a fertile imagination? 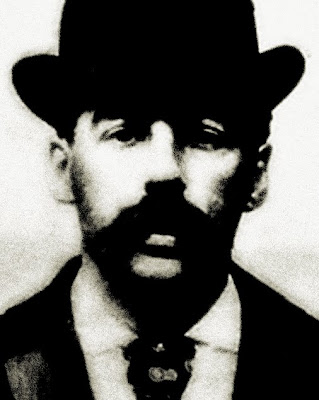 Bryan Fuller: My serial-killer scrapbook is actually next to the toilet, not under my mattress. And the inspiration for this episode came from one of our writers, Scott Nimerfro, who pitched a Houdini’s house of death style episode based on the H.H. Holmes house slash castle in turn of the century Chicago. As we started to flesh out that version of the story, we quickly realized we couldn’t do it well with our budget and opted for something a little smaller and more produceable for television.

MNPP: And what came first when writing the episode – the idea for this way of dying, or the setting / plot surrounding it?

BF: With almost all of the episodes, the arena came first – in this case, since it was a Magic Castle style world, we knew the death was going to be a magic trick gone awry. 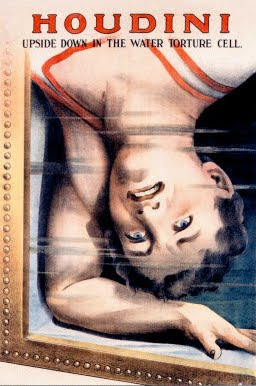 Following that through line we considered just about every trick from daggers in a box to being sawed in half and then onto Houdini’s water chamber trick. We settled on being entombed and over-complicated the gag at first. Initially we modeled the Great Hermann’s magic trick after one of those science experiments we did as kids that turn liquids into solids – The Great Hermann was to be encased in a liquid that the killer would turn solid and subsequently crush him in the process – but that proved messy and contrived for a stage show spectacle. Simpler was better and aggravated CEMENTIA was born. 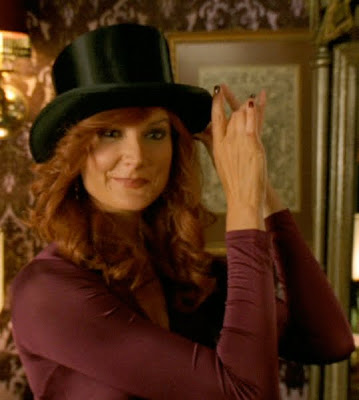 BF: There was a delightfully un-politically-correct conversation I had with Kerri Kenney about children and their naïve, confrontational racism.

Then there was Anna Friel’s feathered opera cape that ruffled some feathers. One of our execs called her Big Bird after seeing dailies, which prompted me to blurt B’GAWK every time the cape came on screen in the editing bay – to the chagrin of our editor. 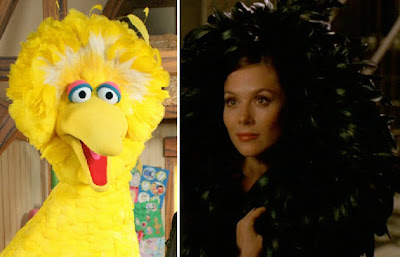 Also, Pushing Daisies has a very specific, tightly clipped pace – which wasn’t necessarily Fred Willard’s pace (wonderful and amazing to work with, by the way), who has a certain swaggering charm. 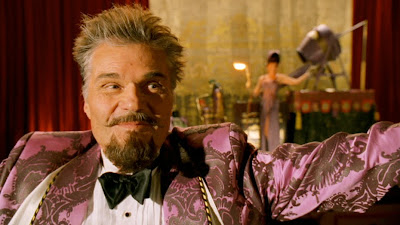 To match his pace with the Daisies cast (who were more used to the rate and speed of dialogue), we actually ended up “vari-speeding” his performance in post to give it the Daisies clip – often as much as twenty percent.

MNPP: Were there any winks and/or nudges intended towards other shows / movies or pop culture iconography that inspired the scene?

BF: We were definitely going for a “ooooooooo, he’s been frozen in carbonite” flavor for the Great Hermann’s death.

MNPP: Was there anything you couldn’t show because of network restrictions?

BF: Not in this particular episode, which ended up being one of the network’s favorites. Even our ball-breaking standards and practices representative liked it.

MNPP: On a scale of natural causes to being struck by a falling space-station toilet seat, how bad a death do you consider this to be? If you had to pick one of your deaths as your way of going, would this be the one? 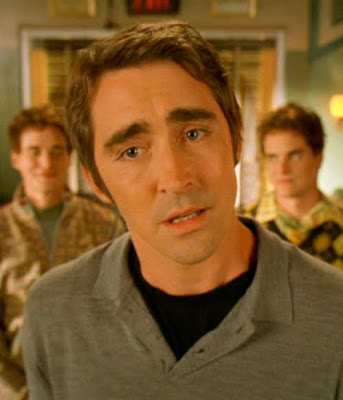 BF: Choking on cement isn’t my idea of a good time (although it beats being deep-fat-fried), so I’m still going to go with the lovely instantaneousness of the toilet seat death if given my dithers. If only we had done an episode about an abruptly fatal orgasm-induced aneurysm.

--------------------------------------
Previous Ways Not To Die: Boo! Nun! -- 2009's Ways Not To Die -- Bug Scratch Fever -- Daisies Ways #1 - Deep Fat Fried in My Own Unique Blend of 500 Herbs & Spices -- By the Yard End of the Stick -- Screwed From A Very Great Distance -- A Righteous Bear-Jew Beatdown -- Fisted By Hugo Sitglitz -- Xeno Morphed -- Fuck-Stuck -- A Vengeful Elevator God: Part 4 -- Lava Bombed -- The Cradle Will Rock... Your Face Off!!! -- The Food of the Nilbog Goblins -- The Slugs Is Gonna Gitcha -- Phone Shark -- Hide The Carrot -- Sarlacc Snacked -- Avada Kedavra!!! -- Hooked, Lined and Sinkered -- "The Libyans!" -- Axe Me No Questions -- Pin the Chainsaw on the Prostitute -- The Wrath of the Crystal Unicorn -- The Ultimate Extreme Make-Over -- Drown In A Sink Before The Opening Credits Even Roll -- The Dog Who Knew Too Much -- Don't Die Over Spilled Milk -- Inviting the Wrath of Aguirre -- An Inconceivable Outwitting -- The Five Point Palm Exploding Heart Technique -- Nipple Injected Blue Junk -- Your Pick Of The Deadly Six -- Thing Hungry -- Don't Fuck With The Serial Killer's Daughter -- DO Forget To Add The Fabric Softener -- Any Of The Ways Depicted In This Masterpiece Of Lost Cinema -- Rode Down In The Friscalating Dusklight -- Good Morning, Sunshine! -- Mornin' Cuppa Drano -- The Cylon-Engineered Apocalypse -- Tender-Eye-zed -- Martian Atmospheric Asphyxiation -- Maimed By A Mystical Person-Cat -- The Sheets Are Not To Be Trusted -- Handicapable Face-Hacked -- I Did It For You, Faramir -- Summertime In The Park... Of A Pedophile's Mind -- A Vengeful Elevator God: Part 3 -- Strung Up With Festive Holiday Bulbs By Santa Claus Himself -- A Vengeful Elevator God: Part 2 -- A Vengeful Elevator God: Part 1 -- Decapitated Plucked Broiled & Sliced -- Head On A Stick! -- A Trip To The Ol' Wood-Chipper -- Pointed By The T-1000 -- Sucking Face With Freddy Krueger -- A Pen-Full Of Home-Brewed Speed to The Eye -- Motivational Speech, Interrupted -- A Freak Ephemera Storm -- When Ya Gotta Go... Ya Gotta Go -- Hoisted By Your Own Hand Grenade -- Having The Years Suction-Cupped Away -- Criss-Cross -- Turned Into A Person-Cocoon By The Touch Of A Little Girl's Mirror Doppleganger -- Satisfying Society's "Pop Princess" Blood-Lust -- Done In By The Doggie Door -- Tuned Out -- Taking the 107th Step -- Rescuing Gretchen -- Incinerated By Lousy Dialogue -- Starred & Striped Forever -- Vivisection Via Vaginally-Minded Barbed-Wire -- Chompers (Down There) -- Run Down By M. Night Shyamalan -- Everything Up To And Including The Kitchen Toaster -- Sacrificed To Kali -- Via The Gargantuan Venom Of The Black Mamba Snake -- Turned Into An Evil Robot -- The Out-Of-Nowhere Careening Vehicle Splat -- "Oh My God... It's Dip!!!" -- Critter Balled -- Stuff'd -- A Hot-Air Balloon Ride... Straight To Hell!!! -- Puppy Betrayal -- High-Heeled By A Girlfriend Impersonator -- Flip-Top Beheaded -- Because I'm Too Goddamned Beautiful To Live -- By Choosing... Poorly... -- Fried Alive Due To Baby Ingenuity -- A Good Old-Fashioned Tentacle Smothering -- Eepa! Eepa! -- Gremlins Ate My Stairlift -- An Icicle Thru The Eye -- Face Carved Off By Ghost Doctor After Lesbian Tryst With Zombie Women -- Electrocuted By Fallen Power-Lines -- A Mouthful Of Flare -- Taken By The TV Lady -- Bitten By A Zombie -- Eaten By Your Mattress -- Stuffed To Splitting -- Face Stuck In Liquid Nitrogen -- Crushed By Crumbling Church Debris -- Bitten By The Jaws Of Life -- A Machete To The Crotch -- Showering With A Chain-Saw -- In A Room Filled With Razor Wire -- Pod People'd With Your Dog -- Force-Fed Art -- Skinned By A Witch -- Beaten With An Oar -- Curbed -- Cape Malfunction -- In The Corner -- Cooked In A Tanning Bed -- Diced -- Punched Through The Head -- Bugs Sucking On Your Head
...
Who? Jason Adams When? 12:30 PM

That is wild that they sped up Fred Willard to match the show's pace! Had no idea they could do that with just audio (and not video) and keep it from being noticeable. Props to the editors for the deft touch.

Thinking back to this episode, I liked how they used the handkerchief to make it clear that this time, he was actually still in the cement. Creative, since there was other way to make that clear.

(Side note: I did not know that "Handkerchief" is spelled with a "d" in there until the spell-catcher told me so. Kind of like "prerogative," you say it one way but there's a stealth consonant.)

Oh this was great! I especially loved the shoutout to the survival games on TWoP. I wasn't part of the one you specifically referenced, but since I was part of several others I still feel like a recipient of your shoutout :)

No news on the comics? Sad. I hope that will be a topic of conversation in March.