Straight Thru The Heart 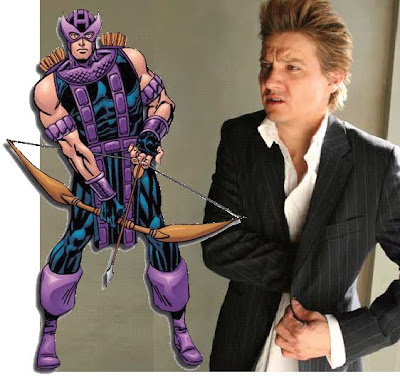 I'm sure there are people that have loved Jeremy Renner longer than I have, it wasn't until mid-2007 when I finally watched his performance in 2002's Dahmer that I caught on, but all the same I've got that dastardly feeling you get when you feel an ownership of something that you loved before the rest of the crowd did. Now everybody's cooing about him these days post-Hurt Locker and all I wanna do is yell, "He's mine!" Which is ridiculous, of course, but so much of what happens inside of my brain is ridiculous I don't bother differentiating anymore.

Point being, Renner's now reached that point in his career that every young-actor-on-the-upswing does, the comic-book superhero rumors. Via DH:

"Jeremy Renner ("The Hurt Locker," "S.W.A.T.") tells Empire Magazine that Marvel Studios is after him to appear as the superhero Hawkeye in at least one or two upcoming films from the studio.

"Hawkeye could be interesting. They're going to send me some stuff on it, see what it is, but I think they're pretty awesome, trying to make superhero movies almost plausible and not just some fantasy thing" say Renner about the character, a master archer

Asked which ones he would appear in, Renner says "If I was a betting man, I would bet that Hawkeye would probably show up in Thor, and then be in 'The Avengers' but do I know for sure? I can’t say. But I’d love for that to happen. It’d be fun."

He does however admit that nothing's set in stone or on paper as yet - "No offer has been made. I think there’s a little ways from that." He's understandably cautious as he has seemingly lost out the lead role in George Miller's "Mad Max: Fury Road" to Tom Hardy.

JA, you must see Renner in "12 and Holding" by Michael Cuesta whose first film was the incredible "L.I.E." with Paul Dano. He's a director worth noting; his films are really interesting and have a nice edge and recently I see that he's been helming eps of "True Blood." Anyway, do check that movie out. And I do hope that Renner gets some Academy love for "The Hurt Locker," a contender for best film of 2009 says me.

Given the character's history, if the Captain America movie takes place in modern times, Hawkeye's more likely to be there than the Thor movie. And then, yeah, Avengers makes sense.