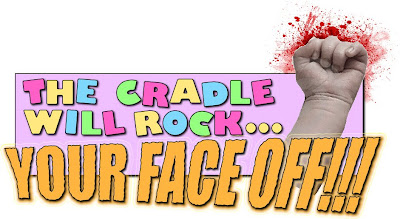 This is a subject I've brought up before and if you're a horror fan you surely know what I'm talking about - we sift through a whole lotta excrement for teeny tiny specks of gold. Hours upon hours upon hours of my life have been wasted watching completely horrible attempts at making a movie - sometimes you wonder if these people are even holding the camera in the right direction, and if they are, maybe could they just turn it around and film the craft services table instead, because something, anything, going on that way has got to be more fascinating then what they are actually filming - but then wham, a moment happens, and maybe the entire excruciating experience isn't forgiven, but you feel a smidge better. Like you've actually suffered in the name of something. Like you're Jesus, and shit.
Anyway, such a moment happens about 3/4s of the way into the execrable 2008 remake of Larry Cohen's itself-rather-exhausting It's Alive (a previous recipient of a Ways Not To Die itself) and I am just going to spoil it for you because really, I suffered through the film so you do not have to. Rejoice in my name. And shit.

Here goes: blah blah mom (played by Bijou Phillips) has her evil baby, blah blah baby starts rampagin', blah blah mom's friend comes over to spell out to us the bullshit reason why the baby's evil (mom tried to abort the baby with some janky pill and it didn't work, the end), blah blah mom and friend fight, blah friend leaves, blah friend hears a weird noise in the back of her pick-up and goes to investigate...

It's Alive (2008)
It's maybe a little difficult to tell what's happening there - hard to believe a movie this unbearable might have shoddy CG as well, isn't it? - so let me just spell it out: the baby's fist is exploding out the lady's mouth. It apparently has punched through her head. Nevermind that on top of being super-strong and carnivorous this baby must also have Inspector Gadget-esque Extendo-Arms to be able to reach all the way through a full-grown lady's head - logic aside (and I can't even believe I'm invoking the word "logic" in relation to this film), it's a baby punching through a lady's head. That's a fucking keeper. 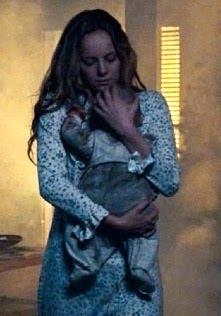 As an aside, this is something I was trying to discern while watching this movie (since the film itself could hardly keep my interest) - why the hell do I like Bijou Phillips? I do, I like her a bunch, she's the reason I even wanted to watch this movie in the first place, and I have no idea why. NO IDEA. She just inexplicably charms me. It's a mystery! So let's perform a highly scientific test...

.
poll by twiigs.com
.
--------------------------------------
Previous Ways Not To Die: The Food of the Nilbog Goblins -- The Slugs Is Gonna Gitcha -- Phone Shark -- Hide The Carrot -- Sarlacc Snacked -- Avada Kedavra!!! -- Hooked, Lined and Sinkered -- "The Libyans!" -- Axe Me No Questions -- Pin the Chainsaw on the Prostitute -- The Wrath of the Crystal Unicorn -- The Ultimate Extreme Make-Over -- Drown In A Sink Before The Opening Credits Even Roll -- The Dog Who Knew Too Much -- Don't Die Over Spilled Milk -- Inviting the Wrath of Aguirre -- An Inconceivable Outwitting -- The Five Point Palm Exploding Heart Technique -- Nipple Injected Blue Junk -- Your Pick Of The Deadly Six -- Thing Hungry -- Don't Fuck With The Serial Killer's Daughter -- DO Forget To Add The Fabric Softener -- Any Of The Ways Depicted In This Masterpiece Of Lost Cinema -- Rode Down In The Friscalating Dusklight -- Good Morning, Sunshine! -- Mornin' Cuppa Drano -- The Cylon-Engineered Apocalypse -- Tender-Eye-zed -- Martian Atmospheric Asphyxiation -- Maimed By A Mystical Person-Cat -- The Sheets Are Not To Be Trusted -- Handicapable Face-Hacked -- I Did It For You, Faramir -- Summertime In The Park... Of A Pedophile's Mind -- A Vengeful Elevator God: Part 3 -- Strung Up With Festive Holiday Bulbs By Santa Claus Himself -- A Vengeful Elevator God: Part 2 -- A Vengeful Elevator God: Part 1 -- Decapitated Plucked Broiled & Sliced -- Head On A Stick! -- A Trip To The Ol' Wood-Chipper -- Pointed By The T-1000 -- Sucking Face With Freddy Krueger -- A Pen-Full Of Home-Brewed Speed to The Eye -- Motivational Speech, Interrupted -- A Freak Ephemera Storm -- When Ya Gotta Go... Ya Gotta Go -- Hoisted By Your Own Hand Grenade -- Having The Years Suction-Cupped Away -- Criss-Cross -- Turned Into A Person-Cocoon By The Touch Of A Little Girl's Mirror Doppleganger -- Satisfying Society's "Pop Princess" Blood-Lust -- Done In By The Doggie Door -- Tuned Out -- Taking the 107th Step -- Rescuing Gretchen -- Incinerated By Lousy Dialogue -- Starred & Striped Forever -- Vivisection Via Vaginally-Minded Barbed-Wire -- Chompers (Down There) -- Run Down By M. Night Shyamalan -- Everything Up To And Including The Kitchen Toaster -- Sacrificed To Kali -- Via The Gargantuan Venom Of The Black Mamba Snake -- Turned Into An Evil Robot -- The Out-Of-Nowhere Careening Vehicle Splat -- "Oh My God... It's Dip!!!" -- Critter Balled -- Stuff'd -- A Hot-Air Balloon Ride... Straight To Hell!!! -- Puppy Betrayal -- High-Heeled By A Girlfriend Impersonator -- Flip-Top Beheaded -- Because I'm Too Goddamned Beautiful To Live -- By Choosing... Poorly... -- Fried Alive Due To Baby Ingenuity -- A Good Old-Fashioned Tentacle Smothering -- Eepa! Eepa! -- Gremlins Ate My Stairlift -- An Icicle Thru The Eye -- Face Carved Off By Ghost Doctor After Lesbian Tryst With Zombie Women -- Electrocuted By Fallen Power-Lines -- A Mouthful Of Flare -- Taken By The TV Lady -- Bitten By A Zombie -- Eaten By Your Mattress -- Stuffed To Splitting -- Face Stuck In Liquid Nitrogen -- Crushed By Crumbling Church Debris -- Bitten By The Jaws Of Life -- A Machete To The Crotch -- Showering With A Chain-Saw -- In A Room Filled With Razor Wire -- Pod People'd With Your Dog -- Force-Fed Art -- Skinned By A Witch -- Beaten With An Oar -- Curbed -- Cape Malfunction -- In The Corner -- Cooked In A Tanning Bed -- Diced -- Punched Through The Head -- Bugs Sucking On Your Head
.
Who? Jason Adams When? 12:01 AM

Speaking of great deaths in shitty movies, this weekend I saw the AWFUL MTV original movie "My Super Psycho Sweet 16", which was awful, naturally, but featured a truly awesome death:
A teenager on rollerskates (the titular Sweet 16 takes place at a roller rink, you see) is rushing to warn the rest of the party about the killer, when the killer pops out and chops her head right off with an ax. AND THEN, somehow, her headless body manages to maintain its composure and stand upright, rolling along on the rollerskates, until the corpse flies into a giant cake made out of sushi! And it's all shown in slow motion! Highly recommended for all.