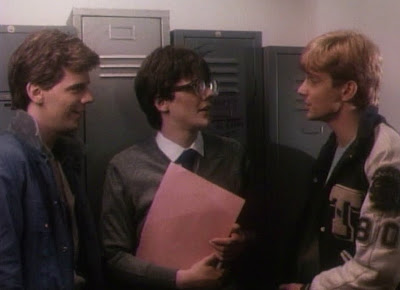 I feel the need to chime in on today's Final Girl Film Club pick of 1986's Slaughter High even though I totally forgot to re-watch the movie over the weekend and it's been many a year since I did watch it so my memory is pretty vague. But see, Slaughter High holds an esteemed place in my heart. 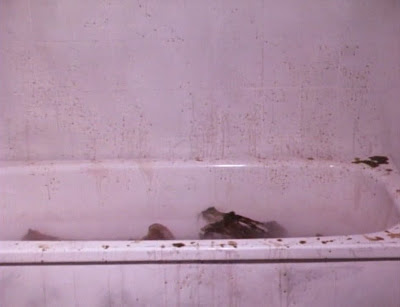 It's the first slasher movie I ever saw.
Not the primest of first picks, to be sure. But my cousin and I were renting all sorts of crap in this period. He just wanted to see boobs, and me... well I would watch any movie (so no, I haven't much changed). And anyway movies that had boobs in them sometimes had hot guys too (a theory I soon perfected with the Friday the 13th movies). 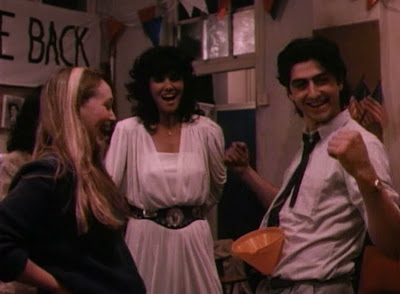 We'd worked our way through most of the cheesy 80s sex comedies (Oh Zapped!, sweet Zapped!) on the shelf at the local VHS-mart but needed more! More boobs, and whatever came with them! And somehow Slaughter High was the tape that leapt off the shelf at us in the horror section. I don't know why exactly - it certainly didn't have anything approaching Cheerleader Camp's under-boob saddled cover. But the film did end up having boobs, much to my cousin's excitement, and it introduced me to the downtrodden and sleazy genre that I came to adore, the Slasher. 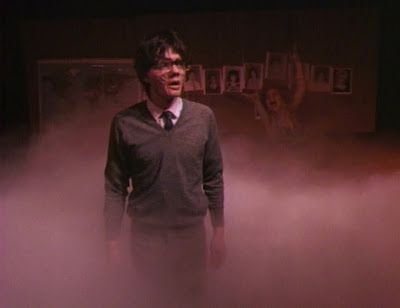 And even though there was that whole "He's a crazy psychopath" thing, it introduced me to a vital aspect of my Slasher-adoration, something that got me through some very very painful High School years - the nerd-getting-sadistic-revenge plot. The popular kids in SH are some of the most unlikable stupid douche-bags in the history of ever, and they torture Marty so thoroughly that, well, it gave my tormented self a healthy outlet (i.e. it wasn't me doin' the killin', but fictional characters) for the put-upon aggression I was feeling in real life, by watching Marty pick the pricks off one by one.

The assholes had it coming!
So I owe you a thank you, Slaughter High. Thank you. Thank you for bringing me into the fold. And for that part with the lawnmower. I love the stupid stupid scene with the lawnmower! That's got an eventual Ways Not To Die written all over it. I mean, the guy just lays there and let's a riding lawnmower be lowered onto him! 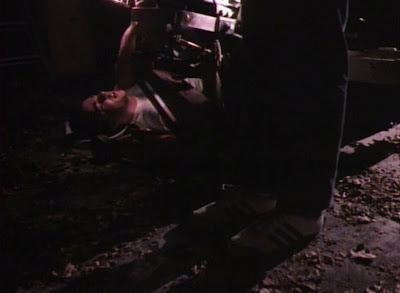 Well, to be fair, he tries to hold it up, but mean old Marty starts cutting his wrists. What a bully!

But the scene goes on so long! I always feel like he has a thousand chances to just roll the hell over. Or scoot! Scoot, dummy! Don't just lower the thing on yourself for the love of crappy horror movies!